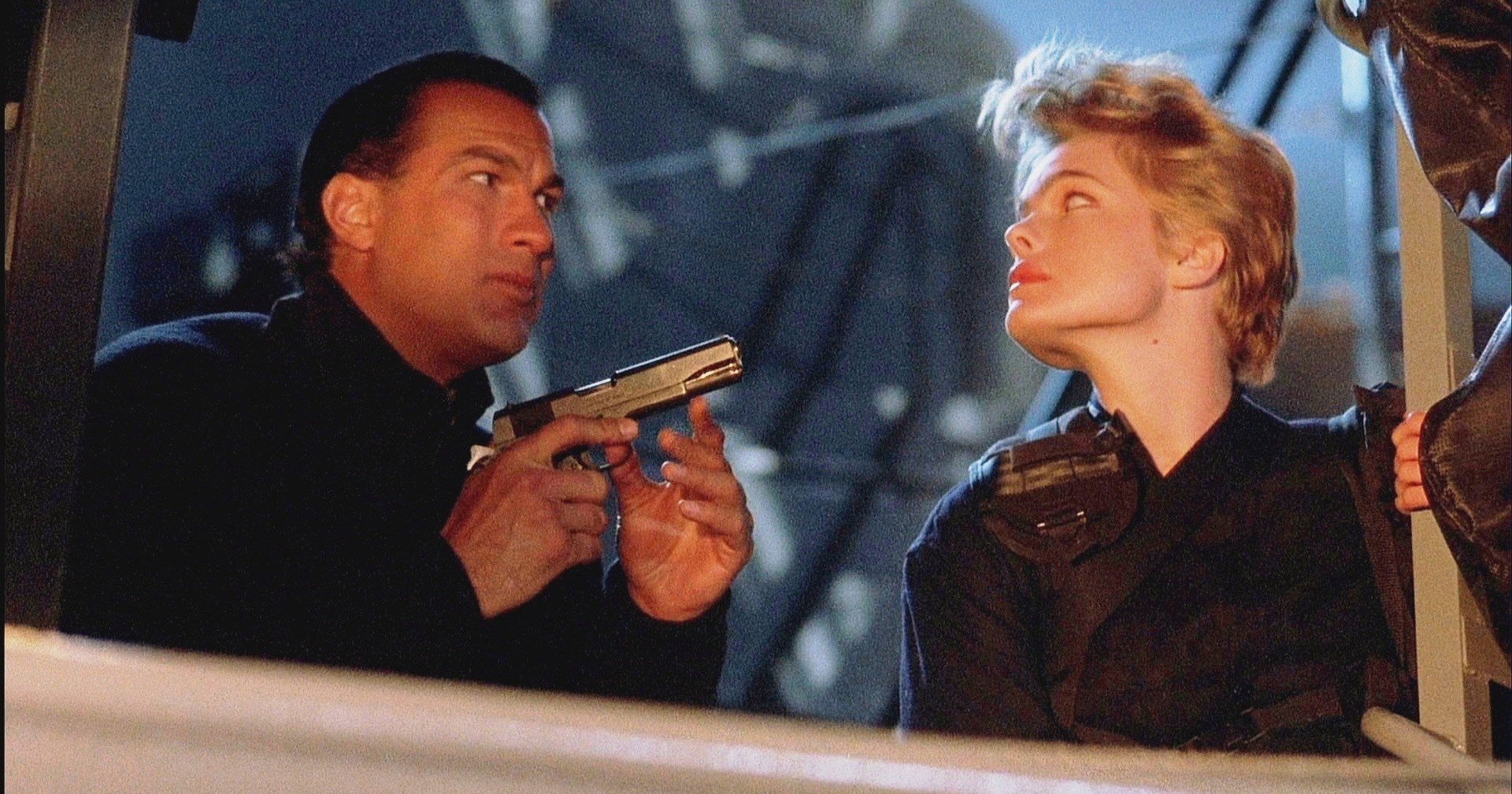 Under Siege is by far the second best Steven Seagal movie, but untold until now is the story of how the Pentagon rejected the script and refused to provide production support, only to then end up providing some anyway.  While the film does contain some embarrassing moments from a Pentagon PR point of view, its core storyline is one of a highly-trained special forces operator who almost single-handedly liberates a hijacked US warship.  This is probably why they bent the rules for Under Siege, allowing for considerable ‘courtesy’ support despite having officially turned down the film.

Produced by former Israeli spy Arnon Milchan and directed by Andrew Davis (who also directed Seagal’s film debut, the Iran-Contra conspiracy thriller Above the Law) Under Siege is a surprisingly sophisticated cheesy action film.  On the surface it is Die Hard on a battleship, as critics identified at the time, but it is also a well paced, funny adventure topped off with a generous dollop of politically controversial material.

The plot centres around a former CIA black operative who teams up with the XO of the USS Missouri in order to take over the ship and transfer its nuclear-tipped Tomahawk missiles onto a stolen North Korean submarine.  Aside from portraying a naval officer as a traitor who tries to steal nuclear weapons, several other aspects of the script were problematic from a DOD perspective.

Script problems in Under Siege

While the available documents do not specify the Navy’s objections they record how the Navy made ‘script recommendations that weren’t taken’ and hence ‘held back on not giving them all they want’.  These recommendations most likely related to (1) The depiction of the ease of stealing US nuclear weapons, (2) The presence of pornography on the ship, (3) Gary Busey as the XO cross dressing for a birthday party that is used as cover to take over the ship and (4) The presence of a Playboy playmate who leaps out of a cake, topless, before teaming up with Seagal to help take back control of the Missouri. As the film’s release approached the Navy put together Public Affairs Guidance to prepare their people to answer questions about why the film was turned down, among other questions:

The theatrical release of the Warner Brothers motion picture, Under Siege, will generate interest in Navy Surface Warfare operations and the nuclear weapons safeguard program

This included an anticipated question about the birthday cake scene, with a stock prepared response:

Q7. In the film, a topless dancer is supposed to jump out of a large birthday cake. Does the Navy condone this kind of activity?

A7. Navy policy is zero tolerance of sexual harassment or any activities that could be of a sexually demeaning nature.

As a consequence of these problems the Navy turned down the producers of Under Siege, so they filmed most of the movie on board the USS Alabama – a retired Navy vessel now serving as a museum ship.  The movie only qualified for ‘courtesy support’, but this included both pre-production and production assistance.  As one Navy document outlines:

The Navy provided courtesy assistance that included initial research assistance, limited technical assistance in the interests of realism (the film company hired their own technical advisors), access to the 50th anniversary ceremonies at Pearl Harbor in December 1991 (the same access given to the news media), and the coordination of some aerial overflights of the ship while underway.

How coordinating overflights of the Alabama to get all those lovely sweeping aerial shots of the ship is mere ‘courtesy’ support is beyond me.  On top of this, the Marine Corps also provided some help, and the DOD did a neat switcheroo to get around their own rules.

In early-mid 1992 Gordon Ecker Productions (who specialised in audio production) approached the Marine Corps wanting to record audio of a CH-46 helicopter and an F-18 fighter for use in Under Siege.  The Marines discussed the matter with the Navy, who basically said they’d turned down the film but had no objections to the Marines providing this support.  Phil Strub was consulted, who said he had ‘no problem’ with them ‘supporting a sound production company recording sound for resale’.

This presents an interesting quandary, given that they knew the sound was being recorded for a movie they had officially turned down.  If a company wants to record specific audio (or video) for use in a film being produced by a separate but associated company, there appears to be no need for a script review, or at least, the script review is irrelevant.  So a canny film-maker could divide up the support they wanted from the DOD, hire several outside companies to produce all the necessary footage and soundtrack, without ever submitting their script for DOD approval.  As long as it was all fairly standard material (fighters being scrambled, a squad doing a training assault course) one could get – in effect – full production support without ever going through the script review and production assistance agreement part of the process.

To my knowledge, no one has ever tried this.  But they should.