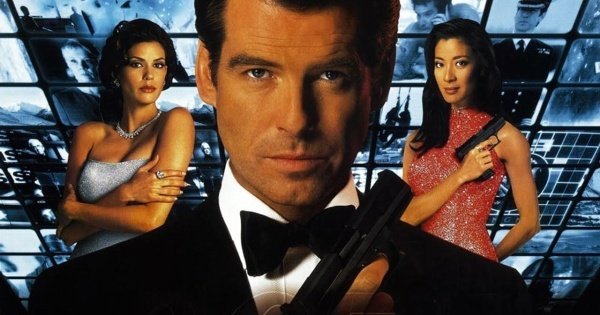 Tomorrow Never Dies is perhaps the most military-heavy Bond film of recent times, benefiting from production support from both the British and American armed forces.  Despite this the Pentagon’s Hollywood liaison Phil Strub denied that they provided any assistance to the film-makers.  This document proves that Strub is not telling the truth and provides new details of the negotiation struck between the producers and the Pentagon.

The Ministry of Defence headquarters do not appear in the film and instead the Bank of England and Somerset House – formerly the HQ for the admiralty and now home to the Inland Revenue – stood in for the MOD building.  However HMS Dryad (then home of the Royal Navy’s Maritime Warfare School) was used as a location and the ships HMS Chester, Devonshire and Bedford were all played by the real-life HMS Westminster.  Royal Air Force bases RAF Mildenhall and Lakenheath served as shooting locations, requiring permission from both the MOD and the DOD.  Lakenheath was also used for the earlier Bond film Octopussy and the poorly-titled making of documentary Inside Octopussy.

Credits from Tomorrow Never Dies thanking the MOD and DOD

The film also features a large number of aircraft.  The MH-53J helicopter and the McDonnell Douglas F-15E Strike Eagle in Tomorrow Never Dies were loaned to the producers by a US Air Special Operations Group.  Likewise the Fairchild C-123 Provider that Bond jumps out of over ‘Vietnam’ was probably provided by the US military but is not included in the Production Assistance Agreement.  Meanwhile the Aero L-39 Albatross that we see Bond flying in the opening sequence almost certainly came from the Russian government (the sequence was filmed in Russia).  The Eurocopter AS565 Panther was used almost exclusively by the French Navy while the ‘Chinese MiGs’ are actually Soviet-produced Mikoyan-Gurevich MiG-23s. In exchange for the use of filming locations and aircraft the Pentagon lobbied for changes to the script.  The agreement states:

DoD approved military assistance as in the best interests of the DoD, based on the February 19 1997 version of the script and subsequent changes to 248B, 248c and 248D…  The production company must obtain, in advance, concurrence from DoD for any subsequent changes to the military depictions… before it is exhibited to the public.

These changes were all made to the sequence where Bond meets up with CIA agent Jack Wade at a ‘US Air Base in the South China Sea’ which was actually RAF Lakenheath.  As Bond prepares for a HALO jump out of an aircraft near Vietnam the original script contained the line ‘You know what will happen. It will be war (with Vietnam), and maybe this time we’ll win’.  This joke was removed at Phil Strub’s request, though as Matt Alford wrote, ‘In an email to me, Strub claims there was no DOD cooperation on the film.’  This document proves that there was DOD cooperation, and also that they had no problem with Wade saying, ‘We have no interest in seeing World War III, unless we start it.’

Tomorrow Never Dies was originally going to film in Vietnam but there were legal snafus and doubts emerged about whether the country was adequately prepared to host such a large production, so they switched to Thailand.  James Bond winds up in Phang Nga Bay looking at Ko Tapu and Khao Phing Kan, popularly known as ‘James Bond Island’ after they featured as Scaramanga’s lair in The Man with the Golden Gun. The Production Assistance Agreement also reveals that at this time – 1997 – the entertainment liaison offices were based in the Wilshire Federal Building at 11000 Wilshere Blvd, Los Angeles.  Exactly when (and why) they moved to private offices at 10880 Wilshere is not clear.  Finally, one of the clauses in the contract states that the production company agrees to:

This does not say that alcohol, narcotics and hallucinogens are completely banned from DOD property, only that the cast and crew were not allowed to bring drugs and booze without sharing them with the DOD project officer.  Which, on balance, seems fair enough to me.