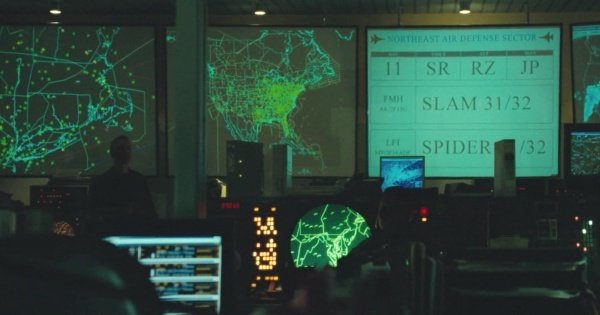 United 93 was the first and – to date – the only major movie to depict what happened in the skies over the US on the morning of the 9/11 attacks.   The film-makers intended it to be as accurate and realistic as possible, so they reached out to the Pentagon and the US Air Force in particular for assistance.  However, if anything this contributed to the numerous inaccuracies and problems with the narrative in the movie, as it contains a blend of two different stories told by the Pentagon about their responses on 9/11.

No script for United 93?  No problem!

The film was an unusual production for a variety of reasons.  It was the first big-budget movie about 9/11 at a time when that remained a raw and painful topic for the general public.  It also had no formal script, preferring instead to have the actors (and in some cases people playing themselves) improvise around the memories of the people responding to the attacks.  One important figure was Ben Sliney – the National Operations Manager for the Federal Aviation Administration.  He was apparently on his first day in the job when he had to co-ordinate responses to multiple hijackings.  Sliney appears in the film playing himself, acting out what he remembers doing that morning.

DoD has approved military assistance as in the best interest of the DOD, based on a teleconference discussion with director [redacted] and producer Lloyd Levin on 15 November 2005, in which Mr. [redacted] expressed his intentions to accurately and realistically portray the US military.

United 93 and the Air Defences

The issue here is that what constitutes an accurate and realistic portrait of the US military on the morning of 9/11?  The Pentagon has issued at least three different mutually contradictory accounts of what happened that morning.  Story #1 arrived in the days after 9/11 was that no interceptors were scrambled until after the Pentagon was struck at around 09:38.  Given that the first signs of trouble from the hijacked planes came shortly after 08:20 this is well over an hour into what was happening.  Why didn’t they respond more quickly?  The Pentagon blamed the FAA for not telling them early enough that aircraft were in trouble.

Then, when people said that this looked like a deliberate stand-down and reports emerged of jets being scrambled earlier, one week after the attacks NORAD issued a timeline (story #2).  This said that jets were scrambled before the Pentagon was struck, at 08:52 and 09:30, contradicting version 1.  Once again the implication was that they couldn’t get there in time, again blaming the FAA.  Curiously, the F-16s scrambled at 09:24 and airbourne at 09:30 were sent from Langley Air Force base rather than one closer to the action (and closer to the Pentagon, e.g.  Andrews).  Again, this attracted criticism and disbelief.

By the time of the 9/11 Commission report a new version emerged that claimed that the FAA did not notify the military about three of the hijacked planes until after they had crashed (into the South Tower of the WTC, into the Pentagon and into a field).  Story #3 contradicts versions #1 and #2, and has the convenient quality of making the military virtually blameless.  After all, if the FAA never told them about the second, third and fourth planes before they crashed then the Pentagon can bear no responsibility for not stopping them.

However, if this version is true then why is it the third version?  If this is what happened then this should have been represented in the timeline issued on September 18th 2001.  It should also have been reflected in the early testimony to the 9/11 Commission by Major General Larry Arnold and his close colleague Colonel Alan Scott.  Arnold was the commanding general of NORAD’s Continental Region and thus was integrally involved in the military response as the attacks unfolded.  Put another way – why did the military say a week after 9/11 that the FAA notified them about two of the planes before they crashed if the FAA did no such thing?  Even the two chairmen of the 9/11 Commission (Thomas Kean and Lee Hamilton) said that they thought the military were lying to them and considered referring the issue to the Justice Department for criminal charges.

So, what constitutes accuracy and realism as it pertains to this much-debated series of events?  How could the producers of United 93 represent these events accurately?  Which version of events did they tell?  And so, what was implicit in the assurances the DOD got from Levin and Greengrass?  An agreement to tell whichever version of events the Air Force technical advisors told them to tell?

What is the story in United 93?

BBC film reviewer and government suck-up Mark Kermode has made it one of his missions to debunk conspiracy theories.  Kermode has cited United 93 repeatedly as evidence that the alternative stories of 9/11 (that flight 93 was shot down, for example) are not true.  In a Guardian article Kermode wrote:

The film argued that the World Trade Centre was blown up from inside, that the Pentagon was struck by a cruise missile and that United Airlines Flight 93, in which terrorists were officially reported to have been overpowered by passengers, did not crash in Shanksville, Pennsylvania, but landed safely in Ohio.

This all sounded like baloney to me. But just to be sure, I contacted respected British film-maker Paul Greengrass, who’s putting the finishing touches on his thoroughly researched, fact-based docudrama, United 93. Greengrass’s film made headlines last week when trailers were reportedly pulled from New York cinemas. But controversy surrounding the movie was first sparked by conspiracy theorists who insist that flight 93 was actually shot down by the US air force and who dismiss the ‘official version’ of events as a lie. ‘9/11 has replaced the Kennedy assassination as the epicentre of this great upsurge of conspiracy theories,’ concedes Greengrass, ‘and flight 93 is right at the heart of it. Do I believe those conspiracies? No. The stuff about the plane being shot down is simply not true. But you have to ask why a document as exhaustive and accountable as the 9/11 Commission report has failed to dispel these myths.’

One of the main reasons is that the chairmen of the 9/11 Commission thought that the military were lying to them with their third story of what happened that morning, and so even they did not really believe the version they presented in their report.

The producers of United 93 manage to contradict the 9/11 Commission’s version (and the Pentagon’s story #3).  The narrative in the film features a blend of versions 2 and 3, with the military not notified about flight 175 until just after it hits the second WTC tower, but being notified about flight 77 well before it hits the Pentagon.  They also included some other elements of the third version, saying that the Langley jets were not ordered to intercept flight 77 (as per story #2) but were hunting ‘phantom flight 11’ which apparently was thought to still be airborne for nearly an hour after it was the first plane to crash.  Though this version did not appear in any form until the 9/11 Commission, three years after the events, it was incorporated into United 93.

The film’s version of why the military did not stop flight 93 is especially ludicrous.  We see the FAA find out that the plane was hijacked at 9:28, hearing sounds of the fight for the cockpit over the radio.  The FAA headquarters add it to their running list of known or possible hijacked planes.  A few minutes later the Pentagon is hit and the FAA responds by ordering a national groundstop – i.e. a grounding of all of the 4,000 planes in the air over the US at that time.  By this time the military liaison at the FAA has been told about flight 93, but for some reason no one tells NORAD, despite having notified them about earlier hijacked planes.  The film then follows the action on board the flight, uninterrupted, for about half an hour.  The film’s concluding captions say that military commanders were not notified about this flight until several minutes after it had crashed.  This is not only ludicrous, and means the FAA sat on the information for nearly 30 minutes even after three planes had crashed into buildings, but it is contradicted by numerous testimony and interviews saying that the military were tracking flight 93 and were ready to shoot it down.

Realism at the cost of Accuracy

The film is a great example of realism at accuracy’s cost.  By featuring so many scenes set on flight 93, where we see the victims eating their microwaved breakfasts and then later just looking scared and taking ages to do everything, Greengrass fills up the screen time with a load of distractions from this core question.  Every time we see someone on screen on flight 93 not really doing anything we should be asking ‘what were the military doing at that moment?’.  Instead, we get distracted by these painful but very realistic scenes so that when we eventually return to the military 10 minutes later we don’t notice that nothing has changed since the last time we checked in with them.

Doesn’t anyone care what NORAD are doing right now?

Indeed, as long as the film did this – portrayed the military as doing the best they could in a bad situation – it is probable that the Pentagon didn’t particularly care which elements of story #2 and story #3 they incorporated into the movie.  After all, most people are not even aware that the military has told three versions of events, let alone how absurdly they contradict one another.  Nonetheless, they believed this film, and believed the story that it told.  Perhaps this is why the military were happy to set aside their usual rules and work on an unscripted film – it represented a chance to codify this story in the popular consciousness.