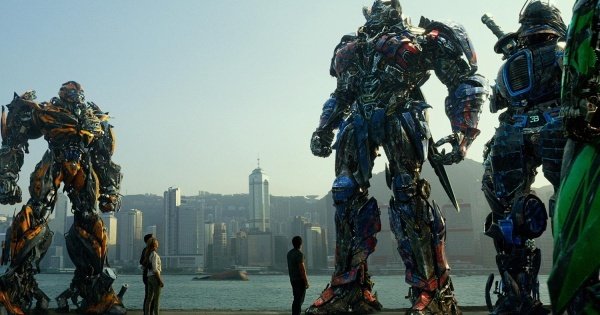 Despite only producing 4 films so far the Transformers series is already one of the top 10 movie series of all time.  In a paradox that encapsulates much of Hollywood, it appears that the worse the Transformers films get the better they do at the box office.  These production assistance agreements shed some light on how, just like the early films in the Marvel Cinematic Universe, the first three Transformers films benefited from large scale support from the Pentagon.

The first movie in the series was a great example of the new model for big studios in Hollywood.  They took an existing popular entertainment brand that had either never been done on the big screen before, or had not been done for a long time.  In the internet era this helps the product generate its own hype.  The fanboys act as force multipliers by posting their every prediction and expectation online, and giving their opinions about the ‘leaks’ and rumours that have by now become staples in the industry.

The film also incorporated an astonishing amount of product placement with over 60 major products being promoted.  With production costs spiralling (at the top level you now need $300-400 million to produce and market a movie) large scale product placement is one way to offset the risks of spending such vast sums before you’ve sold even a single ticket.  A word to the wise: when you see these stories that Batman v Superman or Spectre needed to make $900 million just to break even, they are fatuous nonsense.  The movie industry is doing just fine, and product placement is a big factor in that.  At least one film (Smurfs 2) has more than covered its own production budget before it was even released.

It is perhaps no coincidence that some of the most successful films when it comes to negotiating promotional deals are sponsored by the state.  Like Transformers, Man of Steel reportedly set a new record with $160 million in product placement contracts, which makes an otherwise mediocre box office performance into a resounding profit for the studio.  Both films were heavily supported by the US military, with the first Transformers film not only setting new records for product placement but also for the amount and range of military vehicles that appear.  Just as execs at Wells Fargo, Porsche and Beretta saw the potential for this film to be very popular, so did the DOD.  Sadly they were unable to find the production agreement for the first movie.  However, the wikipedia entry on the series does contain one very interesting paragraph:

Michael Bay was asked to direct by Spielberg on July 30, 2005, but he dismissed the film as a “stupid toy movie”. Nonetheless, he wanted to work with Spielberg, and gained a new respect for the mythology upon visiting Hasbro. Bay considered the first draft “too kiddie”, so he increased the military’s role in the story. The writers sought inspiration from G.I. Joe for the soldier characters, being careful not to mix the brands. Because Orci and Kurtzman were concerned the film could feel like a military recruitment commercial, they chose to make the military believe nations like Iran were behind the Decepticon attack as well as making the Decepticons primarily military vehicles. Bay based Lennox’ struggle to get to the Pentagon phoneline while struggling with an unhelpful operator from a real account he was given by a soldier when working on another film.

Transformers 2: Revenge of the Fallen

The huge-scale production placement and military support continued in the second film.  According Marine Corps ELO reports in February 2008 ‘Joint planning held Feb. 13 to discuss the military’s role in the sequel, due out in June 2009.’  Before the script was even written there were meetings between the different branches of the military and the film’s producers where the Pentagon tried to push for as big a role as they could get.  The size of the military support for the film was massive, with just the Marine Corps (not even the primary branch involved in the film) providing a CH-53 helicopter that was filming in various different places, soldiers to perform as extras in several scenes, multiple filming locations and they even staged a large amphibious landing at Camp Pendleton.  This one scene involved ‘(2) LCACs from ACU-5, (2) Tanks from 4th Tanks, (2) Cobras and (2) Hueys from 3rd MAW, (6) AAVs from AAV School, (2) LAVs and (50) Marines from 1st LAR’.

The Pentagon assistance agreement was signed based on a May 2008 draft of the script, which was not completed at the time.  This shows how the usual process of reviewing a finished script and only providing support once the screenplay is made acceptable to Phil Strub et al can be suspended when it is a production the military are very keen on.  It appears that virtually every facet of the instructions governing what the entertainment liaison offices are supposed to do are only adhered to when they feel like it.

However, it was the Air Force who again took on the primary role in Transformers 2.  The ‘Wish List’ attached to the agreement shows reads more like a shopping list of things Michael Bay wanted to blow up to create the maximum possible Bayistic experience for the audience. The total estimated cost (that the producers paid to the military) was over $600,000.  Among all the production assistance agreements I have seen this is the only one that provides a breakdown like this so how this compares to Man of Steel or other major military-supported films I can only guess, but it is likely in the same ballpark.

Transformers 3: Dark of the Moon

This was the last Transformers movie to involve the military and the Army’s ELO reports show how keenly involved they were in the production process.  In March 2010 they met with the producers and read the script and provided script notes and suggested changes.  Two weeks later:

All Service representatives met with the director, producer, and writer of the film to discuss the possibility of further changes.  Michael Bay was very receptive to our notes and expressed his desire for us to “help (him) make it better”.  As you know, TF2 was the biggest blockbuster of 2009 (Avatar’s revenues split ’09 and ’10) and the TF3 script is showing this “episode” will be no different. It will give us the opportunity to showcase the bravery and values of our Soldiers and the excellent technology of today’s Army to a global audience, in an apolitical blockbuster.

A few weeks down the line the Army facilitated a meeting between Paramount Pictures Worldwide Marketing Partnerships and the US Army Accessions Command advertising agency McCann Worldwide.

The purpose of the meeting was to make introductions and discuss opportunities for the US Army to leverage the success of the Transformers franchise.

This language shows how the Pentagon saw building up the Transformers film franchise as a strategic goal because it provided them with such valuable PR.  This was all before the production assistance agreement was finalised and signed and once again the agreement was struck based on a script that was still in development.  Clearly the Pentagon were confident that Bay would make all the changes they wanted and do pretty much whatever they said in exchange for military support.  The Army reports later record the extent of this support, noting:

However, the Marine Corps were not happy with the relatively small amount of screen time they received in Transformers 2, particularly after the complex amphibious landing scene they put together.  Their ELO reports state that from the off their attitude was to ‘move cautiously given amount of support versus amount of screen time on Transformers 2’.  One request for use of MV-22 Ospreys was turned down and they tried to get an increased role in the film in exchange for the limited support they did agree to provide.

Transformers: Age of Extinction and beyond

It appears that since the third film there has been no further Pentagon involvement in the Transformers films.  It may because of waning enthusiasm or the law of diminishing returns in terms of the propaganda value of essentially doing the same thing a fourth time.  Others have helped fill the void – NASA provided assistance on Transformers 3 and on Transformers 5, due out next year.  The fourth film in the series was co-produced with the China Movie Channel and much of the second half of the movie is set and was shot in China.

However, this has led to sticky situation with Wulong Karst Tourism, a Chinese state-backed travel company.  They had a product placement agreement with the producers of Age of Extinction which Michael Bay and the others failed to fulfil in the final cut of the movie.  As a result the company sued Paramount for $27 million in a case heard earlier this year.  I cannot find any reporting on the result of the hearing so perhaps it is subject to non-disclosure agreements.

However, it is a very important case due to the reliance of Hollywood blockbusters on a) product placement revenues and b) the ever-increasing Chinese film market.  It is possible that this year the total Hollywood income from China will be larger than from the US, for the first time.  Transformers 4 is the perfect example of this shifting market – it took nearly $250 million in the US, but around $320 million in China.

DOD Production Assistance Agreement for Transformers 2: Revenge of the Fallen

DOD Production Assistance Agreement for Transformers 3: Dark of the Moon