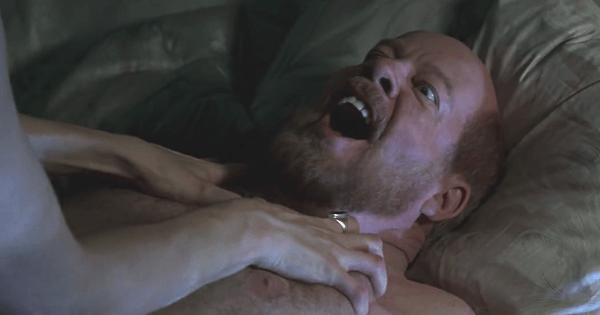 How the Pentagon rewrote Goldeneye

Goldeneye is possibly the best of the Pierce Brosnan James Bond films, but like two others in the Brosnan period it relied on US military support.  This entailed the Pentagon reviewing the script and demanding two changes – one political, one promotional – in exchange for helping to shoot one brief scene with uniformed soldiers and military vehicles.

Named after the house in Jamaica where Ian Fleming wrote the original Bond novels, the combination of a somewhat plausible real-world plot, strong performances from Brosnan and the new M Judi Dench, and Martin Campbell’s excellent direction maintained the more low-key formula of the Bond brand in recent incarnations.  Timothy Dalton, Brosnan and now Daniel Craig have all been real-world secret agents, particularly when compared to Roger Moore’s suave but ridiculous version of the character.

On reflection Goldeneye‘s plot is reminiscent of numerous 1990s action films – a rogue Russian officer looking to rise in power and wealth following the collapse of the Soviet Union hijacks some nukes and… therefore movie.  Only this time the nukes are in space (where else?) and can cause a massive electromagnetic pulse, wiping out all electronic systems in a certain area. The entire cast of bad guys, from Gottfried John’s Arkady Orumov to Alan Cumming’s Boris Grishenko are enjoyable, if a little cartoonish.  Sean Bean as the MI6 agent who turns traitor is exactly the same as in every other film where he plays a spy or a soldier – pretty good.

However the best characters in the entire film are the two Russian women – Bond girl Natalya Simonova (Izabella Scorupco) and Xenia Onatopp (Famke Janssen).  Naturally, neither were played Russian actresses.  Nonetheless, a Bond girl who actually stands up to Bond and a female assassin who fucks men to death both have a touch of mid-90s ‘Girl Power’ about them which remains entertaining to men and appealing to women.  While no one really remembers Christmas Jones (Denise Richards) from The World is Not Enough or whatever Halle Berry’s character in Die Another Day was called, Xenia Onatopp is  highly memorable for putting a new twist on an old Bond trope.

What did the Pentagon change in Goldeneye?

Two scenes concerned Phil Strub and the rest of the Pentagon’s Hollywood machinery.  In order to steal control of the Goldeneye weapon, Orumov and Onatopp need a prototype helicopter that is resistant to electronic interference.  Luckily one is in dock for a public demonstration in Monte Carlo (where else?), so Arkady and Xenia swing by.  Onatopp screws an admiral to death, suffocating him between her heavenly thighs, while a colleague swipes his ID card.  The two of them then steal the helicopter.

However, in the original script the admiral was American, and Strub didn’t like the idea of an American officer being duped and killed so easily.  So the nationality of the admiral was changed to French, which made more sense, him being in Monte Carlo and all.  However, the helicopter they wanted was a Eurocopter EC665 Tigre belonging to the French navy and they wanted to film aboard the frigate La Fayette.  The French weren’t too happy about their military being represented by a sex-crazed idiot, so the character eventually ended up being Canadian, and to ensure everyone realised he wasn’t American or French the film includes an entirely unnecessary close-up of his ID card.

Exactly why a Canadian admiral would be in the audience for a demonstration of a French naval helicopter in Monte Carlo is not at all clear.  Indeed, it wouldn’t have made much sense for him to be American either.  In fact, why do we even need to know what nationality he is?  Apparently this was important enough to the producers to keep it in and important enough to both the US and French militaries to lean on the producers to change it.  In exchange for this politically-motivated change to the script the US Marine Corps loaned the producers a unit of soldiers and some helicopters for the final rescue scene.

The US Marines rescue Bond and Natalya

For this scene Strub insisted on a minor promotional change to the script – he added a line of dialogue identifying the soldiers as Marines.  Again, does it really matter whose soldiers rescue Bond and Natalya?  Does it matter which country or which branch of that country’s military provided them?  These two small changes effectively reversed the portrait of the US military in Goldeneye, even though they have a cameo role at best.  The only potentially negative aspect – that the duped admiral is American – was changed, while the otherwise anonymous soldiers rescuing our protagonist from Cuba (shot in Puerto Rico) are explicitly identified as US Marines, making the military look good.  This scene, right at the end of the film, leaves the audience with the lasting impression that behind our hero James Bond there are other heroes in American military uniform.

Job done, Strub even wrote the producers a letter thanking them for the changes they had made, saying:

We appreciate your changing the identity of the U.S. admiral to a foreign officer and your including dialogue recognition identifying the Marines.

Of course, the Goldeneye producers didn’t have much choice – they wanted military support to add authenticity and production value to their reboot of the Bond franchise.  While the film could have made without this support, these elements are what helps Goldeneye stand out from the other 1990s action films with pretty much the exact same storyline.  As always the lesson is if you want the Pentagon’s toys then you play by their rules.