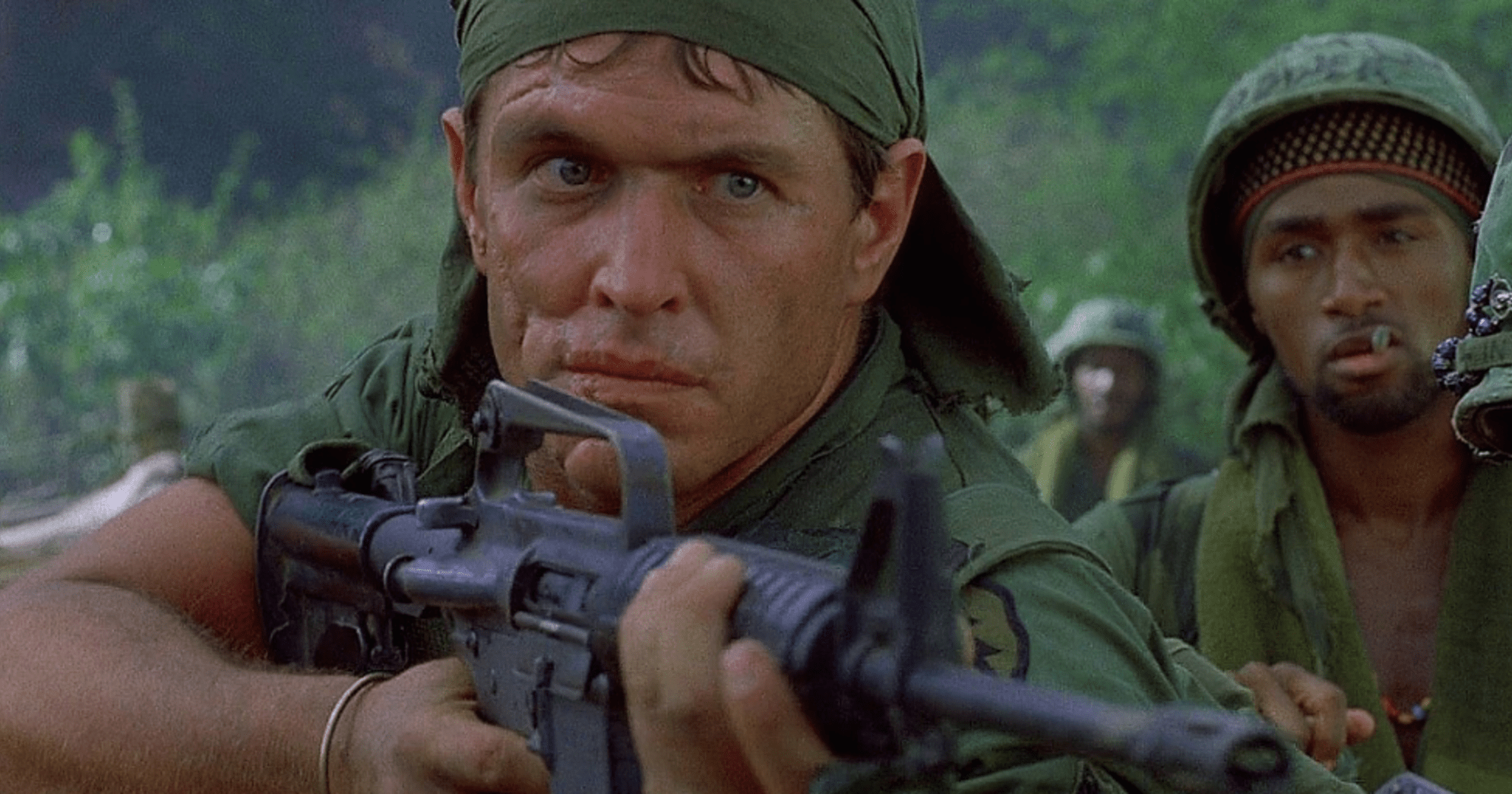 Rape, Murder, Drugs and Racism: Why the Pentagon Rejected Platoon

The Vietnam war drama Platoon was recently inducted into the US Library of Congress’ National Film Registry, in recognition for its status as an important piece of American pop culture.  So far, I haven’t seen a single article on this story that mentions that Platoon was refused support by the US government, let alone the reasons why.  So how come the film is good enough for the Library of Congress, but not good enough for the Pentagon?

A file on Platoon at the Suid archive was recently accessed and copied by Roger Stahl, and it details exactly what happened between the DOD and the film’s producers.  In June 1984 production manager Kitman Ho wrote to Don Baruch with a copy of the script, requesting the Pentagon’s help.

Dear Mr. Baruch:
Enclosed please find a script for “Platoon” by Oliver Stone, whose credits include “The Hand,” “Scarface,” and “Midnight Express,” for which he won an Academy Award. “Platoon” is being produced by Dino Laurentiis who most recently produced, among others, “Ragtime,” “Firestarter,” and “The Bounty.”

As in all Mr. de Laurentiis’ films, historical accuracy is of the utmost importance. We realize the Pentagon’s concerns are our concerns, and we look to your office’s guidance to insure that all references to Army personnel, equipment, procedures, tactical maneuvers, etc., are authentic and correct. It is a prime concern of the film that the Army be portrayed in a light that is just, fair, and accurate.

The director of the film, William Oliver Stone, I should add, served 15 months in Vietnam in 1967—68, in the 25th Infantry and the lst Cavalry Airmobile Division. He was awarded the Purple Heart with Oak Leaf Cluster, and the Bronze Star for heroism in ground combat. This screenplay is based, in part, on his experiences, with added dramatization.

If you should have any questions, please feel free to contact me at the above address or phone number, and thank you in advance for your time and cooperation.

Baruch forward the script to the Chief of the Army’s Policy and Plans Division who almost immediately wrote back saying there was no way they could support Platoon.

We have reviewed the script “The Platoon” and found the Army cannot support it as written. In its present form the script presents an unfair and inaccurate view of the Army.

There are numerous problem areas in the script. They include: the murder and rape of innocent Vietnamese villagers by US soldiers, the cold blooded murder of one US soldier by another, rampant drug abuse, the stereotyping of black soldiers, and the portrayal of the majority of soldiers as illiterate delinquents. The entire script is rife with unrealistic and highly unfavorable depictions of the American soldier.

Because of the unacceptable themes. we have not staffed this script for operational and tactical accuracy.

Despite the script being a semi-autobiographical account of Oliver Stone’s real experiences in Vietnam the US Army and DOD felt that the film was inaccurate and misrepresentative.  Baruch wrote back to Ho, explaining this.

This is in reply to your letter of June 19, 1984, regarding the feature motion picture “Platoon.” You indicated that a prime concern was to portray the Army “in a light that is just, fair and accurate.” After reviewing the screenplay, the Army states ”the entire script is rife with unrealistic and highly unfavorable depictions of the American soldier.” In our opinion, the script basically creates an unbalanced portrayal by stereotyping black soldiers, showing rampant drug abuse, illiteracy, and concentrating action on brutality.

Despite this Baruch responded to Ho’s request for suggestions for a military technical advisor, offering two names of ‘former Army officers who served in Vietnam and also in the Army’s Los Angeles Office of Public Affairs. Both have had considerable experience working with the motion picture companies and giving technical advice.’  Both these men were Vietnam veterans who had worked for the Army’s entertainment liaison office, and thus this is an attempt by the DOD to positively influence the film without giving formal production support.  In the end the producers went with Dale Dye, another Vietnam veteran who worked on several Oliver Stone movies (among many others).

Perhaps more important is the DOD’s claim that the film ‘creates an unbalanced portrayal’, as though ‘balance’ is one of their key PR concerns.  But this word is only ever used to apply to negative or critical portrayals – in the many thousands of pages of documents that I have read I have never come across even one instance of the DOD asking a very positive portrayal (like Top Gun or Pearl Harbor) to write in a few negative moments to make the film more balanced.  If they truly wanted a balanced portrayal, showing both the good and the bad, then this would happen routinely, rather than absolutely fucking never.

The rest of the Platoon file is largely comprised of press cuttings about the film, and even a transcript of an episode of Nightline where Stone was interviewed about the movie.  Clearly, the DOD were worried about the film and were keeping tabs on responses to it from audiences and critics.  One cutting of a UPI story included comments from Vietnam vets criticising Stone for ‘covering up war crimes’, saying he never reported the instances depicted in the film to his superior officers.

Bizarrely, the same story tried to rewrite the entire history of Vietnam, saying that the film’s premise was ‘an outrageous lie’ and claiming that the US soldiers were ‘very honorable men who went to Vietnam to aid a defenseless people who were under siege.’  So Oliver Stone is bad for covering up war crimes, but those war crimes didn’t happen because US soldiers are all very honorable and were bravely protecting a defenceless people?  Which is it?  This article appears to just be throwing shit at the wall and seeing what sticks.

A Pentagon memo records some of the coverage of the film by Time magazine, including:

Bob Duncan, who served in the lst Infantry at the same time Stone was in the 25th, noted: “He managed to take every cliché — ’the baby killer’ and the ‘dope addict’ — that we’ve lived with for the past 20 years and stuck them in the movie about Vietnam.”  Another veteran, Nick Nickelson: “I hope this doesn’t bring back those old depictions. God help us. I don’t want to go back into a closet again.”

In reality, there are dozens of Vietnam war films and many of them had such ‘clichés’ removed by the DOD during script review.  These comments illustrate a mentality among some veterans – that admitting and depicting the war crimes and self-destructions of the Vietnam war was somehow unacceptable or unfair.  Much better to simply suppress uncomfortable truths, rather than deal with them through the therapy of cinema.

Once again, it appears that for those who still had a military mentality, the depiction of war crimes in films is worse than committing those war crimes in the first place.  As I’ve said before, if only they applied the same sensitivity towards committing crimes as they did to showing them in films and TV shows.