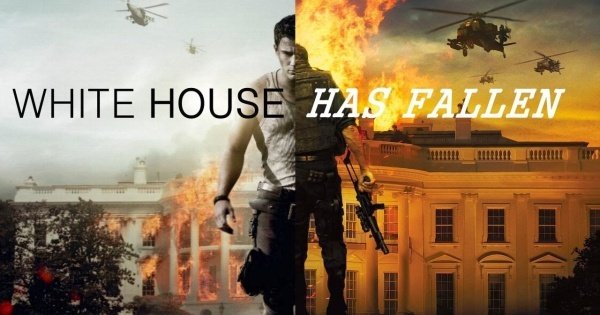 Review: Olympus Has Fallen and White House Down

I recently had the displeasure of watching Olympus Has Fallen, one of a pair of 2013 movies about a terrorist attack on the White House, and a lone hero fighting back like Bruce Willis in Die Hard. Just like when in 1998 the identikit asteroid disaster movies Armageddon and Deep Impact were both released, both White House Down and Olympus Has Fallen were state-assisted productions.

State Sponsorship of White House Down

The case for White House Down is easier to make, because the film appears not on any of the Department of Defense’s film lists, but on a list of productions assisted by the Canadian Armed Forces.  The film’s page on IMDB also credits a ‘political advisor’ named Richard Klein, who has also worked on the Transformers, Bourne and Mission: Impossible film franchises, all of which have involved either the DOD or the CIA, or both.  He also worked on Skyfall.

The film’s own credits also list two technical consultants named Josh Young and Rob Yalden.  Josh Young is a journalist and author and White House Down is so far the only film he has consulted for, whereas Rob Yalden (who is not mentioned on the IMDB page) is a former Secret Service agent.  The credits also note that Klein works for McLarty Associates, a law firm that until 2008 was one half of Kissinger McLarty Associates.  The President of the company Mack McLarty was Chief of Staff to President Bill Clinton and is a member of the Council of the Americas.

While Klein himself is not working for the government, he did work for the State Department during Bill Clinton’s presidency and aside from running McLarty’s media consultancy division he is also the head of their Middle East & North Africa practice.  As he said of himself, ‘I was so not a movie guy.  I didn’t know anything about this business until being thrown into it.’  This is a man from the political world, who worked for the government and then joined the corporate state, and only after that did he get involved in films.  These days, his specialty is in helping filmmakers gain access to difficult locations – Giza in Egypt for Transformers, the Burj Khalifa for Mission: Impossible.  This is exactly the kind of assistance the State Department provided to the makers of The Spy Who Loved Me.

As this article from the New Yorker explains, Klein’s role in the production of White House Down was to ensure that the White House looked accurate before they spent two hours blowing it up.  I guess accuracy is important to filmmakers, right up until it isn’t and they abandon the real world for the sake of drama as in films like all the franchises Klein has worked on.  More recently, Klein wrote a blog for the Washington Post explaining how The Interview ‘really does subvert North Korea’s regime’.

When White House Down premiered Klein was in attendance, as was his boss Mack McLarty, alongside John Podesta (another of Bill Clinton’s Chiefs of Staff and soon to be an advisor to the Hillary Clinton presidential campaign), Bill Clinton’s Press Secretary Mike McCurry and the then head of the Department of Homeland Security Janet Napolitano.

State Sponsorship of Olympus Has Fallen

Making the case for Olympus Has Fallen is slightly more complex, because the credits both on IMDB and at the end of the film list no script consultant or technical adviser of any kind.  However, the film definitely had at least three people fulfilling these roles and their absence from the credits is curious given that the film also had no overt sponsorship from the military.  This may be due to the production’s heavy reliance on CGI and other video effects, and so they didn’t need to rent out military vehicles or need any script advice.  Who needs a storyline supervisor from the DOD when you’re not really bothering with a storyline?

Furthermore, in these days of outsourcing propaganda production to Sony and Showtime, often it is someone who is currently working outside of the government who provides the necessary expertise.  As he explains in the following ‘making of’ featurettes, director of Olympus Has Fallen Antoine Fuqua had at least three such men, and one other who was working for the DOD, helping him on the film.

Though they are only mentioned briefly, the four men are identifiable as Darrell Connerton, Joe Bannon, Ricky Jones and Keith Woulard.  Woulard is a former Navy SEAL who was the stunt co-ordinator for Olympus Has Fallen, a job he has previously done on numerous DOD productions including the Iron Man films, Black Hawk Down, Air Force One and Tears of the Sun.  He is interviewed in one of these featurettes, saying that it was his job to make it all look authentic and that realism is important to Fuqua.  If realism was so important then why is 90% of the action computer-generated?  Clearly adding realism was not Woulard’s primary role on set, so much as adding the appearance of authenticity due to his experience working for the DOD as an elite soldier.

After all, if they wanted to make sure they were getting the actors to look right when running with guns then they could have just watched a few of the hundreds of movies that have overt DOD sponsorship and just copied scenes from them.  That is clearly what they did for quite a lot of this hugely unoriginal film, so Woulard’s role was completely unnecessary.

The other three men are even more curious.  Joe Bannon, the uncredited technical advisor, has worked for numerous branches of the US security services, from the San Francisco police to the DEA and the FBI, as well as being an ‘Air Assault Commando’ for the Department of Justice.  He also worked as a bodyguard protecting the San Francisco mayor, before graduating to work with the Secret Service guarding the likes of Hillary Clinton and the Pope.  He now runs the Bannon Institute of Martial Arts and Executive Security International in Colorado.  Fuqua summed this up by saying he ‘worked for the Secret Service’.

Ricky Jones, who according to Fuqua ‘worked for the government but not Secret Service’ served as a consultant on the film.  According to reports he was Secret Service, but he denied that himself in an interview, saying he was a counter-terrorism expert but that he couldn’t talk about what he did.  Jones played a major role in shaping the film, not just making changes to the script but also being on set constantly while the film was being made.  Gerard Butler who played the Bruce Willis character in Olympus Has Fallen, explained how, ‘Ricky Jones was there every second of the day, so I constantly was going to him and just checking – are my moves right? Am I looking the right way? And by the way he was shot in the stomach and almost bled out, and that was engaging terrorists’.  Presumably this means Jones was either US Special Forces, or an on-the-ground CIA agent.  Butler and Jones even did a live Reddit Q and A session to promote the film.

The final contributor, who along with Jones helped design the attack on the White House that is portrayed in the movie, was Darrel Connerton.  Fuqua simply said ‘He worked for the government (laughs), I’ll leave it at that’.  Once again Connerton is not listed as a consultant on the film but as an actor – playing the head of the CIA.  In fact he worked for the DOD and was still working for them when he consulted for the film, though like Jones he refuses to talk about it.  He is now the executive producer on Fighting Angels.

Fuqua says these men helped him to figure out ‘what he could get away with and what he couldn’t’ and that ‘there were some things like, okay, we’ve got to take this out. We can’t show that’.  Thus, they had as crucial a role in shaping the script and the resulting film.  The fact that Connerton actually appeared in the film while still being employed by the DOD shows that this must have officially sanctioned.

What was the purpose of these two films?


Both of these films used consultants who were either ex-government employees working in the private sector of the corporate state, or were still working for the government.  The fact that both were developed at the same time might be a coincidence, because ‘twin films’ are quite common in the dream factory.  However, the fact that the resulting movies are so very similar is not a coincidence, but is the predictable result of having these sorts of people consult for and shape the films.

While many theories have been proposed for why this scenario of an attack on the White House, rarely seen in fiction, emerged in two films at once, the likely reason is just that Hollywood and other major entertainment exist in a useful symbiosis with the war on terror.  They are the creative thinktank whose job it is to come up with ever more exciting possibilities for terrorist attacks, which compensates for the fact that reality in the West is quite peaceful.  In pursuing radically frightening possibilities they are often assisted by the people and institutions who stand to gain from sustaining the perception of an imminent large-scale threat.

Fuqua said that part of his motive for making Olympus Has Fallen was to make people realise that this could actually happen, that his purpose was to scare people.  Ricky Jones put it more explicitly, saying ‘We hope that everyone who walks away feels very patriotic… With the budget cuts that they’re taking in the military, with the budget cuts in intelligence, with us pushing Israel away, which is our greatest ally on intelligence from that continent, with the home-grown terrorists … with the people coming in here as students that are terrorists … the White House could be attacked at any time… So I think this movie and again it’s just a movie, but I think everybody should … walk away with, ‘Yeah, I’m proud to be an American’.’