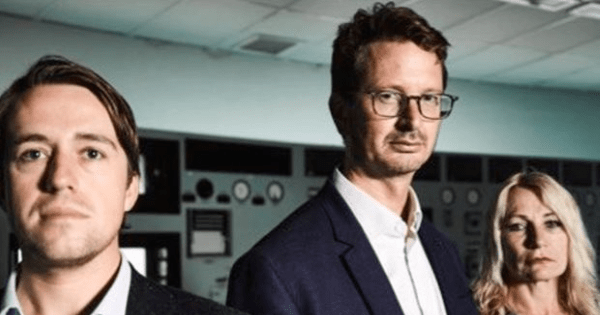 Spies is the ‘new’ game show from Channel 4.  I say ‘new’ because it’s a blow-for-blow remake of the 2004 BBC series Spy, which also took a small group of members of the public and had three former spooks put them through their paces via a series of tests and training exercises.  The first episode of Spies contained one variation from the BBC’s version – one of the contestants is a mole, part of the team called ‘control’ who are ostensibly running the training course.

The spies behind Spies

In the original series the three ‘experts’ who presented the tasks and made assessments on the eight contestants were Sandy Williams (British intelligence officer, service unknown), Harry Ferguson (MI6) and Mike Baker (CIA).  Baker also worked on the BBC drama Spooks along with other former spies.  This briefly included David Shayler and likely included Williams and Ferguson given the two series were developed at the exact same time and in places even resemble one another visually.  The surveillance sequences in Spooks are shot and edited in an almost identical way to the surveillance exercises in Spy, and Spies follows suit.

The first of our three new spy experts is Cameron Colquhoun, a former analyst at GCHQ who now runs – gasp – a private intelligence company, called Neon Century.  His bio says ‘Colquhoun spent almost a decade running cyber and counter-terrorism operations in British Intelligence agencies, working closely with Whitehall and was deployed with UK special forces in the Middle East.’  Cameron was the mole in this first episode, drawing on essentially none of his experience as a GCHQ analyst because that doesn’t really involve being undercover.  But never mind that now.  He tells us that one of the hardest things about being a spy is that, ‘You can’t tell anyone how you saved the world, you stopped a terrorist attack, you stopped a war’.  Given the sorts of things British Special Forces have got up to in the Middle East in recent times (including posing as terrorists and causing a riot in Basra) I doubt that our Cameron has ever stopped a war. He also speaks in the intro of how to join the intelligence services you have to ‘thrive on risk’ before contradicting this adrenaline junkie egotism and saying he wants to do a job ‘for the greater good, that’s not about money’.  Just in case you are really thick and don’t get what he’s talking about we are shown Cameron in sunglasses talking on a mobile phone, intercut with shots of a busy Middle Eastern marketplace.  Then comes the unavoidable kicker – the red London bus, to remind you of the 7/7 London bombings. Just in case you’re really thick I’ll explain it – it’s the Muslims in the Middle Eastern marketplaces who are blowing up the buses which is why this nice young man who wants to do something good for society went to the Middle East with some Special Forces soldiers.  That’s what they want you to think.  This has absolutely fuck all to do with the gameshow, which isn’t set in the Middle East and doesn’t involve terrorists.  Presumably this is the crap you have to include if you’re making a TV show about spies because otherwise MI5/MI6/GCHQ won’t give clearance for their ex-employers to take part.  And just in case you’re still really thick – IT’S THE FUCKING MUSLIMS, INNIT!!!!!!

Our second former spy expert is Julian Fisher.  He was an intelligence officer who worked ‘in a specialised branch of the British Diplomatic Service’ for MI6, largely in Africa.  Julian now runs Your Mission, a company that offers the chance to spend £25,000 to spend two months pretending to live as a spy in London and taking part in staged ‘spy’ experiences.

For two months, live a parallel life, mirroring that of an international spy. This bespoke game for two people allows the subjects to go about their every day lives unaffected, with covert espionage engagement roughly every week

Develop traditional espionage skills, including tradecraft, agent recruitment, and the use of covert communications

Experience a real-time surveillance operation, as well as the use of disguise in an operational scenario

As the adventure unfolds, every action you make will dictate the next turn, the conclusion of which will lead to an overnight stay in one of Europe’s historic spy capitals

When Your Mission is complete, you will receive a visual record documenting your time as a spy

So if you failed to get on Spy back in 2004 or Spies in 2016 and you’ve got a spare 25 grand you can still enjoy this mindfuckingly stupid experience.   Julian also works for AAA – All Africa Advisors, who describe themselves thus:

We are dedicated to providing comprehensive commercial services for African businesses and those looking to enter African markets, as well as working directly with national governments, the African Union, the private sector, and local agencies on sustainable development solutions across Africa. Our perspective is totally pan-African and we have experience across all major commercial sectors, enabling us to provide clients with comprehensive strategic advisory services.

Our third host/abuser-in-chief of the general public is ‘Debbie’ (full name not provided and none of these people are mentioned in the credits) who spent 25 years in MI5.  Debbie talks like she’s some mafia queen wannabe in an Eastenders Christmas special and says really idiotic things that are supposed to illustrate her no-nonsense approach, including, ‘You’re not a superhero – there is nothing to protect you other than your own skills’.  Yeah, you’re alone with just your wits and your skills.  And several multi-billion pound intelligence services as backup.  And a few dozen multi-billion pound intelligence services run by allies with enormous physical reach and technical sophistication.  But forget all that, because she talks like Frank Butcher so she must be the real deal.

Without recapping the entire first episode basically there are 15 people plus the mole and they put them through a rudimentary surveillance exercise (which everyone fails) and then told to prepare a cover story so they can mingle at a cybersecurity conference, as though that’s a likely scenario for a real spy.  This is all intercut with lots of our three ex-spooks doing talking head pieces to camera talking about working for the security services so you know you’re getting some authentic shit.  In particular Julian comes across like a typical button-down British sociopath, with the unnerving smirk of a serial killer.

While most of the contestants get very little screen time we follow the story of the most attractive and young blonde woman, Lisa, a social worker with a psychology degree.  They build up Lisa to be lacking in confidence and she frets about trying to develop a plausible-sounding cover story in time for the conference.  Then, out of the blue, during the conference she is unexpectedly invited up onto the stage – alongside Cameron the mole – to talk about cybersecurity.  She handles it relatively well, thus providing some kind of emotional payoff for people who buy into these predictable and thinly-constructed weekly narratives that reality TV shows ‘just happen’ to record and broadcast.

Yeah, if you believe that then you really will believe anything.  Lisa is clearly the totty of Spies, and along with former Navy recruit Matt will be the focus of the series going forward.  As one watcher put it:

Typically the young blonde social worker (Lucy?) is shown in bed after a nights sleep still with perfect makeup and not a hair out of place, plus holding her cuddly toy ‘comforter’. She will go far.

Ultimately they have to eliminate some of the contestants each week so they got rid of two of the less attractive middle-aged women who we’d barely learned anything about.  Which is deeply ironic given that in real life the British intelligence agencies are actively trying to recruit middle-aged mothers.  So, for all the attempts Spies makes to provide an air of authenticity they still have to conform to the expectations of their audience so they focused on a 26 year old guy and a 27 year old woman and, aside from briefly featuring the token Muslim-looking guy, everyone else was sidelined.

One disappointment is that at the end of the episode they reveal that Cameron is the mole, and he goes over to join the three-person ‘control’ team with Debbie and Julian.  Given that this is the one element that is different to 2004’s Spy I felt they might have kept him in place for longer and this could have provided something interesting in this otherwise predictable piece of pro-government twaddle.  However, in episode 2 we’ve been promised:

An episode that explores the moral ambiguity of espionage work, the trainees enter a world of mistrust and paranoia as Control direct some of them to work against their colleagues as informers.

So I guess I’ll be reviewing that in the next few days.  Needless to say this is a very bad piece of TV and I’m not recommending it at all.  Spy was better.