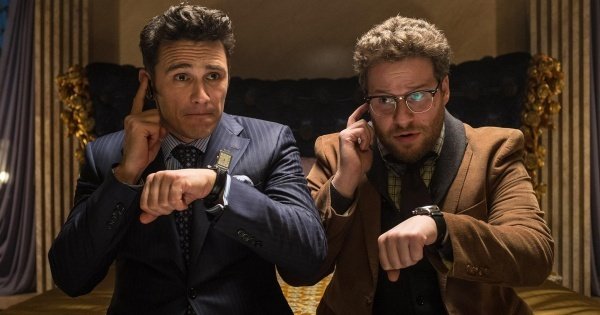 The last several weeks have been among the most interesting in recent Hollywood history.  Never before have we see the President, the FBI and George Clooney speaking with one voice, expressing deeply felt concern about a third-rate comedy set in a third-world failed state (note: filmed on location in Canada).  Now that the dust has settled and The Interview has been released and this has not resulted in World War 3 we can go back to treating it like a movie, rather than a zombie plague or sacred text.

Rewind only a couple of weeks and the film was withdrawn from release in the wake of the biggest corporate hack in US history, before a complete U-turn saw it put out in independent cinemas and via online streaming services. The objections that led to the movie being ‘banned’ in the first place weren’t that it was smug and arrogant for multi-millionaire Hollywood oiks to make a comedy about people starving to death because their government is run by a religious cult, but that it featured the assassination of a person who in reality eminently deserves to be assassinated.  Though preferably not by Seth Rogen and James Franco.

In February 2013 the Vice media company gained access to North Korea – usually out of bounds for US media – by appealing to Kim Jong-un’s fascinating with the Chicago Bulls.  Former Bulls star Dennis Rodman and several members of the Harlem Globetrotters were flown out to Korea for an exhibition match.  Before the game started, Rodman sang happy birthday to the ‘Great Leader’:

Rodman played in the first quarter of the game, and then reportedly spent the rest of it sitting with Kim smoking cigars.  When he returned from the trip he spoke to the FBI about his conversations with the North Korean leader and since then has returned to the country at least six times.  This then inspired a movie treatment provisionally titled Diplomats that was greenlit by Fox in February 2014 but appears to have been scrapped due to competition from The Interview.

Meanwhile, Kim Jong-un has lived up to his father’s reputation for outright incompetence, psychotic priorities and authentic batshit craziness.  The world’s worst leader has continued his country’s nuclear program – North Korea have now detonated four nuclear devices in underground tests – and regularly declares war in a manner befitting the government he inherited.  He is, if anything, more overtly hostile towards the US than his father.  The White House responds in like fashion.

Into this febrile mix came The Interview, which Kim publicly complained about (and threatened to declare war over) starting in summer 2014, months ahead of its release.  Then came the Sony Pictures hack, discovered in late November 2014 though it had probably been going on for a year by that point.  Gigabytes of data, among them copies of several unreleased films including The Interview, were leaked onto torrent websites and the story began to gain traction.  Eventually the government, after ignoring the question for a couple of weeks, suddenly decided it really mattered quite a lot after all and declared that the North Korean government were responsible.

The furor around The Interview, along with concerns expressed by cinema theatre chains led to Sony withdrawing The Interview from release, a decision that drew a lot of vocal criticism including from Barack Obama.  The strangeness of a President sticking his nose into Hollywood business so much is one of numerous elements of this story covered in a conversation between Guillermo Jimenez and myself for his Demanufacturing Consent show on BFP (full episode only available to subscribers).  We recorded that talk in the brief period that the film was withdrawn from release.  It is now out and is doing very well, having made over $30 million via digital services.  It is likely that all the bluster and bullshit around the hack and the political controversy has added to the marketability of an otherwise quite average, ‘bleh’ type film.  And of course, that was probably the point of the hack all along.

Was The Interview made with the CIA?

The question of whether the CIA had a hand in the making of The Interview, and possibly in the hacking scandal that create a huge hype around it has occurred to many people.  Some have thrown in their chips and place their bet on yes.  Certainly the State Department were consulted and were enthusiastic about the film.  Much has been made of actor-writer-producer Seth Rogen’s comment to the NY Times:

There was a period during September and October when Kim Jong-un wasn’t seen in public. Were you concerned this could affect the movie?

ROGEN It was a weird position to be in, where you were concerned for Kim Jong-un’s safety, for your own financial well-being. [Laughter] Throughout this process, we made relationships with certain people who work in the government as consultants, who I’m convinced are in the C.I.A. After he had been gone for like a week, I emailed a guy, and was like, “What’s the deal?” The response I got was: “He’s having ankle surgery. He’ll be back in a couple weeks.” And then two weeks later, it’s like: He had ankle surgery; he was back.

However, no script consultants or technical advisers of any kind are listed in the credits for the film.  This is not unusual, the 2000 comedy Meet the Parents had two CIA technical advisers – Milt Bearden, who is listed, and Chase Brandon, who isn’t.  Bearden’s services were no longer required when they made the sequel Meet the Fockers, but Brandon remained involved, again without being credited.  Compare Chase Brandon’s official TV/filmography with this more detailed one available on a page on his personal site that you can only get to via search engines, not via his homepage.  He was involved a lot more productions, and in a more pronounced and influential way, than the official credits would have you believe.  But you’d only find his site if you knew his name, and with so few official credits, who would know his name?

So, this mystery of who were the consultants on The Interview and whether they were CIA will likely remain unsolved, but there is precedent for this sort of thing, as well as the more overt, credited assistance that is somewhat more commonly discussed.  The film itself – a story about the relationship between the CIA and the entertainment industry – is a stoner dropout version of Argo, which had CIA support up the Yinyang.  There is even the signature establishing shot of Langley that you are only allowed to use with the CIA’s permission:

The shot is the exact same type used in Homeland: Though Mission: Impossible was given access to shoot their own aerial footage: And Ben Affleck’s staring competition with himself was allowed to do a bit of their own filming:

However, in The Interview there is no shot of the CIA seal (unlike The Recruit, In The Company of Spies and so on) and the logo used in the background for the ‘inside CIA’ sequences is not quite the official logo:

The eagle is facing the wrong way in The Interview, and the white shield has curved sides instead of straight ones, and there are other small differences.  The question is why?  Why were they allowed to use footage of the real CIA headquarters, which due to security concerns you have to obtain via the CIA and can only use a very brief shot, but ‘not allowed’ to use the real CIA logo which is not a security concern and which I downloaded via google images?  Rogen’s comments about CIA consultants have no corroboration in the film’s credits, and the signature shot of Langley alongside an obviously altered CIA logo provide hints of CIA involvement in the film, but also provide them with plausible deniability.  Which is ‘ironically’ what the CIA character is talking about in the scene where the dodgy CIA logo can be seen.

The Interview is a relatively mundane comedy, with a similar blend of quippy dialogue and slapstick action as Meet the Parents and Meet the Fockers.  I found James Franco to be mostly very irritating, and as with many comic films after it passes the ‘end of the sitcom episode’ timeframe it loses momentum.  Aside from one recurring gag about ‘honeydicking’ (the male equivalent of a honeytrap) the jokes come thick and fast but are the same basic material Will Ferrell and the rest have been recycling for over a decade.  There are slightly more sequences than usual of men either forcing or having things forced up their asses, with ‘hilarious’ results.

Spoiler: Kim gets it in the end and there’s a revolution in North Korea.  Just like when the CIA changed the ending of Animal Farm in their 1950s film adaptation so there is a second revolution to overthrow the corrupted first revolution.  Indeed, the way in which revolution in North Korea (in some ways a desirable thing) is portrayed in such a positive manner, even when it rapidly descends into civil war, is quite worrying.

Spoiler: The two would-be assassins are recruited by the CIA because they run a TV show that Kim loves and so he agrees to a rare interview, just like with the Vice/Dennis Rodman project in real life.  They are given disposable ricin strips that they use to try to poison Kim while shaking his head.  In real life ricin cannot kill someone through skin contact, it is only by ingesting or injecting it that it is lethal.  Of course, ricin was considered dangerous enough for Colin Powell to make the non-existent British ‘ricin plot’ a centrepiece of his notorious address to the UN, so it is no surprise to see the same myth turn up a decade later in a film bearing the hallmarks of the same agency that gave Powell his information.

All in all, this is an unexceptional movie made exceptional only by the context of its release and the possible involvement of the CIA in its production.  A movie that passed no thresholds in its content, except for portraying the assassination of Kim Jong-un, but passed many in its marketing and its impact.  Indeed, the film itself is rather irrelevant and does not in any way demand to be watched, because the story around it is far more interesting.