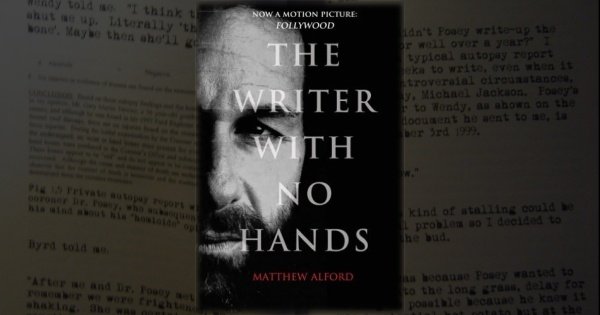 Review: The Writer With No Hands

In June 1997 Hollywood screenwriter Gary Devore disappeared while driving home through the middle of the Mojave desert.  Devore had connections to the Pentagon and CIA and was working on a screenplay that threatened to reveal devastating truths about the 1989 US invasion of Panama.  His disappearance left no trace – of him, of his car, of his work.  Just over a year later his car was found at the bottom of an aqueduct with what appeared to be Devore’s body inside, but his hands were missing.  This possible murder mystery, complete with freakish details, caught the attention of British academic Matt Alford, who devoted several years to investigating Devore’s disappearance.  The Writer With No Hands is the result of that investigation, though it almost certainly isn’t what you’re expecting.

Devore lived a one-of-a-kind life.  He liked beautiful women, drugs, cowboys and Hollywood.  Among his screenplays were the adaptation of occasional MI6 agent Frederick Forsyth’s The Dogs of War and Raw Deal, a vehicle for future California governor Arnold Schwarzenegger.  Devore also wrote and produced Traxx, possibly one of the greatest of all 1980s low-budget macho action comedies.  While never a superstar writer, Devore certainly couldn’t be considered small time.

By the mid-90s Gary had developed a screenplay about the invasion of Panama that he had persuaded a studio to greenlight.  Devore was to write, direct and produce a film that posed a rare threat to the establishment, which his wife described as ‘the most hard hitting script’ that they had ever seen.  On the night of June 28th 1997 he was driving home having been away in Santa Fe working on his script when – if the official story is to be believed – he turned his headlights off, drove the wrong way down a motorway for a couple of miles, went through a small gap between two concrete barriers without even so much as a minor scrape on the car and crashed down into the aqueduct. The accident theory, brought to you by CGI

For some reason an initial search of the aqueduct didn’t find the car, and when it was found over a year later Devore’s laptop was missing and the body’s hands had been cut clean off without any sign of how this could have happened.  As far as accidents go, this was about as bizarre and unbelievable as they can possibly get. Unsurprisingly, Matt Alford did not buy this story.  From 2008, Alford spent years accumulating all the news coverage, documentaries, FBI reports and other files and sources that he could in the hope of piecing together what had really happened.  Wendy Devore reported how agents from the CIA, DOD, NSA and FBI, including Chase Brandon, were crawling all over the case in the initial days.  Devore was also the best man at the wedding of Tommy Lee Jones – Brandon’s cousin.  As Wendy herself continued to dig she discovered that Devore had spent time in Panama with the CIA, seemingly confirming that Devore was in a position to know some dirty secrets that could have got him killed.

Gary’s missing hands provided one of the strangest and most tantalising possibilities.  No hands were found in the car, making it all but completely impossible that they were amputated as a result of the crash.  A few hand bones were found, but in the opinion of the coroner they not only weren’t Gary’s, they were in fact over 200 years old.  Was this a warning to other screenwriters who might consider using their hands (their writing talent) to threaten the state?  The phrase ‘hallmarks of a ritualistic murder’ springs to mind.

The investigation was several years old, and somewhat cold, by the time Matt Alford picked up the scent.  This led him not only to Wendy Devore but also to a string of other people who had looked into what had happened to Gary.  Michael Sands, Devore’s agent, was one.  Local PI Don Crutchfield was another.  As time went on Alford built up an impressive library of source material and list of contacts, but this proved inadequate.  Many of the key questions still remained unanswered even after lengthy conversations and correspondence with people on the ground in California.

During his investigation Alford met film-maker Will Westaway and they initially discussed making a series of short youtube videos about the government involvement in the entertainment industry.  However, once Will discovered Matt’s obsessive research into the Devore case any notion of youtube videos was forgotten.  Eventually, and at Wendy Devore’s invitation, the two of them took the plunge.  Emptying Alford’s bank account in the process, they flew out to Los Angeles in search of answers.

They interviewed Wendy, Michael Sands, Crutchfield and a bunch of others who had various explanations and theories for what had happened to Gary, and why.  The stories varied as widely and wildly as the people did, and aside from Wendy herself only one – a former White House official with an ‘above top secret’ clearance – comes across as remotely trustworthy.  Ultimately, Matt left Los Angeles with no firm answers.

Back in England, after another roundabout conversation with Michael Sands and with Matt struggling to see where else he can go with the investigation, news comes in that Sands has died in absurd circumstances.  He walked into a supermarket, up to the deli counter, ate a little meat sample then dropped dead.  As Kurt Vonnegut says, so it goes.  I have both read Matt’s book and seen a preview cut of Will and Matt’s film Follywood and in both this moment is critical, not just for Matt’s investigation, or for his increasingly fractured relationship with Will.  For the ardent conspiracy theorist the death of a critical source would demand an investigation in itself.  For the rationalist it provides a moment to step back and ask whether the death is what is suspicious, or it is simply the context that would make any unusual death seem suspicious.

The Writer With No Hands

The Writer With No Hands tells this story, of a very serious investigation into what was potentially an arm of the secret state assassinating or otherwise disappearing a Hollywood screenwriter due to the explosive nature of his creative work.  But it is much, much more than that.  For one thing it is an extremely funny book, as somehow Alford manages to see the funny side of disrupting his career to spend years investigating an unsolvable mystery, while his marriage falls apart and his house gets flooded.  It is the comic journal of a very serious investigation conducted during an extremely trying time in someone’s life.

But it is more than that.  It is a cautionary tale about the whole realm of what are disparagingly called ‘amateur detectives’ and ‘conspiracy theories’.  Conspiracies are real, in some instances provable beyond any reasonable doubt (yet curiously lacking in prosecutions, for the most part).  However, the conjunction of historical precedent and many suspicious details does not in itself prove foul play, and there will always be people who seize on suspicious events for profit, attention or emotional power over others.  The intellectual Matt of The Writer With No Hands realised both of these things before he even got started with Gary Devore, but the passionate human being Matt learned both of these in quite a hard way.  This book contains a profound lesson for those who might go down this or similar roads.

And yet, it is still more than that.  It is an existential rites of passage story with Biblical undertones.  Two bearded men – Gary and Matt – go into the desert, and neither comes back as the same man.  Gary is either dead or has disappeared without explanation – most likely the former, in my opinion.  Matt is no longer the slightly boyish intellectual he is at the beginning of both the book and film, by the end he has emerged like the butterfly, blossoming in a brightly coloured costume (quite literally, and it’s amazing both in print and in film).  The details of this transformation are sometimes painful to read, this is a book where its personal weight for like-minded readers and fellow travellers is often greater than its political weight, despite the obvious implication that the CIA whacked a Hollywood screenwriter. Despite all these heavy topics that will undoubtedly give any reader pause for thought, The Writer With No Hands is very light to read.  The story does not necessarily lend itself to comedy but somehow, in spite or perhaps because of his travails, the author manages to inject reams of satire and mockery, of himself as much as anything, which prevents the reader from ever lapsing into despair.  I have quite literally never read a book about this sort of topic that does this.  Almost all of them revel in paranoid depression and those that don’t (such as my own) still lack the sheer humanity that Alford has managed to commit to the page.  This is one of the best murder mysteries you’ve ever heard of, one of the best spy stories you’ll never hear about elsewhere, and an extremely touching and funny tale of human struggle.

The Writer With No Hands is available in paperback, kindle and pocket editions.