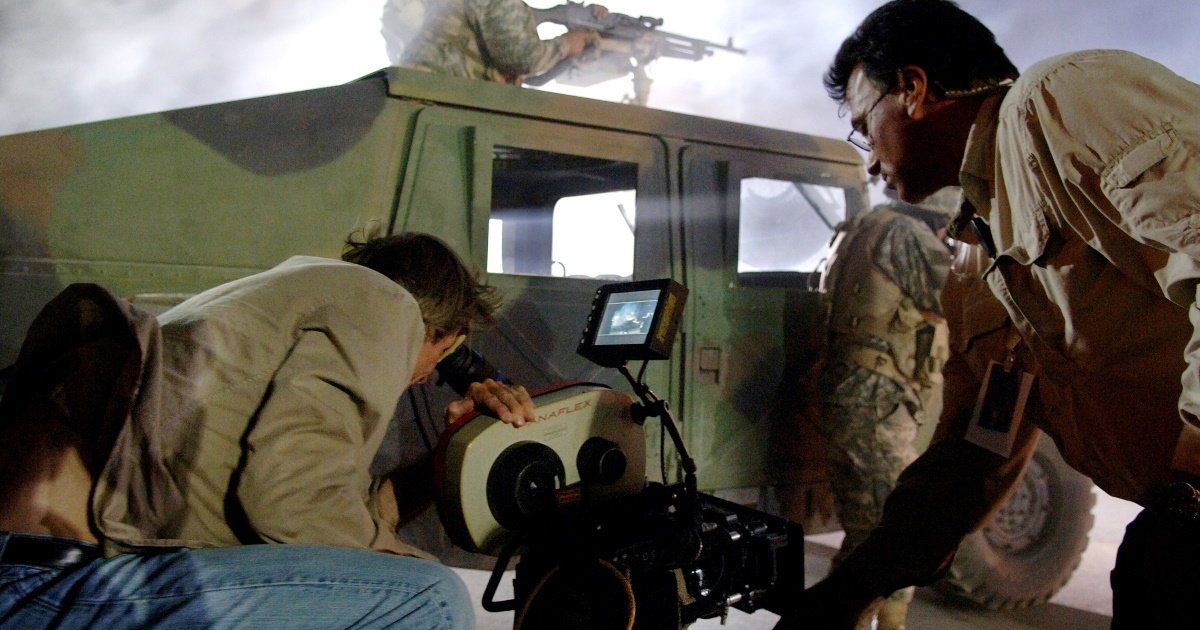 The role of the technical advisor is crucial to understanding the military-Hollywood relationship, but very few people know who these people are or what they do.  Even less well known is that a significant number of private industry technical advisors used to work for the Pentagon’s entertainment liaison offices, and are effectively continuing that work even after leaving the military.

Roger Stahl pointed me to an interesting fact – the main producer for the as-yet-unmade film Raven Four-Two is F. Lee Reynolds, a former Army entertainment liaison officer, though Reynolds is much more than that.  A brochure about the film that was included as part of the released documents details how in 2002 he was Chief of Media Operations and Senior Spokesman for the detention program in Guantanamo Bay, he spent three years in the Army’s Hollywood office and another two in Army Public Affairs, and spent a year in charge of the Armed Forces Network – Iraq in Baghdad in 2009-2010.  While his IMDB bio says he is a combat veteran, it appears his entire deployment to Iraq consisted of PR and propaganda work.

His LinkedIn profile yields some more details.  He served in the Army’s Field Artillery from 1987-1999 before becoming an Entertainment Coordinator for the NY Mets.  Simultaneously he worked for Army Public Affairs from 1999-2006, including a stint in the entertainment liaison office from 2004-6.  He then went into the Army Reserve until 2011, including his time in Baghdad, but at the same time he was a Supervisor of Entertainment Operations for Universal Studios, Hollywood.

So he was working for the military’s entertainment propaganda arm while also working in the entertainment industry – an obvious conflict of interests, but not especially unusual.  He then went back to Army Public Affairs and was Deputy Chief of Special Programs before becoming a Senior Manager for the Studio Tour at Universal Studios, while also acting as an Historian as the US Army’s Center of Military History.  One wonders how he found the time.

While doing all of this he also tried to get Raven Four-Two off the ground – the Army entertainment liaison office reports from 2014 show that he approached the Army’s Hollywood office about supporting the film.  This perhaps explains why the released documents do not include any script notes or other signs of script input on Raven Four-Two, because as a former liaison officer himself Reynolds was perfectly placed to shape the script to the military’s liking before even submitting it for review.

Another similar figure is Matt Morgan, a Marine Corps infantry officer who went to work for their Hollywood office in the late 90s.  He was the DOD Project Officer on Rules of Engagement, The Sum of All Fears and Windtalkers – all of which were rewritten at the DOD’s behest before support was approved.  The Project Officer is a military-appointed on-set technical advisor whose responsibilities include ensuring that the agreed-upon script is adhered to during shooting.  Morgan’s name also appears on the script for Hulk – it appears he reviewed it for the Marine Corps and likely drew up the list of requested changes for that film too. Since leaving the Marines Morgan has become a private industry military technical advisor, working on films including Godzilla, American Sniper and Batfleck vs Superman: Dawn of Tedium.  Curiously, though he has written about the role of the technical advisor and their limited influence on military accuracy in movies, he never mentioned his time working for the Marines’ Hollywood PR machine.

Morgan and Reynolds took their lead from the legendary John Horton – who spent decades in Hollywood working as a liaison between film-makers and the government.  His very limited IMDB credits don’t tell the whole story, but they include several DOD-supported productions such as Star Trek IV: The Voyage Home, Top Gun, A Few Good Men and The Hunt for Red October.  Files from the Suid and other archives repeatedly include Horton’s name as a negotiator hired by film-makers who discussed scripts with the Pentagon in order to make them palatable to their propaganda objectives.  Other credits include MacArthur, the Airport movies and Clear and Present Danger.

Horton was a WW2 veteran having served in Northern Italy (he was even awarded a Bronze Star) but like Morgan and Reynolds he also worked in the military’s Hollywood office.  In 1948 he was recalled to active duty and became chief of motion pictures for the Army, working under Don Baruch’s office. He later worked for Baruch as his head of Industrial Cooperation, working with Motion Picture Companies, as this organisational chart from Baruch’s office shows: As such, when he first carved out his role in Hollywood he was already deeply familiar with the military’s demands and expectations of film-makers, and was almost uniquely qualified to take on such a role.  The only other person I know of who was working in a private Hollywood-government liaison job at this time was Charles Russhon – the long-time advisor and consultant to the Bond movies, an Air Force veteran and possible former CIA officer.

A similar figure to Horton is Lt Col Curtis Hill, USMC (Ret.), who spent much of his career in military PR and communications.  His website explains:

Curtis enlisted in the Marine Corps immediately after graduating from high school in 1986 and was commissioned as an officer in 1990 upon graduation from Penn State University. He served a little more than 32 years in the Marine Corps, retiring from active service in 2018 at the rank of Lieutenant Colonel. Curtis served as an infantry rifleman, an artillery officer, a forward air controller/naval gunfire spotter in a Special Operations unit, and served his last 18 years in the public affairs/ComStrat field (four of which were as the director of the Marine Corps Motion Picture and Television Liaison Office in Hollywood, CA).

Among his credits from his time running the USMC Hollywood office are all three NCIS series, America’s Most Wanted, American Ninja Warrior, Oprah’s Favorite Things, GunnyTime with R. Lee Ermey and films such as Godzilla and Whiskey Tango Foxtrot. He now offers the same service that Horton provided for decades – a liaison between film-makers and the government, helping them win approval from the DOD and other agencies.  For example, his site says one of the roles of the private military technical advisor is to weigh in on behalf of the film-maker on DOD-supported productions:

Although not required when working with the DoD, there is a benefit to having your own military technical advisor on-set to provide immediate assistance in the case of a disagreement between the production and the DoD Project Officer.

However, I’ve never actually heard of this happening, and the emails on The Long Road Home actually say the opposite is the case, that the private industry advisor helps the military get their message through to the director.

One final organisation I’d like to draw your attention to is Musa, a military-entertainment consulting firm.  It is run by Brian Chung and Greg Bishop, two military veterans with extensive Hollywood experience.  Chung’s profile reads:

In 2009, Brian began his foray into the entertainment industry when he was assigned to consult on projects such as TRANSFORMERS: REVENGE OF THE FALLEN, BATTLE: LOS ANGELES, ARMY WIVES, and EA’s MEDAL OF HONOR (2010) as part of the United States Army Entertainment Office.

Bishop likewise worked for the Army’s office, sometimes alongside Chung:

Prior to joining Musa, Greg served in various marketing, advertising and public relations positions in the U.S. Army. He has provided Army brand creative expertise in advertising campaings and strategy for several agencies including Leo Burnett, McCann Erikson and DraftFCB. He also provided brand integration to blockbuster films like TRANSFORMERS: REVENGE OF THE FALLEN and GI JOE: RISE OF COBRA, television programs such as ARMY WIVES, and video games including MEDAL OF HONOR.

Trevor Scott was interviewed by Military.com earlier this year about working for Musa, and how military veterans can break into the creative industries.  Curiously, he said:

There will be things that happen that you had no control over, and [you’ll have to] be prepared to take the blame for it from all your military buddies. There was a scene on Enlisted where Keith David, who played the SGM, was given an ACU top with the Ranger tab on the wrong side. I was working with some of the other actors at the time and wasn’t there to catch it. Of all the millions of little things I fixed on that show, I still get my friends asking why I let him go on screen with his Ranger tab on the wrong side. You just have to make sure that all of the big things are right and that the military is being represented in a fair way, then get as many of the small details right as possible, and finally, accept that there will be a few things that slip through the cracks that all of your military friends will definitely notice and never let you live down. Regardless, it will be fun, and hopefully you’ll make some money.

On paper, private tech advisors are there to ensure uniforms and dialogue are accurate, that the actors run and aim their weapons in a realistic way and other such technical details.  While there are many non-military technical advisors (scientists, ex-cops and so on) I’ve never heard them say that part of their job is to ensure that an institution is represented ‘in a fair way’ i.e. in a positive light.  They are concerned with accuracy, not positive PR, but the revolving door between Hollywood and the Pentagon ensures a much closer relationship.  Particularly for those who have worked in military PR, the need to ensure a positive depiction of their former employers is hard to shake off.

This helps explain why it is that so many non-DOD supported productions have the same values and ideological positions as films and TV shows that received Pentagon approval – they hired veterans of the entertainment liaison machine to help them develop their scripts and for on-set consultancy during production.  While there are other reasons for this consistency across the whole genre of national security cinema, the role of the technical advisor should not be underestimated.