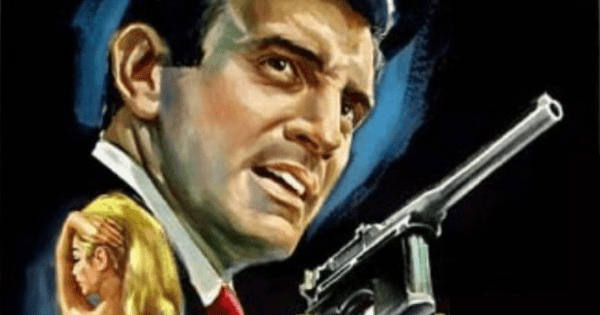 The Second Best Secret Agent in the Whole Wide World

The movie began life as Licensed to Kill, a low-budget British comedy directed by Lindsay Shonteff and written by Shonteff and former RAF Intelligence officer Howard Griffiths.  While it isn’t the most subtle pastiche of Bond it is light, entertaining and quite imaginative so it is no surprise it was picked up by producer Joseph E Levine for US and worldwide distribution.  Levine specialised in taking foreign features and marketing them to the American film-going audience.  He is perhaps most famous for being the man who brought Godzilla to the US.  Levine re-edited the movie to include the opening scene where a woman with a pram and two babies assassinates someone with a machine gun in the middle of an idyllic park.

Levine also recognised that the Bond films were iconic because of their theme songs, so he commissioned Sammy Cahn and Jimmy Van Heusen to write such a tune for Sammy Davis, Jr. to perform.  The lyrics include lines like ‘he’s every bit as good as whathisname’ and ‘not the 10th, 9th, 8th, 7th, 6th, 5th, 4th, 3rd, 1st when the challenge is hurled, but the second best secret agent in the whole wide world’.

The Second Best Secret Agent features a Swedish scientist who is in London trying to set his ‘reverse gravity’ technology when his partner is murdered by the pram-wielding psycho-mother.  He goes to the British government to ask for protection, requesting that James Bond be put on the case.  When Bond isn’t available he gets Charles Vine – the second best that the government has to offer.  Vine then spends the rest of the film protecting the Swede against sinister forces who are trying to kill him, while trying to pick up women.  Yeah, I did say it wasn’t the most subtle film you’ll ever watch.

Why were the CIA into The Second Best Secret Agent?

When Hitchcock’s North by Northwest broke the cinematic silence on the Agency and mentioned the CIA by name this started something of a landrush in American movies about espionage.  The James Bond films were the first to feature a CIA character – Felix Leiter – beginning with Dr No (1962), but Charade (1963), Operation C.I.A. and Blindfold (both 1965) all included dialogue referring directly to the Agency.  It seems that this is when the CIA started monitoring media coverage of spy fiction, especially films, because the CREST database contains dozens if not hundreds of articles on spy films of the 60s and 70s.

While the CIA did not exercise as much influence over Hollywood at that time as they do now, it is clear that they recognised the importance of spy films in creating a public image of the Agency.  CREST includes two reviews of The Second Best Secret Agent, one from the Baltimore Sun which is very positive and one from the New York Times which is quite negative.

“The Second Best Secret Agent in the Whole Wide World” is twice as bloody, bawdy and bizarre as the average Bond movie and about ten times funnier.

Their casual hero in this rankly imitative James Bond film is a cheap amateur alongside Mr Bond or Harry Palmer or our own man Flint, and the picture itself is a very small cup of very tepid melodramatic tea.

But here is the question – why did the CIA care about this film?  It doesn’t mention the CIA or feature an American spy character.  The only answer I can think of is that it was a James Bond spoof, and the CIA were somewhat invested in the Bond character and brand.  The Charles Vine character proved enduring enough for two sequels – Where the Bullets Fly (1966) and Somebody’s Stolen Our Russian Spy (1969).