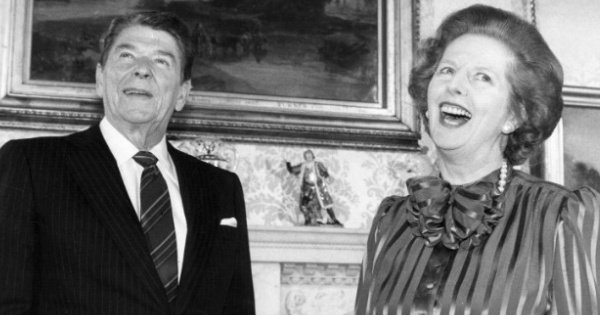 Shortly before the UK general election of June 1983 the Thatchergate scandal broke when a tape recording and an anonymous letter were sent to several Dutch newspapers.  The recording was purportedly a phone conversation between then UK Prime Minister Margaret Thatcher and then US President Ronald Reagan.  The conversation included numerous incriminating details, including that Thatcher had personally ordered the attack on the Belgrano during the Falklands war, even as it had left and was moving further away from the ‘exclusion zone’.  It also suggested that the British government deliberately let the HMS Sheffield be hit and sunk by Argentine missiles in order to give a boost to public support for the war.

The tape itself is difficult to listen to, but can be heard in its entirety online.

Newly-released files from the British National Archives show that the tape was taken seriously, with letters from the Foreign Office sent to the Office of the Prime Minister detailing how MI6, MI5 and the CIA were all consulted on the questions of the origins and authenticity of the tape.  The intelligence agencies all concluded that the tape was a fake: There appears to have been some disagreement over whether the KGB could have been involved in the shoddy forgery, with MI6 and the CIA casting doubt on the idea:

However, a State Department official was quoted as saying it was a Soviet operation, though the FCO discounted this and noted how an anarchist punk band were being reported as the culprits: You can download the full file from the Office of the Prime Minister here (pdf, 12MB).