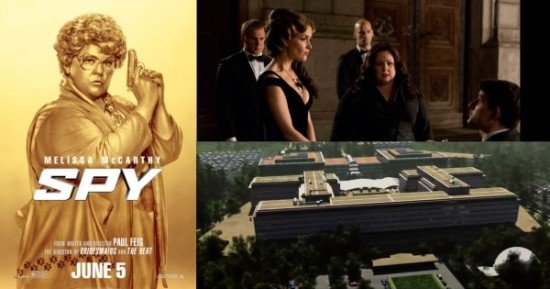 This week sees the release of Spy, a comedy starring Melissa McCarthy that was produced with the co-operation of the CIA.  It is getting rave reviews from critics and initial signs are that it will pick up a good share of the comedy awards available in the coming months.

I have not yet seen Spy, it doesn’t appear to have leaked yet but from the available information it is entirely in keeping with the CIA’s established history of involvement in comedy films.  It premiered back in March at SXSW – a series of festivals run in Austin, Texas.  This review says that the ‘biggest laugh’ came with ‘the extreme gross-out of star Melissa McCarthy sending a henchman backwards off a balcony and impaling him on a railing below, then vomiting in horror over his corpse. OK, no one said this film would be subtle.’

That review, along with the trailer for Spy gives us a good impression of what to expect: a film along the same lines as Meet the Parents, Meet the Fockers and The Interview, replete with crude jokes and cheap laughs:

The plot is astoundingly similar to a lot of the films we discussed in The CIA and Hollywood series, in that the story revolves around Susan Cooper (played by McCarthy) – a sympathetic central character who is taken from her stuffy analyst job at Langley and thrust into the world of blacks operations and espionage.  So once more we have the willing fool who is inducted into the secret world of the CIA, and through this vehicle the film inducts us into that same world.  This film is essentially The Interview with a ‘feminist’ twist.

Just like in The Interview, McCarthy’s character is picked for the job because she is an unknown agent, she is deniable.  Just like with the production of The Interview, the Agency’s involvement in Spy is of the quasi-deniable type.  The IMDB listing for Spy does not include a technical advisor or consultant of any kind.  I cannot find a single review referring to a consultant or advisor, let alone naming them.  However, Melissa McCarthy herself admitted in a recent BBC interview that she had an ‘ex’ CIA agent on set with her throughout filming:

McCarthy: She knows exactly what she’s doing, and, you know, the spoofs can be very fun –  it was the opposite of what we wanted to do with this movie.

Interviewer: Yeah, she’s whip-sharp but she’s also physically very capable as well, she can look after herself.

McCarthy: Yes, she can, and I think, I think that was really, uh, reasonable, and I talked to someone all throughout filming that had actually done that job, and it was, it was really…

Interviewer: What, a CIA analyst’s job?

McCarthy: Yeah, she was actually out in the field, she was someone who got a disguise, was in a location.

Naturally, McCarthy did not name this female former CIA field operative, but my guess would be Melissa Boyle Mahle, the technical advisor on Salt and Hanna.  Other possibilities include Carol Rollie Flynn, who helped promote Homeland and is working for the RAND corporation, and Valerie Plame who had an uncredited but major role in helping to produce the TV series Person of Interest, as well as other credited tech advisor jobs.  Likewise Sandra Grimes and Jeanne Vertefeuille, the writers of mini-series The Assets cannot be ruled out.  All of these women worked for the CIA and then went on to work in the popular culture industry.  Any of them, or someone else, could be the CIA agent who advised McCarthy throughout the filming of Spy.

As though this admission and the by-the-numbers CIA-friendly storyline weren’t enough, the trailer even includes – yes, you’ve guessed it – the signature shot of Langley:

However, the shot is extremely brief, and the colouring is somewhat different (more yellow-orange, less green-blue) so this suggests that the CIA are hoping you don’t really notice this ‘we were here’ tag.  There is also the question of why this film, which sounds like a good but relatively unoriginal comedy, is getting such high ratings from reviewers: Is it realistic that 28,644 people on Rotten Tomatoes have already rated Spy, presumably without having seen it?  Perhaps it is, but perhaps some of those positive ratings came from spambots run by the CIA’s public affairs office.  A quick IMDB comparison with other movies that are out this week does show that Spy has generated more buzz and more ratings than anything else, by some distance.  Spy currently has nearly 5000 ratings while Entourage has barely 1100, and the only other new films that get close to Spy have already been on limited release since last year, like A Pigeon Sat on a Branch Reflecting on Existence.

What is clear is that the CIA have stepped back since 2012 and have made their involvement in Hollywood a little better disguised.  Other recent or forthcoming films such as Kill the Messenger, Trumbo, Child 44 and the Barry Seal biopic Mena, as well as The Interview and Jack Ryan: Shadow Recruit do not list consultants or technical advisors and the CIA’s Entertainment Liaison Office is refusing to talk.  Yet every one of these films has every reason to involve the CIA in the production, and in some cases it is more than obvious that the Agency are or were involved.  Perhaps the debacle around Zero Dark Thirty led to this new policy of quasi-deniable support for the entertainment industry, or perhaps this was the strategy all along.