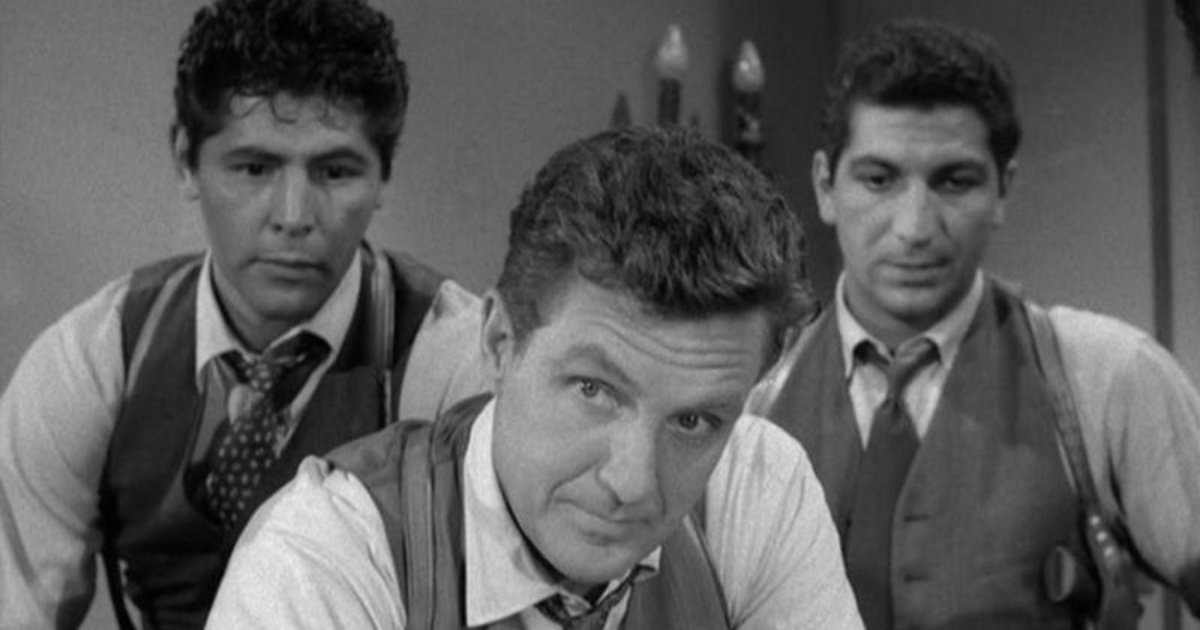 The FBI thought the TV show The Untouchables inspired Criminals

The Untouchables TV series (1959-63) was the first of its kind – a police procedural with explicit violence and action.  Up until then most detective stories focused on the investigation, but The Untouchables featured the gunfights and car chases that became staples of the genre by the 1970s.  It was also subject to investigation by the 1961 Senate Subcommittee On Juvenile Delinquency, who investigated the effects of TV on the behaviour of young hoodlums.

Taking their lead more from Westerns than other crime series (such as Dragnet, which was sponsored by the LAPD) The Untouchables weren’t always squeaky clean, but they got the job done.  Set in 1930s and based on the book by Eliot Ness it focused on the real-life exploits of a group of prohibition agents struggling against the mob.  It drew some criticism from Italian-Americans who felt slighted by its portrait of them, and the Capone family unsuccessfully sued the show.

However, it was in the Senate that they faced the biggest problems, being accused of encouraging young people to commit crimes.  Carl Perian – the chief counsel to chair of the subcommittee Thomas J Dodd, said:

We made films for each hearing. ABC complained that we took them out of context, so I said… ‘If they don’t want us showing excerpts, let’s show their own trailers.’ The next week, I ran 30 minutes of trailers for The Untouchables, and I swear to God, when it was over the room was shell-shocked. It was nothing but machine guns, bombings, and stabbings. We said, ‘All right, now what’s your complaint about showing excerpts?’

The FBI did not support the series (it featured treasury agents, not feds) so their file is almost entirely newspaper clippings covering the various controversies around the show.  Clearly the FBI, or someone senior with the Bureau, thought that the show helped inspired criminal violence and so kept tabs on what was being said about it.

One story records how they reached an agreement with Italian-American groups who were objecting to the relentless portrayal of them as mobsters, by putting a limit on the number of Italian names used in the series and writing in a bigger role for the Italian detective.  Another article accuses ‘the so-called racial, national and religious minorities’ of becoming ‘more sensitive than ever’.   A further story records how James V. Bennett, director of the Bureau of Prisons, began a campaign against the show because it portrayed prison guards in an unfavourable light.  I will be examining the Bureau of Prisons’ influence on popular culture in depth in an episode of ClandesTime.

Only one memo in the whole file actually refers to an incident of criminals being inspired by The Untouchables, despite several years of reports about the affect the show was having on crime.  The case was a petty armed robbery by two idiots who stole $20 and got caught shortly afterwards, though they did admit to getting their ideas from the TV show. 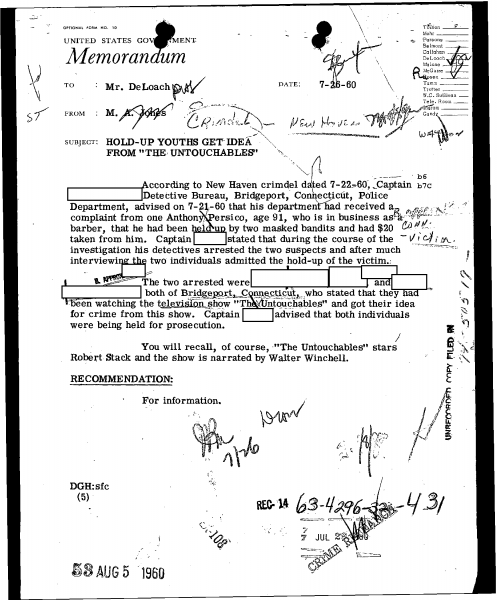 FBI File on The Untouchables