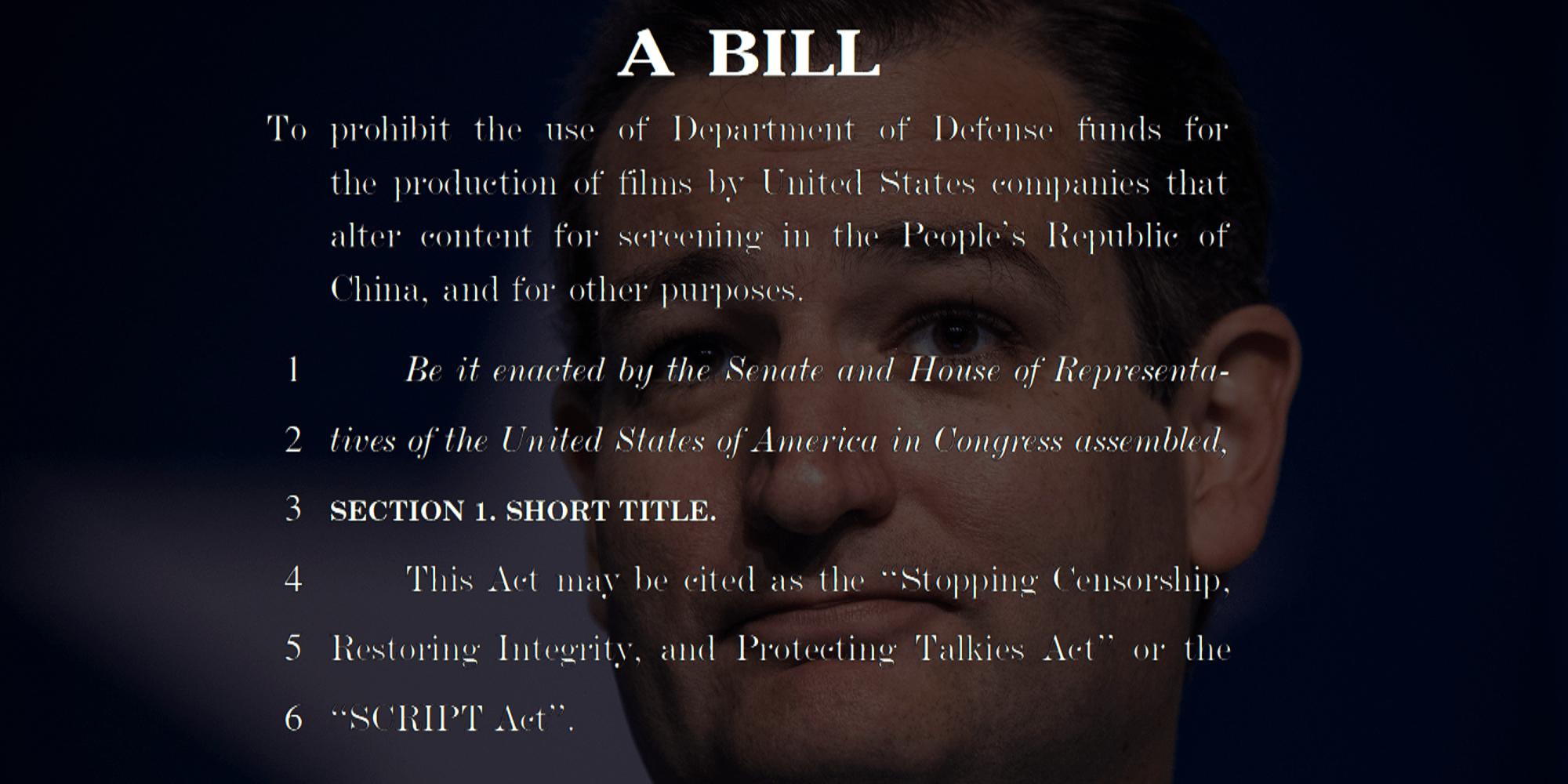 Ted Cruz has always been a rich dumbass but his latest legislative venture breaks his own record of cretinous behaviour.  His curiously-timed SCRIPT bill (the Stopping Censorship, Restoring Integrity and Protecting Talkies Act) calls for withdrawal of Pentagon funding for any film that is submitted to the Chinese Communist Party to try to gain access to the Chinese market.  This is not just a hilarious and hypocritical violation of free trade but it overlooks the far greater censorship involved in US military support to movies and other pop cultural products.

In an oddly supportive but also critical article in The Week, Jeva Lange pointed out the politicised timing of this latest anti-China effort by Cruz:

First, it must be said that, although I suppose it’s possible that Cruz is purely motivated by protecting the artistic integrity of the cinema, the timing of this move is suspect. In the weeks leading up to the SCRIPT Act announcement, Cruz has railed against an alleged “Chinese Communist [Party] cover-up” of coronavirus and promoted unfounded conspiracy theories alleging COVID-19 escaped from a Chinese government lab. He’s also made sinophobic comments about “bat soup in the Wuhan province.” At the end of last week, Cruz announced legislation intended to stop Chinese outlets from using Canadian or Mexican stations to (in Fox News’ words) “spread foreign propaganda across U.S. airwaves.” Sticking it to Beijing is a popular move right now, especially for Trump-defending Republicans looking to spread blame for the devastating outbreak. Nevertheless, the case may be that Ted Cruz has landed on a good idea with the wrong motivations.

Cruz’s bill proposes that the DOD only provide funding (or technical advice or access to DOD assets) to film-makers if they (a) provide a list of all films they’ve made in the last 10 years that have been submitted to the Chinese authorities to try to get permission to distribute that film in China and (b) sign a contract agreeing not to make any changes to the new, DOD-assisted film in response to demands from the Chinese authorities.  It goes on to say that any film that is co-produced with a Chinese-owned company and which therefore would be subject to influence from that company, who are already familiar with the demands of the Chinese authorities, should be denied DOD support completely.

Let’s break this down.

In 2007 the US brought a World Trade Organisation case against China for its heavy restrictions on import and distribution of American-made films.  At that time only 20 films were allowed, and the government often placed limits on how many DVDs could be sold, and so on.  The WTO found in favour of the US and gave China until 2011 to comply with ‘free trade’ laws.  They didn’t, so in 2012 the US and China negotiated a deal to stave off further action from the WTO.

Under the new deal the Chinese government increased the quota from 20 to 34, but said that the additional 14 films had to be 3-D or IMAX films, maintaining the standard format film quota at only 20.  This is one of the main reasons we saw such an increase in IMAX and 3-D films at this time, it wasn’t so much for Western audiences but for the Chinese market.  The new deal also increased the revenue-sharing percentage for the American studios, from 13% to 25%.

The US fought hard to gain access to the increasingly lucrative Chinese film market, which is now approximately the same size as the domestic US market, COVID restrictions and the impacts of those restrictions notwithstanding.  But Cruz’s legislation, if passed, will have the effect of restricting or even preventing US films from being distributed in China, or least forcing film-makers choose between gaining US military support and making money in China.  It basically says that the DOD cannot support a film if the film-makers are willing to make changes to it to appease the Chinese censors.

But some of the biggest, most successful US films in China have been supported by the DOD (as I have pointed out previously) including Avatar, Transformers 5 and Furious 7.  Amusingly, this could lead either the Chinese government or the Hollywood studios to sue the US government (and possibly Ted Cruz himself) for unreasonable restrictions on their freedom to trade, as this legislation would deny them the ability to modify their films for the Chinese market.

To be clear, this modification takes two forms.  The first is that the finished film is submitted to the Chinese authorities and they demand a few small changes – such as the removal of a scene in Skyfall where Bond kills a Chinese security guard, or the removal of a shot of clothes drying on a washing line from one of the Mission: Impossible movies – that don’t meet with their approval.  This process only affects the version of the film that is shown in China, and is a standard practice across the world with various governments making various demands of film editors in exchange for allowing the film into their country.  In the video game industry this process is non-controversial, and is called ‘localization’.

The other form is self-censorship, where a company either asks Chinese officials to provide advice during pre-production (as with Iron Man 3) so they don’t have to make changes later on, or where a US company co-produces a movie with a Chinese company and the Chinese company is already intimately aware of the restrictions on the Chinese market so they suggest changes in pre-production to ensure there are no problems.

The former is straightforward government censorship, but the same thing happens in everywhere from Germany to Jordan.  It’s only when it’s the Chinese government doing it that it becomes a hot-button political topic and assclowns like Cruz leap in and pretend to play the saviour.  The latter, one could argue, is actually a manifestation of free speech – if a film company wants to make alterations to their film for commercial reasons (which is ultimately what pretty much all film makers do) then why should they be prohibited from doing so?  Again, we could see legal challenges to Cruz’s legislation, not just on commercial free trade grounds but also on First Amendment grounds.

While most of the US media coverage has been quite supportive of Cruz’s proposed SCRIPT act what Cruz and all of these journalists (with the exception of Lange) have overlooked is that the DOD censor film and TV far more deeply and broadly than the Chinese government does.  While the Chinese government only directly affects the versions of films shown in China, the DOD affects all versions of the movies they support.  Their script review process is as stringent and neurotic as that of any Communist state, and they affect a much larger number of films and TV shows, particular at the top end of the market.

So if this was truly about stopping censorship then this legislation would ban the practice of allowing the DOD to censor film scripts.  But it isn’t.  It’s about economic nationalism, cultural hegemony and the greater glory of Rafael Edward Cruz.  It underlines the exceptionalist approach to the US culture industry – that some Americans believe they should be able to export their films to any country they like without having to acknowledge or comply with the cultural norms of those countries in any way.  The implication – that American cultural values are the only right and true values and that the rest of the world should simply accept them – is little more than a desire for cultural oligarchy and a refusal to accept that the US is no longer the world’s only superpower.

To be clear, I am opposed to political censorship no matter who is doing the censoring, but I accept that different societies have different standards and moral codes and social mores and thus that a degree of social censorship is inevitable.  If a country doesn’t want to flood its film market and the minds of its youth with a bunch of cheap, hypersexualised trash then they should be under no obligation to do so, just as film-makers should be under no obligation to avoid offending the US military’s snowflake fucktard fun police.

As such, this legislation isn’t about restoring integrity (whatever the hell that’s supposed to mean beyond an appeal to the good old days of Jim Crow laws and protestant-only protagonists) but is about entering into a cultural censorship war.  This follows the trend in much of the media coverage about Chinese film censorship, which is often little more than red-baiting and variously calls for cinema to be treated as a ‘national security issue’ and says we need more films where China is the villain.  It is a call to arms which positions the Pentagon and the Chinese government in diametric opposition, with Hollywood films being the battleground.

And I’m not at all convinced that’s going to be good for anyone.  Except maybe Ted Cruz.

Oh, and it also appears to put the lie to the Pentagon’s claims that their entertainment liaison offices don’t provide funding to movies.  Or means that Ted Cruz is looking into totally the wrong place, since his bill would prohibit something that officially isn’t actually happening.  Or maybe both.