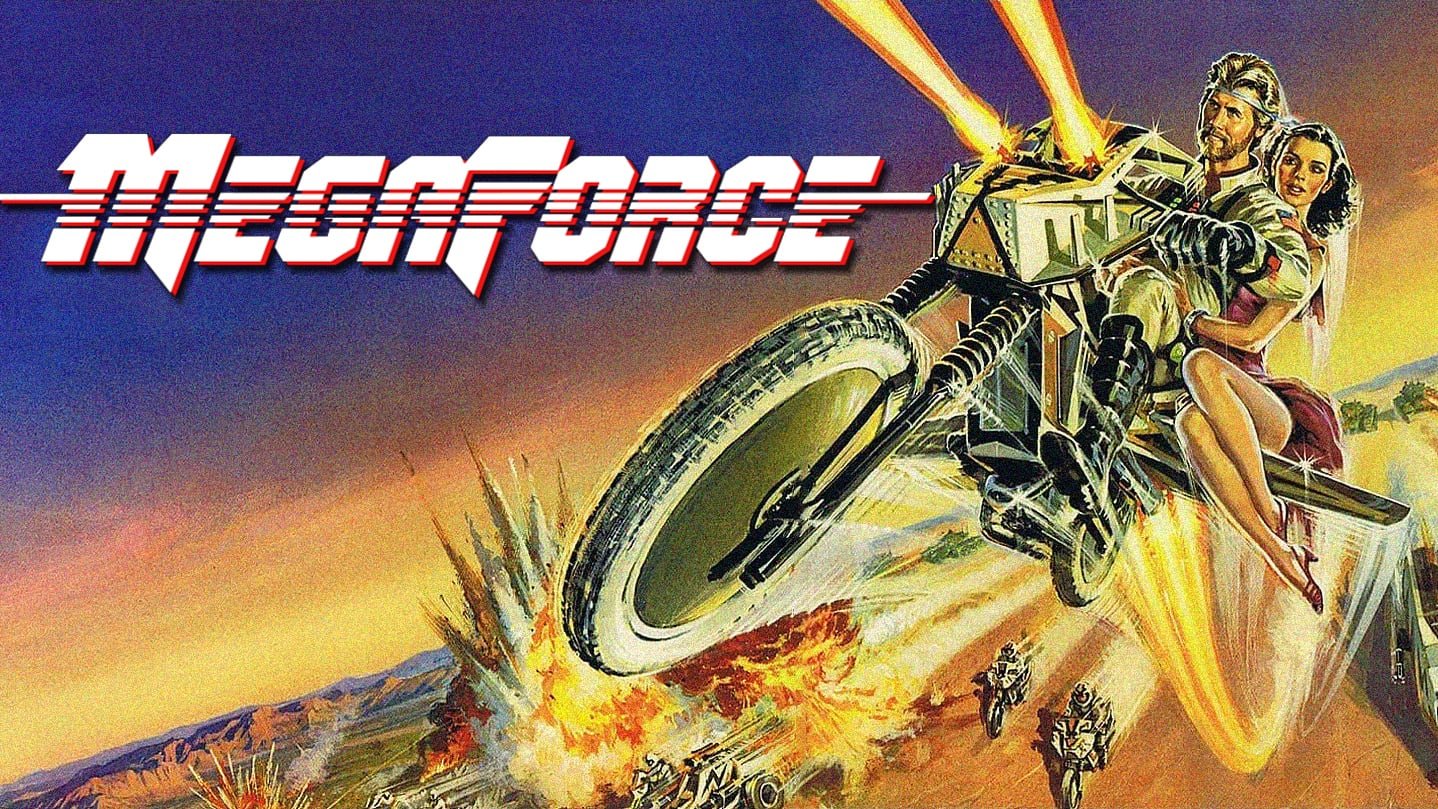 MegaForce has to be one of the dumbest movies the Pentagon has ever supported but hidden until now is the story of how its entire premise was rewritten at the Pentagon’s behest to help shape the public’s perceptions of the future of the US military.  While the original screenplay featured a private army who ‘defend Western democracy’ by engaging in war to protect US interests in the Gulf of Oman the finished film has a very different storyline.  This was a direct result of interference by the DOD’s film office, who were concerned with the diplomatic fallout of US unilateralism as they expanded their power.

The movie itself is mostly awful – a tediously right wing tale of futuristic fighters who fly around the world dropping democracy on foreign countries and riding across the desert liberating oppressed people by shooting them with laser cannons.

THE USE OF AIR FORCE’S C-130 AIRCRAFT ALONG WITH PERSONNEL WAS APPROVED, SINCE THE FILM POSED NO THREAT TO THE DEPARTMENT.

The phrase ‘posed no threat’ is a strange way of putting it – particularly given some of the early discussion about the movie.  A file liberated from the Suid archive by Roger Stahl sheds light on where the movie was when the request for military support first came in, and thus how much was changed to suit the Pentagon’s demands.

For example, an early Don Baruch memo cast doubt on the project, saying there was an issue with their equipment being seen in the film being used by a private army, as well as the geographical context of that army’s mission:

If the basic theme is not taboo, is the story point of the force being used by the “only country standing between hostile forces and the straits through which the world’s oil supplies pass” acceptable?

Other military reviews of the script emphasised these points, with a memo from USMC Colonel Michael K Sheridan explaining:

The basic story-line that a private army exists in the US, available as “the court of final appeal” to besieged free world governments, is rather incredible. The USG has clearly demonstrated that such organizations are illegal and subject to prosecution. However, should an agency of the USG support the film production by providing military equipment, such support might be construed as tacit acceptance of the concept, at least by those who wish to embarrass the USO. Furthermore, when the story—line includes employment of the private army in support of the “only country standing between hostile forces and the straits through which the world’s oil supplies pass” (a relatively clear reference to Oman), the sensitivity of this incredible story is raised. Countries in that region are sufficiently xenophobic and suspicious of US intentions with regard to oil in the region that we would not want to provide even a gratuitous basis for reinforcing their concerns. Therefore, it would not be in the best interests of the USG to support the production of this film.

However, both the Air Force and the National Guard ended up supporting the movie, renting out men and vehicles on a ‘courtesy’ basis and charging full rates – the Air Force alone charging nearly $167,000.  The regulations cited in the file make it clear that such costs can be reduced or waived, and that different rates can be applied depending on how beneficial to the military the project is deemed to be.

There was an issue in securing C-130s from the Air Force, and the DOD demanded the producers try to find suitable aircraft from private commercial sources.  But when this proved impossible, the military did arrange for a couple of planes to be moved to a base near the filming locations so they could be used in MegaForce.

The script negotiations lasted some time – all the references to Oman were removed, but this wasn’t enough for the Pentagon.  Even when the location was switched they were still concerned, with another later script review saying:

Although the story and concept are fiction, the theme is one that could be perceived by citizens and governments around the world as having parallels or similarities with certain act1v1ties that are taking place today or being planned for the future. As you know, the US is embarked upon a strategic path that promises development of a force projection capability to protect its vital interests around the world. The Rapid Deployment Force is a most familiar element of that strategy. In addition, follow-up agreements to the Camp David Accords include development of a multi—national peace—keeping force for the SINAI. Finally, we are continuing a process of negotiations with many nations, e.g., Kenya, Oman, etc., for certain rights and support to help bring realism to our strategy.

There are certain sensitivities of the nations in the Persian Gulf, Middle East, and Africa, stemming from the days of colonialism and protectionist policies towards their natural resources, that we must respect and not offend. The implications of the proposed movie could offend these sensitivities if the fiction of the screenplay were erroneously extended to the realities of today or the near future.

Eventually, the private army were rewritten as an international force, but obviously still representing the West, America, democracy and bombs in the shape of apple pies.  The countries were fictionalised and the story rewritten so that our ‘heroes’ are shown liberating a US-friendly nation from a hostile neighbouring rogue state.  As the Wiki summary puts it:

The story involves two fictional countries, the peaceful Republic of Sardun and their aggressive neighbor Gamibia. Unable to defend themselves from a Gamibian incursion, Sardun sends Major Zara and General Byrne-White to ask the help of MegaForce – a secret army composed of international soldiers from throughout the western world, equipped with advanced weapons and vehicles. The MegaForce leader, Commander Ace Hunter, will lead a mission to destroy the Gamibian forces, which are led by his rival, and former military academy friend, Duke Gurerra.

Curiously, I stumbled across an article reviewing the film that claimed that it was the director’s decision to depoliticise the movie and fictionalise the setting:

There is little fleshed out about the political situation and seems like both fictional nations heavily recruit foreign military leadership. The director purposefully designed the conflict in which MEGAFORCE is inserted to be involving fictional nations to avoid any heaviness or political heat.

In reality, this was done because the Pentagon demanded it, even though they offered no additional technical advice or reduced cost to the film-makers and charged them the normal commercial rate.  In a letter from the middle of the script negotiations, when the DOD were still refusing to support the movie without substantial changes, Baruch said:

By assisting, they believe, the DOD not only could suffer the possible criticism of corroborating the story, but also acting in an irresponsible manner regarding consideration of the sensitivities of nations whose cooperation the US Government needs to bring realism to the strategy of projecting power overseas.

Expressed more simply, the script portrayed the MegaForce acting unilaterally, without the permission of host governments or regional allies.  As the US sought to grow its military capability to the point of being able to project their power anywhere in the world, they needed at least the appearance of local permission or international consensus.  A raw, naked portrayal of America flexing its muscles abroad was not what they needed, so the plot had to be rewritten to accommodate these diplomatic and geopolitical concerns.  It had nothing to do with the director.

Ultimately, this is a tale of a bad military sci-fi movie that was almost wholly rewritten to suit the Pentagon’s desired image not just for the present, but for the future.  The film is set in the future (at least for the time that it was made) and the documents make references to where the US military wanted to be in the years to come.  This is a clear cut example of pre-emptive propaganda not for a specific event or even a specific war, but for something greater – the Pentagon’s own desired future image of its role in the world.

Ultimately it was a dismal failure because the film flopped and it was only seen by masculinist fucknuts who would support the Pentagon no matter what.  Nonetheless it is an interesting experiment in using sci-fi to shape people’s perceptions of the very real future that we are all now living in as the present.