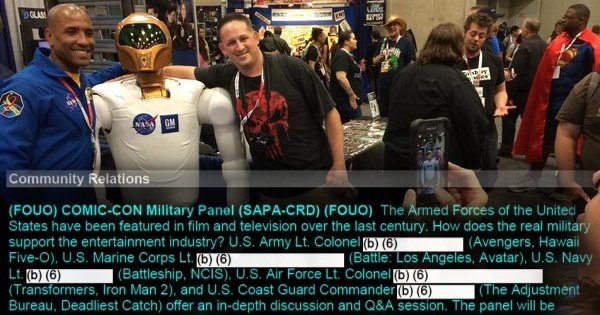 The Pentagon, NASA and Comic-Con

Comic-Con has been a useful (and fun) hunting ground for the Pentagon’s entertainment liaison offices for several years, but NASA have recently jumped on the bandwagon.  The combination of nerds and sci-fi fanatics has proven too alluring to ignore and so one of the world’s biggest scientific institutions has joined the world’s largest military organisation in exploiting this opportunity.

Recap: The Pentagon and Comic-Con

The relationship between the Pentagon and the comic book industry goes back a long way, but several recent examples are worth recapping.  In 2005 Marvel Comics produced a special ‘Support Our Troops’ edition featuring the Avengers and the Fantastic Four as part of a Pentagon propaganda campaign.  1 million of these comics were distributed to soldiers in the US military, especially those deployed as part of the occupation of Iraq.  They had complained (poor dears) that there was a shortage of comics in the country.

In 2011 DARPA – the Defense Advanced Research Projects Agency – came up with the bright idea of using comics as a form of therapy for returning soldiers suffering from the traumas of war.  They developed software enabling soldiers to tell their stories in comic book or graphic novel form, comfortingly named the ‘Online Graphic Novel/Sequential Art Authoring Tools for Therapeutic Storytelling’.  Even when the Pentagon is being sensitive they still can’t break out of the emotionally detached, technocratic mindset.

Since at least 2010 the Department of Defense has been regularly involved in the San Diego Comic-Con.  The reports of the ELOs of the US Army, Air Force and Marine Corps all refer to military-sponsored events at Comic-Con, some even before the first military panel there in 2011:

After this 2011 event the Army’s reports note that ‘Other entertainment venues have since come online asking for similar Joint military panels to discuss working with the military.’  Since then participating in panels has become a regular part of the ELOs activities, from Comic-Con to the Producers Guild.  By 2014 the Air Force was referring to Comic-Con as a ‘key annual networking and outreach opportunity’.

In the same year NASA made their first big splash at Comic-Con with Buzz Aldrin and others touching down and participating in a panel discussion titled ‘NASA’s Next Giant Leap’.

It was this appearance that led to NASA’s appearance in the 2014 Wastebook, which detailed how they spent nearly $10,000 sending nine staff to San Diego for Comic-Con.  The Wastebook entry also records how NASA assisted with an Avengers-themed museum exhibit:

Marvel’s Avengers S.T.A.T.I.O.N. (Scientific Training and Tactical Intelligence Operative Network) at the Discovery Center in Times Square brings “to life the science behind Marvel Super Heroes” and explores “the history and scientific origins of Marvel’s The Avengers, including Iron Man, The Hulk, Captain America, Thor, and others.” The exhibit opened May 30, 2014 and will run through January 5, 2015. Tickets prices are $27 for adults and $19.50 for children.

Avengers S.T.A.T.I.O.N. includes “authentic props from the Marvel movies — including Thor’s hammer, Captain America’s star-spangled shield and Black Widow’s form-fitting costume,” as well as “a life-sized, three-dimensional hologram of the Hulk, who punches the wall making the whole building shake.” And “visitors will map out the stars to find Asgard,” Thor’s fictional world.

NASA provided content to “enhance the authenticity of the experience and pique visitors’ interest in real-world science and technology. The exhibit’s NASA-supplied material — written content, images and videos — focuses on topics such as the electromagnetic spectrum, black holes as powerful energy sources, and aerospace materials used in creating Iron Man’s armor.

All of which reminds me of the museum exhibit in Captain America: Winter Soldier, which Captain America himself goes to see and which is the setting for the final post-credits sequence.   Was this some sort of promo for the real life exhibit?  The film, like the original, was assisted by the Department of Defense.

As the Wastebook entry notes, these sorts of promotional activities help NASA secure its budget.  While nowhere near its mid-1960s peak, NASA still commands the best part of $20 billion per year.  Its recent budget peak was in 2010 and it was cut down for a couple of years after that.  However, thanks to the enormous success of NASA-assisted films like Gravity, Interstellar and The Martian (along with both The Avengers, the sequel Age of Ultron and Guardians of the Galaxy) that number is now increasing.  It was recently reported that NASA are being given a bump of $1.3 billion next year, putting them back above 2010 levels of funding.  All this while Detroit is bankrupt, homelessness is on the rise and ‘sequestration’ sees continual cuts to services the voting and taxpaying public actually want.

The Science and Entertainment Exchange

Another organisation of increasing importance is the Science and Entertainment Exchange, ‘a program of the National Academy of Sciences (NAS) that connects entertainment industry professionals with top scientists and engineers to create a synergy between accurate science and engaging storylines’.  They are funded by ‘grants, private donations, and National Academy of Sciences endowment funds’.  While technically a private organisation a list of recent projects on their site shows that they do work on a lot of the same films as major government agencies like NASA and the Pentagon:

For some reason this list doesn’t include Age of Ultron but like NASA the Science and Entertainment Exchange did work on that film too.  The more crucial point is that most of these films are total fantasies, not ones that employed a huge amount of technical accuracy, so exactly what the advisors did on these films isn’t particularly clear.  But then, the website of the Science and Entertainment Exchange was hacked recently and it took them two months to restore and repair the site, suggesting that they aren’t half as scientifically and technologically savvy as they like to make out.  And yes, before you ask, the Science and Information Exchange is involved with at least one of the Pentagon’s ELOs:

This crossover between science and fantasy, between real-world exploration and fiction-making is nothing new in human culture.  It is to be expected that when pondering the unknown that humans will engage their imaginations and entertain dramatic fantasies of discovering something new that changes the world.  But that has little, if anything, to do with Comic-Con and the movies mentioned in this article.  Most of them are about technology and human development (and thus transhuman development) being subsumed under the military mission of protecting and saving the world.  As such, while NASA’s role in films and TV shows is less malevolent than the Pentagon’s – at least as far as we know – as it increases in influence we should expect it to come more explicitly on board with the overall philosophy guiding government involvement in the entertainment industry.

An entry from the 2015 Wastebook hints at this future, which is much bleaker than the one NASA likes to portray.  It details over $200,000 being spent on a project by the Georgia Institute of Technology to find out if artificial intelligence was capable of telling an interactive story.  They created a piece of ‘interactive fiction’ software  called Scheherazade IF which crowdsourced plots for the sorts of interactive tales that have become popular in video games (choosing which path to take, whether or not to kill someone in the game, and so on).  Its storytelling ability was then tested with generic examples, before the arbiters of this very dubious science concluded that, ‘human authored interactive narrative still remains the most cost-effective means of generating an interactive narrative experience’.  Nonetheless, this hints as a future where creative storytelling by real people is done solely for the purposes of psychological therapy, and all mass entertainment stories are actually written by computers.  Naturally, the people most interested in determining what such a computer does and does not create would be those working for NASA, the Pentagon and organisations like the Science and Entertainment Exchange.

You can download the 2014 Wastebook entry on NASA going to Comic-Con here, and the 2015 entry on AI storytelling here (both PDF).