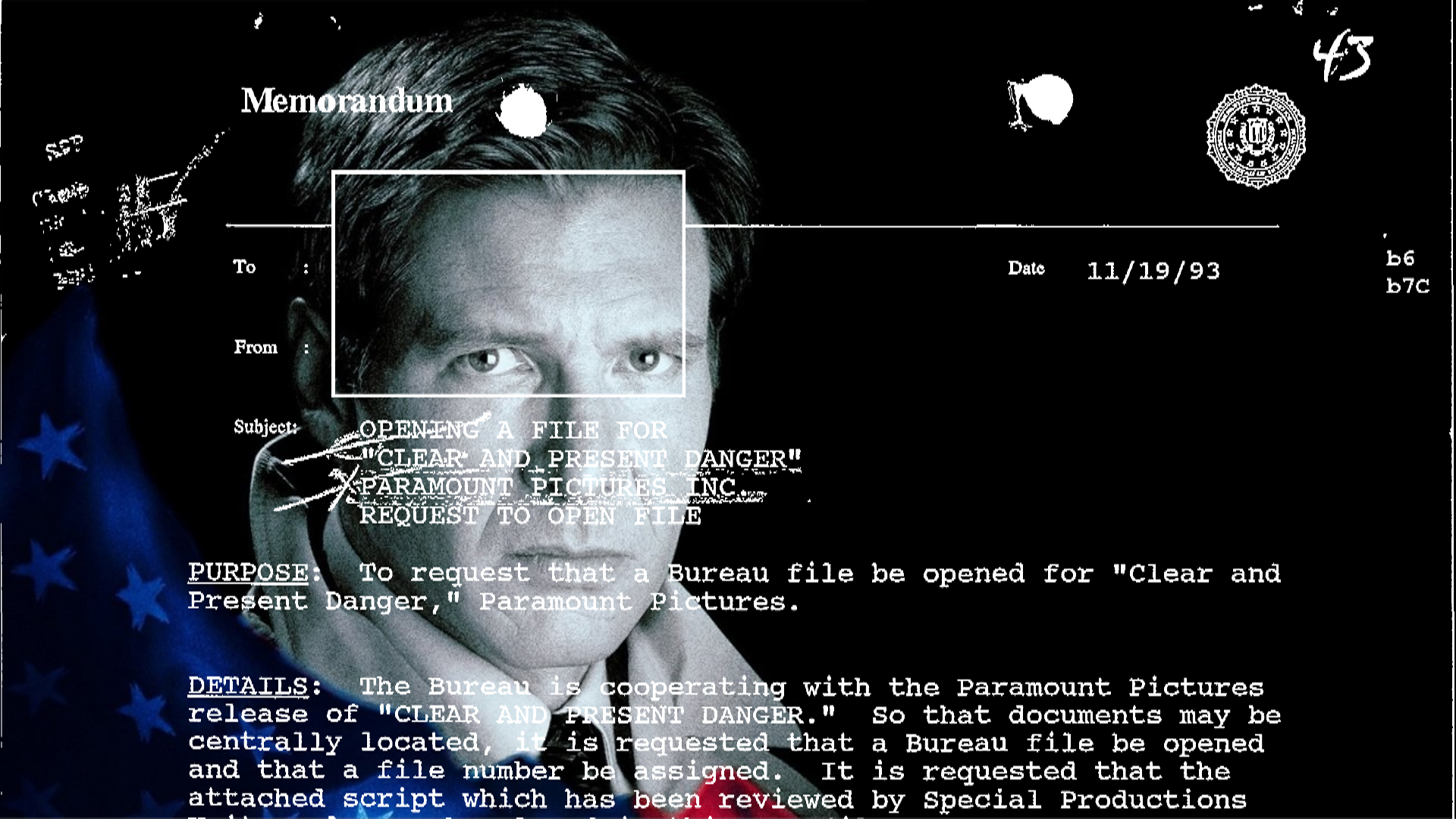 Among the numerous agencies who vetted and reviewed the script for the 1994 film adaptation of Tom Clancy’s Clear and Present Danger was the FBI.  They recently released their 150-page file on the movie, which predicted that the movie ‘will undoubtedly be one of the most important pictures of the year’ and details the FBI support and their issues with the screenplay.

I have written before about how Clear and Present Danger had input from the DEA, White House, State Department, CIA and a host of DOD and military branch officials before it was given the go-ahead.  Clancy’s original novel was obviously intended as an inversion of the Iran-Contra operations, where instead of the US government getting into bed with drug dealers to fund black operations in Latin America, in the inverted version the US government runs black operations in Latin America against drug dealers, to try to stem the flow of drugs into the country.

A novel concept, given how the book came out in August 1989, just weeks after Congress published a report exploring how key documents had been withheld from the congressional investigations into Iran-Contra.

However, the book depicts some of the blackest of black operations – shooting down planes simply because they were suspected to be carrying drugs (Barry Seal, watch your ass!), numerous assassinations and airstrikes, all of which nearly starts a war.  There is no accountability for those involved and the overriding picture of the US government is that it is corrupted by the War on Drugs and has lost control of itself.

Much of this was worked into early scripts for the movie version, but this proved problematic for the various agencies involved, resulting in lengthy negotiations and a heavily diluted version of the story making it onto the big screen.  As Clancy himself put it, ‘Clear and Present Danger was the No. 1 best-selling novel of the 1980s.  One might conclude that the novel’s basic story line had some quality to it.  Why, then, has nearly every aspect of the book been tossed away?’

Perhaps the most important change is that while in Clancy’s novel the President is a fully-involved participant in the conspiracy, and essentially covers it up and gets away with it (much like Reagan’s role in Iran-Contra), in the movie version the President’s role in the conspiracy was reduced and obfuscated so it’s unclear exactly how much he does and doesn’t know.  At the end, after saving the day, Jack Ryan testifies about the illegal operations in front of Congress, rather than confronting the President in private.  Instead of being a story about political corruption and a conspiracy that goes all the way to the White House, the movie lets us know that if the President even marginally crosses the line, the CIA, FBI, Congress and the system in general will hold them to account.

The FBI’s Role in the Movie Version

The Bureau enter our story in November 1993, with a memo requesting and recommending that they open a file on Clear and Present Danger.  Two days earlier a Special Agent at the Los Angeles office had faxed the FBI director (the notorious Louis Freeh) outlining his conversations with a ‘Washington Representative of Paramount Pictures’, and summarising the movie’s plot:

“Clear and Present Danger” is a Paramount release based upon the Tom Clancy novel known by the same name.  Harrison Ford (“Star War” “Raiders of the Lost Ark” and “The Fugitive” as well as numerous television appearances including “The FBI”
series with Efrem Zimbalist Jr) will star in this picture. The story opens uith the murdera at sea of a prominent American businessman who is closely tied to the President of the United States. Investigation eventually links the businessman to a
Columbian drug cartel – he has apparently murdered after attempting to skim illicit drug monies from cartel operations.

The director of the FBI is dispatched to Columbia by the President to negotiate the ultimate distribution of the murdered Businessman’s assets (which mere found to be secreted in numbered Swiss bank accounts). Shortly after his arrival in Columbia the
Director and the american ambassador to Columbia are assassinated.

A covert anti drug effort  involving the deployment of American military personnel to columbia ensues with tacit approval from White House personnel. A military officer is eventually captured by cartel members and he is dramatically rescued by a CIA intelligence official (Harrison Ford).  The cartel head is killed by the CIA official and upon his return to the United States this same official exposes the covert anti drug effort to the congress implicating high administration officials.

As you can see, by this point many of the script changes had already been effected by the DOD and CIA, but the FBI were on hand to make some objections of their own.  All the producers wanted was permission to use the FBI seal and logo in a scene or two, but the Bureau are so tightass they insisted on set visits, meetings with the movie’s director Mace Neufeld, and a full script review.

Before the screenplay arrived, a producer got in touch with a pair of questions about the FBI director’s role in the movie – going to Columbia, being assassinated, and his body being flown back to the States:

Would the case agent be at Andrews AFB when the Director’s body was arriving from Columbia ?
What kind of plane would the Director use to travel to Columbia ?

I checked with SSA [redacted], Director’s Security Detail, even though the Director would probably fly to Columbia on a commercial flight, he thought, from a security standpoint, it might be better to show him arriving via a military transport shuttle.

So much for ‘OPCA is assisting to ensure accurate input’, when their own advice to the film-makers was to depict things how the FBI wanted, not how they really are. OPCA is the Office of Public and Congressional Affairs, one of the predecessors to the FBI’s Investigative Publicity and Public Affairs Unit.

But there was a bigger problem than making the FBI director look safe and secure – should he even be in Bogota, getting assassinated, in the first place?  A handwritten note on the front of the FBI’s copy of the screenplay notes all mentions of both the FBI in general and the director’s trip to Bogota specifically, saying ‘believe they will change this to another official since FBI has little business in foreign nations’.

This appears to be the result of conversations with the Bureau’s public affairs staff, and resulted in dialogue being written in to give the FBI director an excuse to go to Columbia – the President orders him there because he knows the Columbian attorney general, and they are negotiating over hundreds of millions in laundered drug money.

The FBI’s reviewers also took issue with the President using the racist term ‘monkeys’, in reference to Latin Americans. 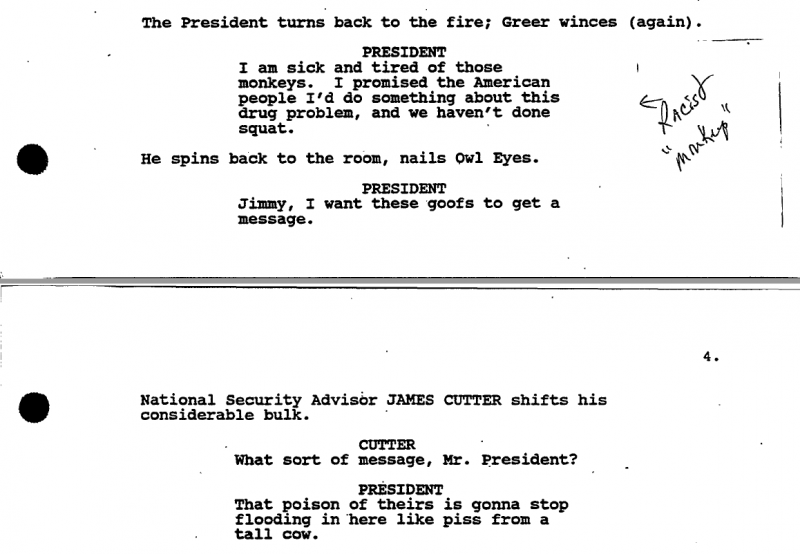 This line did not appear in the finished film.

Indeed, the President in Clear and Present Danger is much milder and more Clintonesque (Billary, not Hitlery) than the rather Trumpian character that the earlier scripts contain.  So this is further evidence that the government’s entertainment liaison offices don’t simply protect their own public image through film and TV, but often use their influence to shift and shape depictions of the President and the White House too.