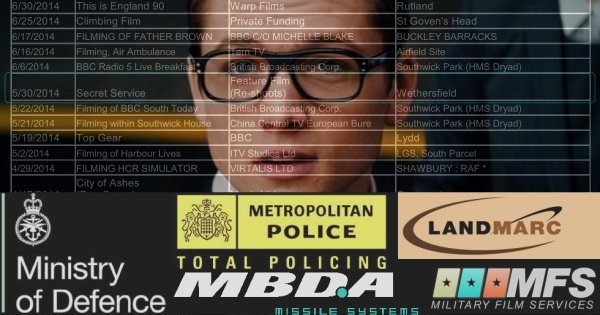 The Secret State Involvement in Kingsman

Kingsman is perhaps the most intriguing film of the year – on the face of it a cartoonish action comedy set in the world of gentlemen spies, but underneath it is an ultra-violent, racist, eugenicist film of dubious sexual virtue.  No government agencies were listed in the credits for the film but at least two were involved in the movie.  This confluence of quasi-deniable government involvement in an entertainment production and comedy being used as a trojan horse for darker real-world themes is a recurring phenomenon.  However, Kingsman takes this further than perhaps any other recent movie.

The Metropolitan Police and Kingsman


The protagonist in Kingsman – Eggsy – is a working class lad who is brought up by his single mum because his father was killed while on a mission for the Kingsmen – a secret society/parallel  intelligence service.  Like a lot of young chavs he gets into trouble with the police, and ends up in Holborn Police Station, played in the film by the real Holborn Police Station.  Eggsy is sprung from trouble by Galahad – one of the Kingsmen played by Colin Firth.  The policeman questioning Eggsy gets a phone call explaining the situation, and Eggsy is set free.

In our review of Kingsman on ClandesTime, Adam and I pondered whether this sequence functions as a metaphor for the security state’s involvement in the film.  Just as the police in the film are gazumped by a more senior organisation, is this what happened in real life?  The Metropolitan Police are not credited for allowing the movie to film on their property, and when I filed a FOIA request for records about this my request was ultimately refused on grounds of commercial confidentiality and security.  This is relatively standard for the Met Police – they try not to release anything in response to Freedom of Information requests – but this unnecessary secrecy begged the question of whether an institution higher up the food chain also provided uncredited production assistance on Kingsman, possibly using the Met Police as a cover.

The Ministry of Defence (and Kingsman)


Unsurprisingly, this suspicion turned out to be somewhat accurate.  After a lengthy back and forth with the FOIA department of the Ministry of Defence (MOD) I received a list going back to 1991 of productions that had been granted licenses to film on MOD property.  After literally months of badgering them they explained that the MOD do not run a central bureaucracy for handling requests from the entertainment industry – there is no British equivalent of the DOD’s Entertainment Liaison Offices.

Instead, many MOD properties are managed maintained by a private company called Landmarc Solutions, who provided all kinds of government services, especially for the military.  They also manage requests to film on these MOD properties.  Their website describes their filming locations service:

Landmarc Event Locations is a searchable database dedicated to showcasing Ministry of Defence sites that are available for commercial use. The Ministry of Defence (MOD) is one of the UK’s largest landowners with some 220,000 hectares, consisting of some 4000 built and rural sites. There are more than 45,000 buildings (excluding housing), including barracks, bunkers, naval bases, historic buildings, hangars and warehouses. The rural estate includes areas of outstanding natural beauty such as woods, plains and lakes, many of which are untouched by modern buildings or features.

The estate has provided locations for filming a wide range of productions including popular series such as EastEnders, Casualty, Top Gear and Doctor Who, factual programmes such as Coast and Countryfile, drama including Silent Witness, Midsomer Murders, Sherlock, 24: Live Another Day, The Tunnel, Poirot and Miss Marple, feature films such as Skyfall, Anna Karenina, Les Miserables, X-Men, Mission Impossible, Edge of Tomorrow, The World is not Enough, The Monuments Men and The Man from UNCLE. Photo-shoots and music videos have also taken place on the estate utilising the wide range of often unique features.

It is clear from the site along with the application form and the guidance offered to filmmakers that scripts are reviewed prior to granting permission, and that Landmarc do not just manage locations but also have some responsibility for MOD vehicles and personnel.  The application form ask ‘if there is any military content regardless of era, including the possible depiction of any existing MOD establishments’ and ‘If the request contains any military content it will have to be cleared by our PR Department’.  The email address where you send your application goes through the MOD’s website, suggesting that while Landmarc are handling this whole process, they are doing so under MOD supervision.

The database provided by the MOD is patchy, in some cases lacking both the title of the production and the production company, leaving only a date and filming location.  It also appears to be incomplete – there is no mention of Skyfall even though Landmarc mention it on their site and indeed the entire Home Alone sequence at the end of the movie was filmed in a specially-constructed building on MOD land on Hankley Common.  The database mentions Spectre and Bond22 better known as Quantum of Solace, but no others despite several in its timespan being filmed with MOD assistance including The World is Not Enough and Die Another Day.  However, it does mention Kingsman, under the name ‘The Secret Service’, which appears in September 2013 and May 2014.

Whether the MOD had any influence over the script of Kingsman is not clear.  There is no explicit military portrayal in the film, though the Kingsmen are in effect a British commando unit (not unlike that run by Ian Fleming during WW2) and in the backstory of the protagonist Eggsy we are told he dropped out of the Royal Marines.  As such, the MOD would logically have an interest in shaping the film, if only for PR and recruitment purposes, but the database and other Landmarc documents only hint at this.

Three non-governmental firms are credited at the end of the film: two military contract firms are thanked – Inmarsat and MBDA Missile Systems – and Military Film Services (MFS) are listed as having provided ‘Specialist Advisors’.  MFS are a relatively new company, formed in September 2011 but they’ve already amassed a good number of credits – Edge of Tomorrow, World War Z, Kick Ass 2, I Am Soldier, Kingsman: The Secret Service, 24, Our Kind Of Traitor, The Interceptor and others.

Exactly what role MFS performed on Kingsman is not clear.  According to their IMDB page they mostly provide extras casting and Kingsman is the only film crediting MFS with providing ‘specialist advisors’.  Some other credits use the more familiar term ‘technical advisors’ so presumably there is some distinction.  The producers of Kingsman said in a testimonial for their site, ‘MFS provided an excellent service. The military know how and the discipline of the men helped create a great sequence. They coped with all our demands and late changes with efficiency and good humour. A much needed resource for the British Film Industry.’

We might well ask – given that the MOD have outsourced their locations management and licensing process to Landmarc, a private company, do they also outsource their military technical advisor process to companies like MFS?  There is some crossover between the two companies – both worked on 24: Live Another Day, Edge of Tomorrow, Mission: Impossible – Rogue Nation and Kingsman which is most of the big projects MFS have worked on in the few years they’ve been in business.  Are these the early signs of the MOD trying to replicate the influence the DOD has on the entertainment industry, but using private companies as proxies?

The involvement of the Met Police in helping to make Kingsman was relatively obvious, their police station appears in the film as a key setting for Eggsy’s recruitment into the secret society.  They weren’t credited, but they never tried to deny their involvement in my email exchanges with them.  However, the involvement of the MOD – via Landmarc – was not apparent and went completely uncredited.  The exact role of MFS is not clear, let alone Inmarsat and MBDA (likely providing props for the missile-satellite sequence) and there is yet another ex-British military advisor called Paul Biddiss who is not credited on Kingsman’s IMDB page or at the end of the movie.  At every stage the state’s involvement, or potential involvement, has been shrouded in secrecy, so putting the tin foil hat on for a moment, who else might have been involved in this film?  MI5?

Similarly, with all these people and organisations working to help the film did they play a role in encouraging the ultra-violence and eugenicist philosophy?  It is clear that at least they had no objection to this being the tone, nature and content of the film because they all happily went along and did their bit.  And perhaps this is the more important question – given that all of these organisations have the option of not providing assistance to such a film, should the public institutions or quasi-public institutions still provide that help?  This is not a question with a democratic answer because 95% of people have no idea that this is even going on, but given the presence of these same debasing cultural traits and elitist underlying ideas in much US government-sponsored film and TV, it is a question worth posing.

You can download the MOD’s database of entertainment productions granted licences to film on MOD property here (PDF).  I have also put together a file containing the original .xls database files sent from Landmarc via the MOD in response to my FOIA request, and the Landmarc website documents on requesting permission to film on MOD land here (ZIP).