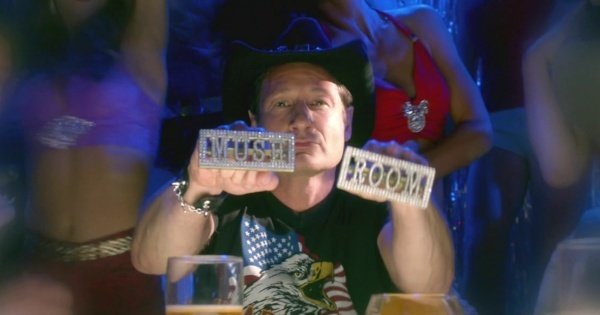 The latest X-Files episode – Babylon – sees both wings of the conspiracy culture united in one easy-to-digest dose.  Both the emerging Neo-Nazi front that is widespread but particularly vicious within the conspiracy world and the lefty hippy crowd who want to take drugs and try to levitate the Pentagon are given strong reassurances and affirmations.  This is against a backdrop of a strong reassertion of the War on Terror, something that the conspiracy culture remains sceptical of but is over time coming to accept and sometimes even promote.

Act One: The Suicide Bombing

Babylon opens with a by-the-books token Muslim suicide bomber sequence where a guy does some praying, a suitable amount of Allah Akbar-ing and then meets up with another guy and they go and blow up an art gallery.  The horror is really rammed home by the depiction of people who are on fire from head to toe running out of the gallery. How explosives set people on fire without injuring their limbs, and how people who are completely on fire manage to run around screaming is not something I can explain.  This is so unrealistic, in a show that has otherwise prided itself on realistic SFX in this mini-season, that it can only have been added for emotive reasons. The set up from this is that two young agents who bear a curious resemblance to our protagonists Mulder and Scully arrive in their basement office seeking help.  One of those pesky Arabs has only gone and survived and is in a vegetative state, and they need a reputable psychic to go into his mind and find out where his fellow pesky Muslim suicide bombers are hanging out. Apparently they’re all pissed off because someone painted an offensive picture of Mohammed.  And this is taking place in Texas, the real life scene of a highly dubious shooting incident last year at an art gallery that was hosting an exhibition of inflammatory art with the sole purpose of trying to provoke this sort of reaction. Don’t I know you from somewhere?

Scully pairs off with Miller to go to Texas to try an electroencephalogram on the terrorist in a coma, who appears to have suffered no burns at all.  However, they are interrupted by an FBI fascist nancy who tells them the hospital has been threatened and they need to leave.  He declares that the threat must have come from a ‘large unassimilated Muslim community in the area with one shared wish – to wipe America off the map’.  Scully’s pushback against this is the weakest of the lamest of the tedious – ‘Not all Muslims are extremists’.  Well done Dana, that’s really going to bring him around.

Meanwhile Mulder persuades the young redhead sceptic who instantly dislikes him (but obviously fancies him) to give him magic mushrooms so he can try some sort of Vulcan mind-meld with our nearly dead terrorist. So all four end up in the hospital in Texas trying to communicate with what is little more than a corpse while the hospital is being evacuated due to bomb threats.  In the confusion a nurse attempts to kill the terrorist by switching off his life support, but this fails because she is interrupted by Mulder and Einstein arriving on the scene.

The nurse then launches into a tirade about the terrorist not deserving life support, and how the ‘immigrant groups are coming over here and taking all our jobs and clogging up the healthcare system and the schools, and they don’t even speak English’.  Again, the pushback is minimal, ‘we’re not going to fix that right now’ so the nurse moves on to complaining about refugees and how her tax dollars pay for them.  Then, in one of the clearest endorsement of a popular current conspiracy theory so far in this season, the nurse jumps on the Neo-Nazi bandwagon. Before we can dwell on why this overt and obvious promotion of popular far Right conspiracy theory has been written into this show about UFOs we cut to Mulder, now tripping his tits off on psilocybin and rocking the house down. Though it later emerges that Mulder was given a placebo and manages to experience extensive hallucinations due to the power of suggestion, he does manage to crack the case.  In one of his visions the dying terrorist tells him the name of the hotel – Babylon, the title of the episode – where his jihadi friends are sitting around planning mass murder.  The evil terrorists are taken down without further incident and everyone goes home happy.

We are given two important lessons by this episode, if by ‘we’ we mean conspiracy theorists:

1 – Contrary to Richard Ashcroft’s musings, the drugs do work and can give you magical mental powers that help you catch major criminals.

2 – The Muslims really are out to get you, and the real plot behind the War on Terror is not the Wars or the Terror, but a plot to use refugees to destroy America/Europe.

Thus, both the Left wing of the conspiracy movement who believe DMT is spirit medicine that enables them to fight the New World Order by vibrating at a higher frequency and the Right wing who believe that all Muslims are dimwit savages being used by the elite to replace white people and destroy Western civilisation are given encouragement by this episode.  In the end the nurse who tries to kill a near-dead terrorist is not punished and Mulder saves the day by dropping a couple of pills and tripping the night away.

Indeed, these two wings of the conspiracy movement have been merging for some time.  David Icke, the patron saint of the ‘get high and fight the elite at the same time’ subculture, has for some time endorsed the idea that the ‘refugee crisis’ is a plot by the Rothschilds and other ‘reptilians’ (Jews) to eradicate Europeans or some other distracting fantasy.  This is a man who has barely if ever mentioned using drones to kill people, or the death toll in Iraq, Afghanistan and elsewhere.  Those lives don’t matter to him, because those people don’t buy his books or pay subscriptions or go to cult concerts at Wembley or donate to the biggest sham in alt media history.

As such, I don’t think the purpose of this episode is to help these two wings merge, but to speak to the fact that they are merging.  And I mean ‘speak to’ both in the sense of commenting on something and communicating with something.  It is yet another affirmation of conspiracy theories and thinking and yet further confirmation of the fact that the main aim of this mini-season (aside from making some very fun TV, which it certainly is) is to say something about or to the conspiracy culture.

The new season of The X-Files concludes next week and I will write a final article and hopefully also do an episode of ClandesTime devoted to this season and some reflections on it.