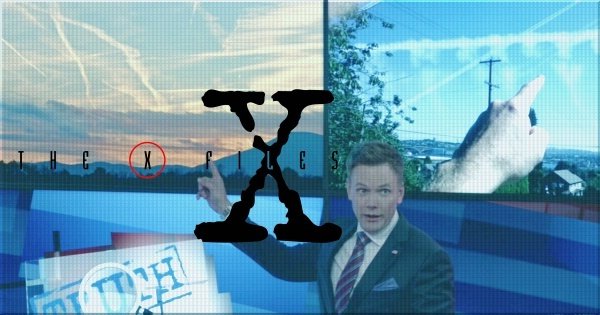 The X-Files Finale: Livin’ in an Anti-Vaxxer’s Paradise

The finale to season 10 of The X-Files – My Struggle II – saw the welcome return of Tad O’Malley and the unwelcome return of all the baggage that goes with that.  For anti-vaccination conspiracy theorists it is a huge affirmation of their worst nightmares and for most other people it was a tedious, over-written under-executed anticlimactic denouement to an otherwise quite well produced mini-series.

This is the End, Beautiful Friend

After Scully recaps her whole backstory in a slick montage echoing the opening of season 10 we get the title sequence, where the usual caption ‘The Truth Is Out There’ has been replaced by ‘This is the End’.  Instantly we know that this episode is going to be different.  What we get is Scully in a pants suit somewhat reminiscent of Carrie in Homeland, discovering a gigantic conspiracy to try to wipe out most of the human population with a man-made mega-virus.  In order to save the world Scully teams up with her younger lookalike Agent Einstein.  In turn, Einstein looks quite a bit like Maya in Zero Dark Thirty.

While all the real work is being done by women who will probably never get the credit, this episode also sees the resurrection of Tad O’Malley, the internet TV conspiracy theorist.  He senses an opportunity to leverage the impending apocalypse for attention and profit, and steps back out from the shadows in spectacular fashion.  He claims that the alien DNA has been put into everyone, or at least everyone in America (because O’Malley like all hardcore conservatives can’t see past the end of his own cock). Apparently this is all part of the well-worn mass depopulation conspiracy. The person who positioned that microphone there should be fired

Mulder’s junior lookalike Miller shows this to Scully and asks if it is plausible, receiving the reply ‘it’s all too plausible’.  However, it turns out that O’Malley is wrong – most people haven’t had alien DNA injected into them, the alien DNA is in fact the only way to resist a virus that decimates the human immune system.  More on that in a moment.

While Scully and Einstein waste time figuring out the world’s most predictable plot twist, Mulder is attacked by a goon working for the cigarette smoking man.  Mulder opens up a can of whoop-ass reminiscent of Jason Bourne and gets suplexed for his troubles. Mulder inevitably comes out on top and this takes him to the cigarette smoking man, who is at or near the top of the conspiracy to kill almost everyone on earth.  Just as Scully is being told that she is protected because she has some alien DNA, Mulder is offered a chance to survive by the would-be king of the new world.  The dialogue is littered with the usual stuff about humanity inevitably destroying itself, global warming necessitating a massive cull of human population, how ‘everyone dies in the end’ anyway.  Mulder rejects this view, refusing the offer to initiate him into the tiny minority of survivors.

Meanwhile O’Malley continues to pump out (sic) the ‘blame the chemtrails’ propaganda, which again is wrong.  It appears that his purpose in this episode is to give credence to a variety of massive technologically advanced conspiracy theories, none of which are actually born out by the facts (within the reality of the show, I mean).  The general direction of his reporting is proven true – there is a massive technologically advanced conspiracy entering into its brutal final stages – but the specifics of his reporting are always wrong.  So this is a mockery and a vindication of conspiracy theory at the same time.

Back at chateau de smoking man, Miller turns up to rescue Mulder who by now is looking somewhat worse for wear.  They are interrupted by the cigarette smoking man who is looking an awful lot like David Rockefeller. This is why conspiracy theorists don’t believe in coincidences

Scully and Einstein work feverishly to figure out how to locate Scully’s alien DNA and amplify it to create some sort of antidote.  By now it has been explained that the virus was given to people through the smallpox vaccine and that it disables the immune system leaving people vulnerable to the slightest infection.  So, while O’Malley gets it wrong every time, the eventual explanation does involve the nefarious use of vaccines.  Score one for the anti-vaxxers.

However, the answer to the virus is, of course, a vaccine.  After creating the vaccine and saving the world (at least for the moment) Scully races against time to find Mulder and Miller to save them too.  Despite the worst traffic jams since Contagion she locates them relatively easily but after taking one quick glance at Mulder she offers the considered medical opinion that her vaccine isn’t enough, it’s too late.  Presumably this means that it is also too late for all the people we see throughout the episode who were seriously unwell hours or days ago.  But fuck them, they wouldn’t have got sick if they hadn’t wanted to protect themselves against smallpox.  Score two for the anti-vaxxers.

Scully continues her wildly speculative diagnosis declaring that to save Mulder they need stem cells from her son William.  She admits that she doesn’t know where he is or how to find him, but still seems unwilling to at least give the vaccine a go in the meantime, just on the off chance that it saves Mulder’s life.  Score three for the anti-vaxxers.  At the final moment, as she ponders how to find William to extract stem cells (presumably in itself a difficult and time consuming procedure), the UFO we saw assassinating Sveta back in episode one re-appears and hovers over a road full of people thus confirming once and for all the existence of such craft.  Score one (another one) for the UFOlogists. For some reason I really want a Toblerone

What Was the Purpose of The X-Files Season 10?

This is not an easy question to answer.  While the show does ridiculous and mock conspiracy theories it is usually quite kind to conspiracy theorists themselves, and does affirm or encourage a wide variety of theories.  On balance, it is probably more pro-conspiracy theory than anti-conspiracy theory.  The rushed nature of the final episode, which was far too brief to carry the weight of its all-encompassing apocalyptic storyline, suggests both a desperate attempt to get another full series commissioned. It also smacks of an attempt to return to the large-scale conspiracy theory of the opening episode of the show, which managed to link together most of the entire conspiracist mythology in one go – from HAARP and chemtrails to UFOS to false flag terrorism.

This clip has since done the round on social media, gaining hundreds of thousands if not millions of hits.  It is mostly seen by conspiracy theorists as a vindication, as truth on TV, or as an attempt to put people off conspiracy theories by trivialising them.  As I observed in the first article in this review series, in reality it is more likely to encourage than discourage this sort of thinking.  After all, what is attractive, psychologically speaking, about conspiracy theories is their apparent ability to explain any event or sequence of events simply by ascribing secret human motive to fill in any gaps.  Absence of evidence isn’t evidence of absence, but in fact is proof of a cover-up.  It is beautifully circular and thus psychologically very reassuring.

However, it is also unfalsifiable and illogical.  Not that this particularly matters, as most people’s beliefs about most things beyond the immediate demands of their own lives are unfalsifiable and illogical.  Indeed, it is TV shows like The X-Files that allow and enable them to fill in some of the blanks.  But most people at least believe that their beliefs about the world make them happy and are shared by many of the people around them.  Conspiracy theorists, by contrast, believe themselves to be social misfits or outcasts, all because they believe and want to talk about the truth.

As such, they are in a psychologically more vulnerable position, in many ways more easily led than the ‘sheeple’ they mock so readily.  Whether this was the intention or not, this new season of The X-Files has shown that.  Just by string together a few conspiracy buzzwords into an incoherent but passionately-expressed grand narrative hundreds of thousands if not millions of conspiracy theorists felt reassured and exonerated by episode 1.  While the far-reaching scenario of the season finale might have been too much for them it will still have hit enough key points (imminent collapse, vaccine conspiracy, Rockefeller lookalike) that they will not be able to resist tuning in for the next episodes, whenever they may be.