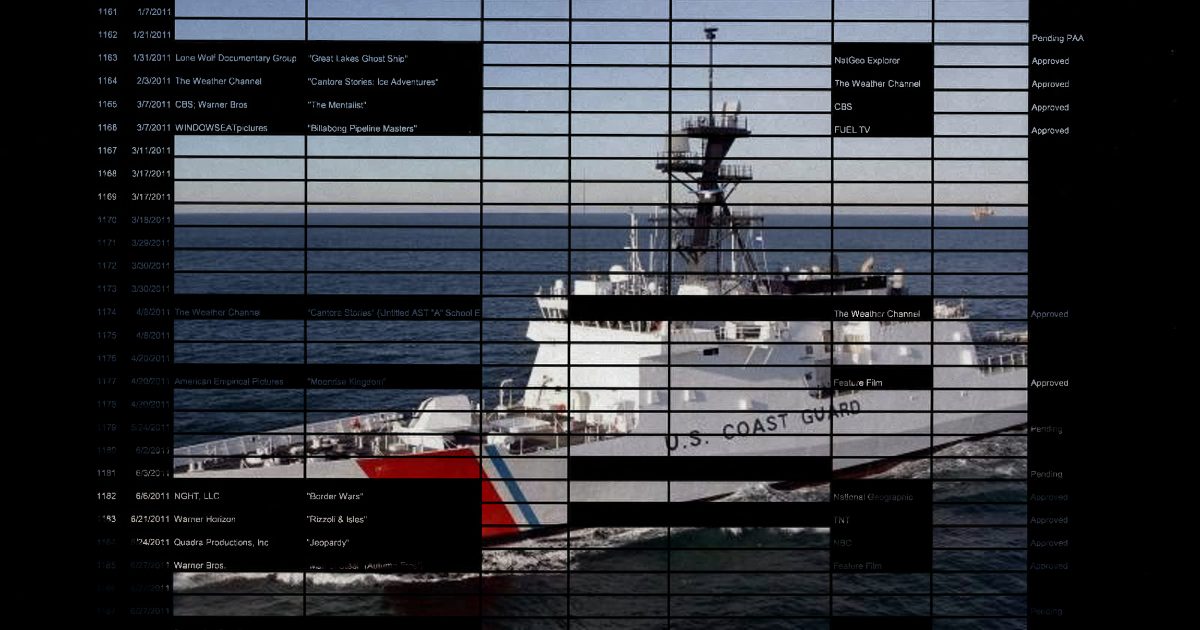 In March 2016 I put in a FOIA request with the US Coast Guard.  Several appeals, a lot of ignored emails and well over three years later they finally released just 20 pages of documents on the activities of their entertainment liaison office.  I thought the CIA’s FOIA office was bad, but this is perhaps the worst FOIA experience I’ve ever had with the US government.

You might think the Coast Guard are a noble agency who just rescue people who are stranded out at sea, and suchlike.  Inasmuch as they do things like that, I’m all for it.  But the reality is that the Coast Guard are part of the Department of Homeland Security, and can be militarised in a time of war as part of the Department of Defense.  They regularly take part in mutual operations with the US Navy, ICE, and the DEA and thus are just as much a part of the US security state as those agencies.

Indeed, their entertainment liaison office was, for a long time, right next door to the DOD’s offices at 10880 Wilshire Blvd, Los Angeles.  So in early 2016 I put in a request looking for reports from their ELO, just as I had previously done with the Army, Air Force and so on.

I won’t get into all the administrative details but the crux of it is that the Coast Guard took until the summer of 2018 to formally respond to my request, and ignored literally dozens of emails requesting an update and a completion date for my request, which they are obliged by law to provide.  They ruled that they could not release even a single page of responsive records.

So I appealed this ruling and in November 2018 my request was remanded back to the Coast Guard to be processed again.  I regularly sent Commander Timothy Balunis (who was handling my request) emails asking for updates and a completion date, most of which were ignored completed, again contrary to their legal obligations.

When they finally responded to my request they said they were only provided 19 pages.  Which proves they can’t count, because they sent me 20 pages.

Which weren’t the documents I asked for.

And which they previously denied existed, saying they only had records going back to 2014 when the released documents go back to 2011.

In short, they lied, obfuscated, avoided their legal obligations, lied some more and then screwed the pooch.  Three and a half years to release 20 pages of documents, which are heavily redacted, is little short of a joke.  The delays, avoidance tactics and lies tell me that they found a lot more material (likely including ELO reports similar to the Navy’s and others) but have tried to withhold it from public view.

So naturally, I filed another appeal against this determination.  And was promptly told that they could not accept my appeal because more than 90 days had elapsed since the summer 2018 determination.  When I pointed out that I wasn’t appealing their summer 2018 response, but their autumn 2019 response, and that I’d made this abundantly clear, they had no choice but to acknowledge my appeal.  We’ll see what happens next.

So what’s in the released documents?

The documents are essentially logs of entertainment projects where the Coast Guard were asked for support – little more than lists of requests and information on whether the request was accepted or rejected.  Nonetheless the logs show that the Coast Guard is one of the more active DHS components when it comes to liaising with Hollywood.

They worked on major films like Man of Steel and Alvin 3: Chipwrecked!, popular TV dramas like Hawaii Five-0, NCIS and Magnum PI, they had some involvement with the Robert Redford movie The Company You Keep, as well as more obvious reality shows like America’s Most Wanted and Border Wars.  They also worked on less obvious productions like Burn Notice and A Conspiracy on Jekyll Island (released as The Crash in 2017).

Indeed, it’s their collaboration with US military and intelligence agencies on productions like Jack Ryan, The Rock’s Rock the Troops event and the NCIS franchise that reveals just how close the Coast Guard are to the more obvious examples of the US security state.  There is a fair amount of crossover in the work of the different ELOs, so despite the Coast Guard’s best attempts at a prolonged cover-up, these documents do provide some useful and informative details.

Naturally, I will endeavour to get more substantive material from them as time goes on.