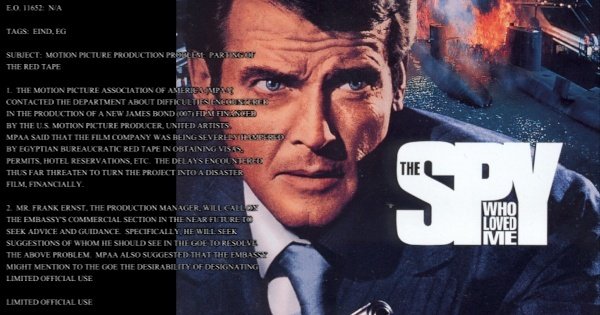 US Embassy Cables on James Bond and Ian Fleming

While searching around the US National Archives digital collections I came across a total of 20 US embassy cables from the 1970s that mention James Bond and Ian Fleming.  Most of them are records of ongoing covert affairs across the world that simply liken what’s going to ‘a James Bond adventure’ or ‘the stuff of Ian Fleming’.  While those cables are interesting in that they detail all kinds of nefarious activity from spying to arms smuggling to the CIA’s public image in Japan, there are five cables out of the 20 that deserve close attention.

The first is from August 1973 sent from the American embassy in Dublin to Washington, London and Belfast.  It describes the case of the Littlejohn brothers.  The cable reads:

Lead news item in Dublin papers past few days has been trail and conviction of two English brothers, Kenneth and Keith Littlejohn. They drew sentences of 20 and 15 years for robbing 67,000 pounds from Dublin bank. English authorities appear to have been extremely cooperative. British police had warned Irish counterparts that Littlejohns needed to be watched. Then, after robbery, British extradited brothers to Ireland. During Dublin trial, however, brothers claimed they had been working for British intelligence with object of infiltrating IRA and carrying out actions that would discredit it–such as robbing banks. Two disclosures gave substance to some of claims. First, it turned out that a ranking official at British ministry of defense has granted an interview to one of Littlejohn brothers. Second, British asked Irish to hold trial “in camera,” excluding press and public (GoI refused).

After noting the British official denial, the cable goes on to observe that:

British statement has not satisfied newspapers, who think they detect public demand for more info and more action by Irish govt. Most serious line of speculation is that British agents may have been responsible for Dublin bombings of last December, which have never been solved. Proponents argue that explosions were well timed to benefit British and damage IRA, which is true enough. So far, this line is apparently being pushed only by extremists, such as deputy Neil Blaney and IRA. There may be some impact on Irish public, however,which has been amply exposed to James Bond movies. Even serious journalists are noting that three British agents (Littlejohns and Wyman) have been discovered and asking how many more are still operating.

So in the midst of this story about intelligence collusion in Northern Ireland during ‘The Troubles’ comes the idea that the James Bond movies have given the Irish public the view that this is exactly the sort of thing British intelligence are doing.

Along similar lines is the second document, from May 1974 sent from the American Embassy in Vientiane (the capital of Laos) to Washington, Saigon, Bangkok and Phnom Penh.  It describes a meeting between the US ambassador to Laos and the Prime Minister Souvanna Phouma.  The final paragraph says:

Comment: the Prime Minister appeared to me to be relieved by the fact that he had skated through the constitutional dilemma with regard to the assembly and as is his wont, he was exuding confidence regarding the good-will of the Pathet Lao and a sense of optimism regarding the likelihood of true reconciliation in the very near future. State 094148 was received after the foregoing was drafted but I am having the Prime Minister for dinner and to see a James Bond movie on May 10. At that time and inspired by 007 he may be willing to discuss coming down hard on the NVA issue.

Not just the Irish public, but also the Prime Minister of Laos were believed or expected to have their perceptions of the world shaped by the James Bond films.  Weaponised fiction indeed.

The third document very much illustrates the degree to which government agents are involved in this sort of filmmaking.  In September 1976 the James Bond film The Spy Who Loved Me ran into production difficulties in Egypt.  The Secretary of State sent a priority cable to the American embassy in Cairo demanding they assist the producers of the film:

1. The Motion Picture Association of America (MPAA) contacted the department about difficulties encountered in the production of a new James Bond (007) film financed by the U.S. Motion picture producer, United Artists. MPAA said that the film company was being severely hampered By Egyptian bureaucratic red tape in obtaining visas, permits, hotel reservations, etc. The delays encountered thus far threaten to turn the project into a disaster film, financially.

2. Mr. Frank Ernst, the production manager, will call on the embassy’s commercial section in the near future to seek advice and guidance. Specifically, he will seek suggestions of whom he should see in the goe to resolve the above problem. MPAA also suggested that the embassy might mention to the GoE the desirability of designating a specific official to expedite the granting of the required documents.

3. Action requested: given the fame of 007, news that he had been stopped by the Egyptian bureaucracy could cause headlines world-wide and discourage future movie production in Egypt. Such production obviously would be an important source of foreign exchange for Egypt. It would as well be a financial catastrophe for United Artists. The embassy is therefore requested to render appropriate assistance to Mr. Ernst. It would be particularly helpful if the embassy could arrange appointments with the appropriate GoE official or officials.

Two other documents also mention the film upon its European release – The Spy Who Loved Me was noted in Cultural Surveys from October 1977 sent from both Vienna and Munich.  These cultural surveys are a form of open source intelligence gathering, presumably carried out by the local CIA agents under official cover in the embassies.  From using the films to try to persuade the Prime Minister of Laos to crack down on the North Vietnamese, to helping United Artists make a Bond movie in Egypt, to monitoring the release of the films for intelligence purposes – it seems the influence of the entire James Bond product on the US diplomatic machinery is considerable.

You can download the whole batch of 20 cables in one .rar file here.