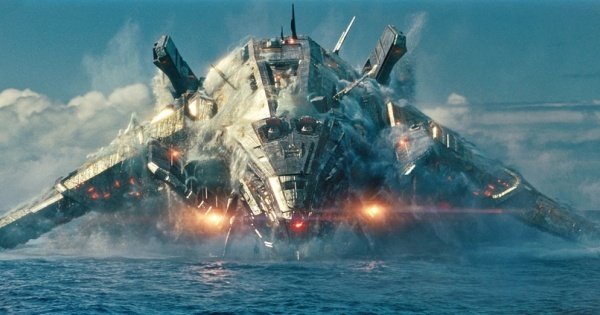 US Navy documents on movie Battleship

The 2012 movie Battleship is a shameless rip-off of the recently reworked Transformers film franchise and like the Transformers films it had assistance from the US military.  Documents from the US Navy detail the co-operation granted to the filmmakers in the form of an email discussing why and how co-operation was granted, and a lengthy contractual agreement between the US Navy and the producers.

The email notes how, ‘BATTLESHIP was made with the support of the Department of Defense and the Navy. As you know, we ask ourselves some key questions before supporting a major motion picture. First, does the script accurately portray the Navy? Second, does it positively represent our service and our Sailors? Third, can we support a film without impacting our operations? And finally, do we believe that it could have a positive impact on recruiting? In the case of BATTLESHIP, we felt the answer was “Yes” to each of those questions.’

Given that this is a film about giant robotic aliens landing in the Pacific and fighting the US and Japanese navy I do wonder exactly how accurate the script was in its portrayal of the US Navy’s activities, but the email emphasises how, ‘it’s in our best interest to engage and make sure that movies like Battleship accurately portray who we are and what we do as a Navy’ and that, ‘The end result is a film that provides movie-goers with a realistic look of the Navy and our Sailors operating at sea’.  Special pre-release screenings of the film for ‘Sailors and their families’ were arranged across the United States, including one on board the USS Missouri (which had featured in the film).

One paragraph in the contractual agreement is worthy of particular attention:

17. The production company agrees to provide a minimum of ten (10) DVDcopies of the Picture solely for use in internal briefings and for historical purposes. The DVD copies of the Picture shall be provided to DoD at such time, if ever, as the Picture is offered for sale to the general public in the United States on OVD and shall be subject to DoD’s execution of Universal Pictures’ standard agreement limiting DoD’s use of such OVD copies to internal use only.

This treatment of DVDs as though they were classified documents is quite absurd.  The commercial impact of 10 DVDs being leaked to the general public is negligible.

Perhaps the most suspicious aspect of this is that much of the filming allowed by the US Navy took place during the Pacific fleet’s 2010 RIMPAC training exercise.  In the film, the alien attack takes place during just such a training exercise, evoking the like-for-like training exercises being run by the US military in the run-up to the 9/11 attacks, and to some extent on the very morning of the attacks.  That this was not only the storyline in the film but also the reality on the ground shows how these exercises – and the conspiracy theories that follow them around – can be used by the security state as part of their smoke-and-mirror campaigns.

You can download the Navy documents on Battleship here.