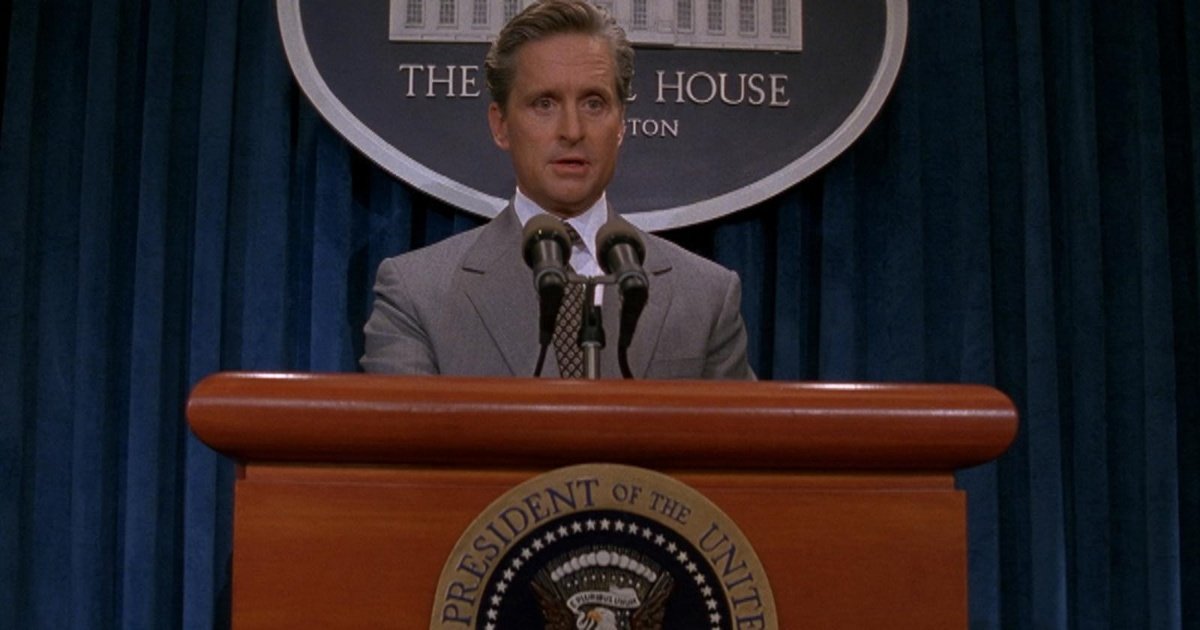 US Navy teaches politics to officers using The American President

A recently-released syllabus for the US Naval Academy’s course FP130: American Government and Constitutional Development includes a section that advises students to watch and learn from the 1995 romantic comedy The American President.  Bizarrely, the scene does not involve the military or foreign or security policy in any way, but is about the President trying to buy flowers for his new girlfriend.

This is not the first time this film has made a bizarre incursion into the real world.  During the 2016 Republican primary during a spat between Ted Cruz and Donald Trump, Cruz quoted – word for word – dialogue from The American President in a TV interview.

Ironically, the President in the film is hyper-liberal whereas Cruz was at the opposite end of the spectrum – both politically and in other respects.  Nonetheless it is surprising that Cruz remembered this film so vividly, not only given its political viewpoint but also given how it veers from charming and intelligent to corny schlock from each moment to the next.  While it does have some very funny Sorkin-ist humour its emotional core is quite weak.  Exactly why Cruz would have watched this film for inspiration – as it appears he did – no one knows.

The Politics of The American President

The US Naval Academy’s Political Science department recently released a master syllabus for their course on American Government and Constitutional Development, which includes most of what you’d expect.  However, under Topic 6: The Presidency, the suggested reading and viewing materials include two scenes from The American President.  Note: not the entire film, which includes a scene where the President reflects on giving the order for a bombing mission that he knows will kill civilians.

However, this critical reflection on US military power is limited solely to the President himself – the military are portrayed very well, albeit in secondary roles.  The DOD did support the film, with their database recording how:

From this it seems the producers asked the military to help ensure that the military portrayals were ‘reasonably positive’, rather than this being at the insistence of the DOD, as per usual.  This may have been a response to the problems on Aaron Sorkin and Rob Reiner’s previous film A Few Good Men, where the database records:

INACCURATE, NEGATIVE PORTRAYALS OF MARINES. PRODUCER/WRITER DID MAKE SOME SCRIPT CHANGES, SO WE LET THEM USE NAS PT MUGU FOR A MINOR SCENE. PROBLEM CENTERED ON DECORATED, SENIOR MARINE COMMANDING OFFICER WHOSE INAPPROPRIATE LEADERSHIP STYLE RESULTED IN THE DEATH OF AN UNPOPULAR MARINE ENLISTED MAN. THE CO THEN TRIES TO COVER UP THE INCIDENT. BASED ON A TRUE STORY, BUT FULL OF INACCURACIES IN THE DRAMATIZED VERSION. (FILE IN GEORGETOWN LIBRARY)

The Navy’s choice of scenes from The American President is particularly weird because it has nothing to do with the military and very little to do with the President or constitutional government.  Indeed, it appears to have been included simply because the course directors liked the film.  The clip they chose shows the President – Michael Douglas – trying to order flowers for his new girlfriend – a lobbyist played by Annette Bening.  The following scene shows Bening getting chewed out by her boss and receiving a gift from the President while at work.

“The American President” is a 1996 Universal Studios movie in which a widowed President (Michael Douglas) begins dating a lobbyist (Annette Bening). The story is about the problems that then ensue from their relationship. In this clip his staff is managing the President. (Michael J. Fox for one) He wants the telephone number of a florist to send flowers to Bening and the staff is perplexed by such a pedestrian request for information. The clip shows some of the trappings of the presidency and how isolated presidents can be from normal day-to-day life. For example, the President does not know how to work the telephone system in the White House or where his credit cards are located to purchase something. The clip then switches to Annette Bening as a lobbyist. Here her boss warns of the fallout of a personal association with the president. He talks about the role of lobbyists in the system and how her personal life will interfere with her professional responsibilities.

Usage for class: This light-hearted and funny clip illustrates some of the trappings of the president, the power of staff and their concern to protect the president, and lobbyists and their role in the political process. It could be used to spark interest of serious topics with a fun and funny segment.

In other words: this has nothing to do with political science, or presidential government, or the constitution.  They just like this bit of the movie so they wanted an excuse to show it in class.