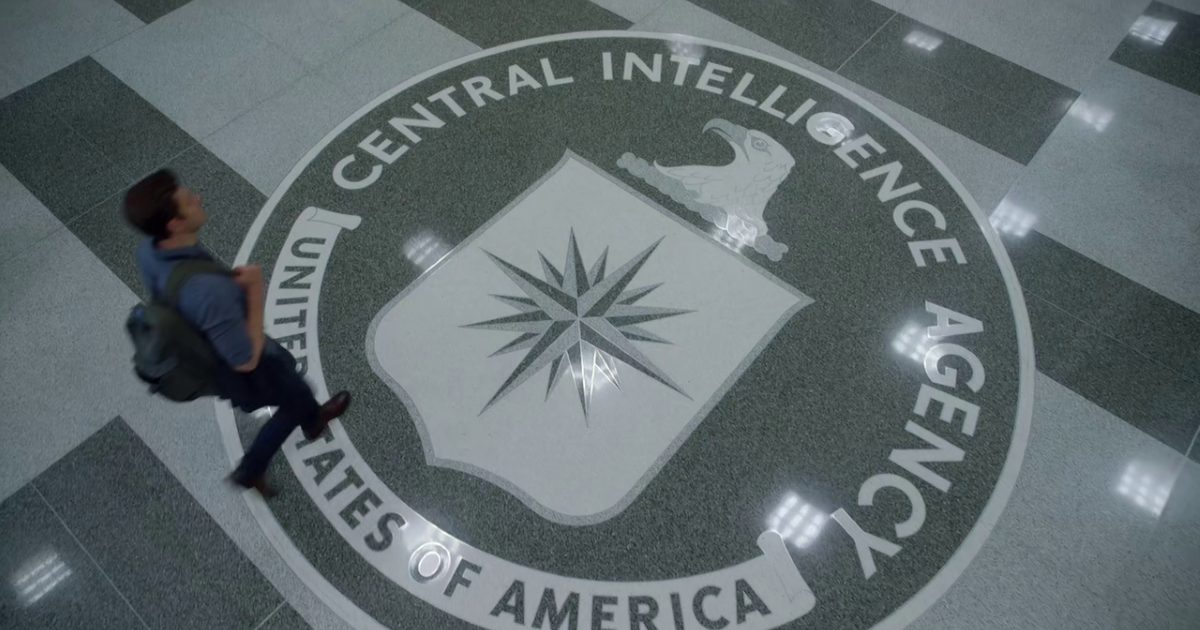 Jack Ryan, the CIA and Venezuela

A video essay presenting my breakdown of Amazon’s Jack Ryan, including how the CIA, DOD and other US government agencies were involved in producing it.  I outline some of the history between the government and Tom Clancy productions before breaking down how seasons 1 and 2 are propaganda for US foreign policy. I discuss how season 1 functions as propaganda for the global war on terror, while season 2 promotes a US coup or war in Venezuela.

Amazon’s Jack Ryan is the CIA’s newest entertainment-propaganda vehicle. John Krasinski went to CIA headquarters to help prepare him for the role.

But Jack Ryan is simply the latest example of the long-term relationship between Tom Clancy productions and the US government.

Chapter 1: Tom Clancy Films and the US Government

Tom Clancy was friendly with the US military and intelligence agencies, and following the success of his debut novel The Hunt for Red October he was invited to speak at the CIA, FBI and NSA, and went on tours of military bases.

Clancy even sent a copy of the manuscript for The Cardinal of the Kremlin – his book about the CIA’s support for the mujahideen during the Soviet-Afghan war – to the Agency’s Office of Public Affairs. Letters obtained from the CIA show that he asked them to review the book for ‘security considerations’ and admitted he had deliberately portrayed CIA operations in an unrealistic way. Clancy also said that his publisher was not aware of him doing this, and asked the CIA to keep it hush-hush.

When it came to the movie adaptations the first four films were all supported by the Pentagon, in return for the scripts being rewritten to fit the military’s agenda. In Hunt for Red October this meant making changes to Sean Connery’s backstory and the reasons for his defection, including the Soviets’ distrust of Lithuanians.

Patriot Games was also supported by the CIA, who allowed the film-makers to shoot at their headquarters in Virginia because they felt the film would portray them positively.

While the CIA offered no support to Clear and Present Danger, military files show that they were involved in the months of script negotiations between the producers and the Pentagon. They also sent CIA officers to a preview screening at the Kennedy Center.

Both the Pentagon and CIA supported The Sum of All Fears, with CIA Hollywood liaison Chase Brandon working as an on-set advisor, and real-life Marines appearing in the helicopter rescue scene.

The only Jack Ryan film that wasn’t supported by the US government was Shadow Recruit, which was rejected by both the FBI and CIA.

However, the CIA did meet with the developers of the game Ghost Recon: Wildlands and asked that they avoid stereotypes of female CIA officers when sketching out their characters. The game – much like the film Clear and Present Danger – centres on black operations against a South American drug cartel, but it emerges that the bombing of a US embassy that provoked the operations was a false flag, carried out by a deep-cover DEA agent.

Chapter 2: Amazon’s Jack Ryan and the US Government

When it came to Amazon’s Jack Ryan, the Pentagon rejected the producers requests for assistance.

Phil Strub reviewed the initial scripts and felt it was ‘very well written’ but ‘hopeless for DOD’. This is probably because the opening episodes show the US military defending a CIA black site where they torture terror suspects, paying local jihadis in Yemen for the dead bodies of victims of drone strikes, and a traumatised drone pilot gambling and cavorting with a married couple in Las Vegas.

But the Coast Guard – part of the Department of Homeland Security – did support the series.

The CIA distanced themselves from the show with a credit at the end of each episode saying they did not endorse its content. But they allowed the creators and stars to visit CIA headquarters, and ultimately granted them permission to film there. Ryan is seen arriving, going through the doors and walking over the CIA seal – exactly the same as in Patriot Games, Argo and other CIA-supported productions.

The CIA’s full cooperation helped add to the show’s authenticity, but it also turned it into a piece of PR for the Agency, resulting in Krasinski and others extolling the virtues of the CIA in numerous interviews.

Chapter 3: Season One of Jack Ryan

Despite the military refusing to provide production support to the first season of Jack Ryan, they did help promote it. The first season premiere was a USO event, hosted on a retired Navy battleship and attended by military personnel.

While Cuse claims that the show is apolitical, he also admitted that their aim was to glamourise the people working for the CIA and the Pentagon.

The show is a piece of PR for the CIA, but it goes much further than that. The first season continues the tradition of other CIA-sponsored TV shows like 24 and Homeland, in perpetuating the myth of a highly sophisticated, technologically advanced terror threat. The story centres around a former ISIS member who carries out a string of extremely well planned and deadly terrorist attacks, and how Jack Ryan and Jim Greer stop him.

We see our protagonist evolve from a nerdy guy who uses his CIA computer to stalk women via the internet, into a crack field agent who kills terrorists, rescues refugees and mansplains the correct terms for CIA employees.

Cuse claimed that the show didn’t demonise Muslims, because they show a variety of Muslim characters (including Ryan’s boss, Greer).

Early on, we learn that Jack is a former Marine who became a CIA analyst, and that his entire unit was killed in a helicopter crash in Afghanistan. In one of the final episodes of season 1 it is revealed that a small child used a grenade to suicide-bomb the helicopter, and we’re given no explanation as to why.

Even young children are shown to be a threat, as long as they are Muslims with brown skin.

Everywhere from Yemen to France to Syria is shown as a hotbed of Islamic terror, while the CIA are portrayed as the noble line of defence against a ruthless and lethal enemy.

Chapter 4: Amazon’s Jack Ryan and the US Govt (Part II)

As part of the promotion for season 2, John Krasinski and Michael Kelly went on a USO tour of European military bases. At a private screening on a US Air Force Base in England, attended by military and intelligence personnel, Krasinski let slip how deeply the CIA were involved in the show.

When trailers for the new season were released, this led to criticism from journalists and commentators, including Venezuela’s minister of culture. Before the show even came out it was being accused of being propaganda for a US coup or war in Venezuela.

This led to Krasinski denying that the show is about the political situation in Venezuela, even though social media promotions included fake election adverts for two Venezuelan politicians who feature heavily in season 2.

The second season of Jack Ryan doubles down on the first, evolving from PR for the war on terror into smart, sophisticated propaganda.

The series revolves around a convoluted global conspiracy involving the president of Venezuela, Nicolas Reyes, an obvious substitute for real life president Nicolas Maduro. Reyes is shown to be a ruthless dictator who kidnaps dissidents, suppresses protestors and murders his own general because he doesn’t trust him. The country is said to be on the verge of collapse, entirely in keeping with US rhetoric on Venezuela.

Jack Ryan, Jim Greer and Mike November set about trying to overthrow Reyes and his corrupt, inhumane regime. This includes helping his political opponent, Gloria Bonalde, win the election. Bonalde is depicted as a left-wing populist motivated by concern for the human rights of Venezuelans.

This is a total reversal of the facts on the ground in Venezuela, and of the CIA’s true role in Central and South America. In reality, the US government’s preferred leader of Venezuela – Juan Guaido – is right wing, a product of international capitalism and economic hit men. While some of the real world Venezuelan opposition are socialists, they aren’t the ones being supported by the US.

Historically speaking, the CIA’s role in Latin America has been to fight and overthrow left wing populist, socialist or nationalist leaders who resisted the onslaught of the corporate empire, such as Arbenz in Guatemala, Allende in Chile, and the Sandinistas in Nicaragua. The CIA favoured leaders like Reyes, military dictators who brutalise opponents and sell out their own countries, like Castillo Armas and Augusto Pinochet.

Flipping the script on these facts has the affect of convincing liberals and left wingers to support not just the US government’s intentions in Venezuela, but also the CIA’s broader role across the Americas.

Season 2 is just as racist as season 1, despite Krasinski trying to a put a progressive spin on it.

Even young children are shown to be a threat, as long as they are Venezuelans with brown skin.

Jack Ryan is a paradox – simultaneously a very up to date and relevant series about spies and geopolitics, and a crude, bigoted piece of 1980s-style Hollywood propaganda. The second season continued the show’s relationship with the CIA, but this time the DOD got fully on board, loaning the producers the use of a warship and other military vehicles.

Neither the Pentagon nor the CIA are credited on the show, in an effort to disguise their influence.

But their role was significant – Wendell Pierce based his performance of Greer on someone he met at CIA headquarters.

The US government had a profound impact on Jack Ryan, influencing its content just as they did for previous Tom Clancy productions. This is government propaganda, conducted in secret, without the audience knowing. Their aim is to shape and manipulate how you see the world.