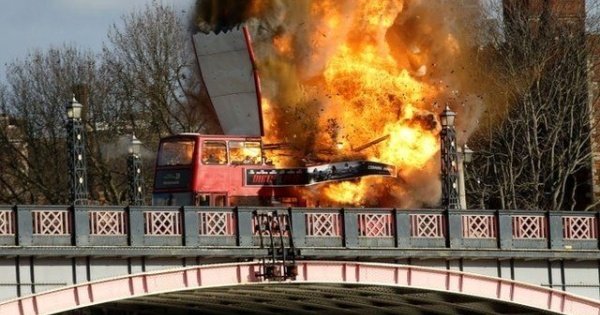 As many of you will remember, in early February a Hollywood film crew blew up a bus in central London.  The film – titled The Foreigner – stars Jackie Chan, former James Bond Pierce Brosnan and is directed by Martin Campbell, who rebooted the Bond franchise not just once, but twice, directing both Goldeneye and Casino Royale.

Because the bus explosion was so eerily reminiscent of the 7/7 London bombings and because I read about the Ministry of Defence, MI5 and MI6 being warned about the explosion ahead of time, I decided to file some Freedom of Information requests.  The Met Police responded, suggesting I talk to someone in their Film Unit to discuss my questions. I said that I still wanted copies of any documents they had, so they refused my request.  But it is how they refused it that really tells the story.

A few months ago I filed a similar request about the movie Kingsman, where one crucial scene was shot at a real police station. They admitted that they had documents about this, but ultimately my request was rejected. When they rejected my request about The Foreigner, they simply copy-pasted their rejection about Kingsman. This is evident because in two places in the email they’ve forgotten to replace ‘Kingsman’ with ‘The Foreigner’.

Whether this is special treatment or whether they would do the same for anyone else, I don’t know. Perhaps some of you could put in similar requests and find out. What I do know is that this is simply the latest in a long line of experiences with the Met Police that shows they do not take seriously the Freedom of Information Act, transparency and accountability.

Why were these film-makers allowed to recreate a terrorist attack in central London that almost exactly mirrored what really happened?  Did the authorities consider the similarity to the London bombings in allowing this to happen?  Why were the security services warned but the public were not, apart from a few ineffective posters?  I seek answers to these questions and more, and if and when I get them, so will you.