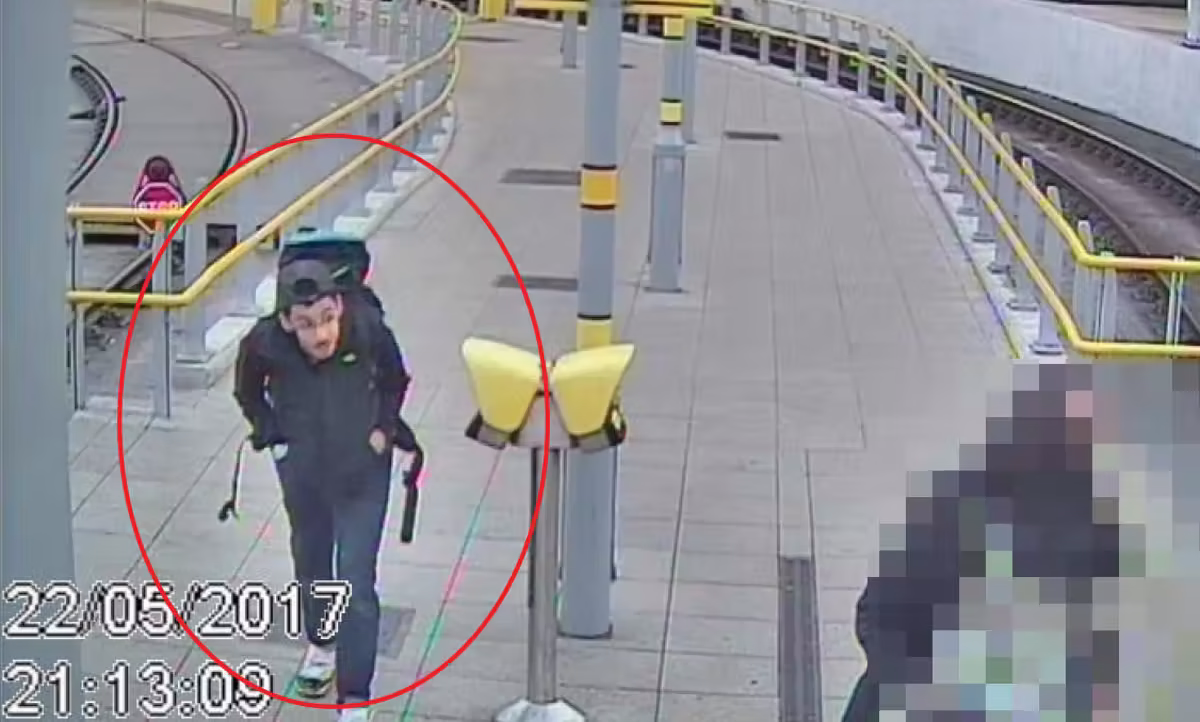 The Manchester Arena bombing in May 2017 killed 23 people and injured over 1,000.  On the fifth anniversary of the bombing I take a critical look at newly-available evidence and ask whether Salman Abedi was actually working for British intelligence, and why MI5 have lied about what happened.

Since the bombing, questions have persisted about what MI5 and the counter-terror police knew about purported suicide bomber Salman Abedi and what they were doing about it, in the run-up to the attack.  In response to these questions, the British government’s inquiry into the Manchester Arena bombing recently heard previously-secret evidence from British intelligence.

The inquiry had heard from several counter-terrorism officials, both in open sessions and closed court, but bereaved families of the attack’s countless victims have pressed for further answers, leading to the recent disclosures.  ,Following evidence from several Special Branch officers, a ‘gist’ summarizing the in-camera (secret) testimony of British intelligence officials was read into the record by Paul Greaney QC.

The gist’s opening moments are illustrative of its inherently farcical, obfuscatory nature, and are quite astounding.  “This gist does not contain findings of fact but simply summaries of aspects of the oral evidence provided during the closed hearing,” Greaney blustered.
Few people will be reassured that the testimonies of British security service officers are not a factual account of what happened in the months and years running up to a major terrorist attack.

Greaney went on to summarize what was known about Salman Abedi, the purported killer of 23 people at the Manchester Arena in May 2017. Abedi is widely accepted to have been a lone wolf suicide bomber, though other suspects including his brother Hashem and his father Ramadan have been tied to the bombing plot by the British government.

According to the document read out in court, British intelligence first became aware of Abedi in March 2014, when he was in contact with a “subject of interest” – SOI – to MI5, believed to be helping young British Muslim men travel to Syria.

However, the prior testimony of a senior MI5 officer, known as Witness J, contradicts this. They said that, “we first received information on Salman Abedi on December 30 2010,” before describing how Abedi came to their attention again three years later, in December 2013. Both times, nothing came of MI5’s investigations.

Why the contradiction? While it wasn’t until March 2014 that Abedi was first flagged by MI5 as an SOI, MI5 had information on him for years beforehand, and had linked him to multiple others who they were scrutinizing as suspected terrorists. Why were these facts left out of the document?

In July 2014, in the midst of MI5’s investigation into Salman, the Abedi family left the UK and travelled to Libya. Two weeks later, on July 21st, Salman was closed as an SOI by MI5, and on August 4th he and his brother were evacuated from Libya by the Royal Navy, on board the HMS Enterprise.

While these facts were included in the gist, this evacuation garnered no further examination either in the gist, or in the testimony of Witness J. Why would someone who had been on and off MI5’s radar for years, and even been flagged as a subject of interest and deeply investigated for his potential ties to violent extremists, be given a free ride by the British Navy?

One possibility is that the British secret state approved of if not outright encouraged Abedi’s insurrectionary associations. His father, Ramadan, was part of Libyan Islamic Fighting Group (LIFG), a terrorist organization that proclaimed allegiance to Osama bin Laden. Formed by veterans of the Mujahideen’s battle against the Red Army in Afghanistan, in the mid-1990s it attempted to assassinate Muammar Gaddafi, allegedly with the support of MI6.

When this effort was unsuccessful, LIFG operatives fled Tripoli and many were granted asylum in Britain. However, London’s relations with Gaddafi warmed considerably in the wake of 9/11 as Libya became an important component of the CIA’s ‘extraordinary rendition’ policy. This led to LIFG being proscribed in 2005, its representatives made subject to ‘control orders’ – effective house arrest – and their passports confiscated, to prevent them waging jihad abroad.

This changed in 2011, when the Libyan civil war began. Middle East Eye has exposed how many LIFG representatives not only had their control orders rescinded almost immediately upon the conflict erupting, and their passports returned, but were given an “open door” to travel to Tripoli and violently overthrow the government. One nameless fighter testified that he was actively encouraged by an MI5 officer to join the battle, and indeed they got him out of trouble with counter-terror police on one such trip.

Another interconnected possibility is that British intelligence were trying to recruit Abedi – who fought in Libya – and/or his brother Hashem as agents or informers. Their obvious proximity to people MI5 were spying on, and familial background, certainly suggests they could’ve been candidates for an approach by a polite gentleman who works for the government.

One indication of this came in May 2015, when MI5 considered “opening a lead into Salman Abedi and another individual,” but “no such lead was in fact opened.” However, from June 2015 until August 2016 during an MI5 investigation into another target, Abedi was apparently being treated as a “tier two SOI” in contact with the target, “whilst not formally being a subject of interest himself.”

Multiple MI5 witnesses testified that designating someone a “tier two SOI” was not normal practice, with one investigator saying, “they did not recognise the concept and that as far as they were concerned, a person was either an open or closed SOI.” Witness J said “the concept of a de facto Tier 2 subject of interest was imperfect because although there were some advantages in terms of practical intelligence gathering, it meant that the formal closure process and assessment of risk presented by the person would not take place.”

Was Salman Abedi Recruited by MI5?

Evidently, individuals categorized as Tier 2 would be of interest to British spying agencies, both for surveillance and recruitment – after all, who better to gather intelligence on a target than their own friend and trusted confidante? That the designation’s terms apparently do not permit risk assessments to be conducted on the individual in question means that whether Abedi was a spying target or spy himself, his incendiary activities officially passed under the radar.

In any event, in October 2015, Abedi was re-categorized as a formal SOI, but this was bizarrely retracted again the same day. Witness J explained that they thought Abedi was a “first level contact” of “a senior Islamic State figure in Libya.” However, when they realised Abedi was only a second level, i.e. indirect, contact of this senior individual, they shut him down as an SOI.

In the meantime Abdalraouf Abdallah, a friend of Abedi’s, had his home raided and searched by police and his phone confiscated – he was subsequently arrested and had another phone confiscated. Both of these phones contained text message conversations between Abdallah and Abedi, including texts in which the latter expressed a desire to become a shaheed, which can mean a martyr or suicide bomber.

The gist gets very vague at this point, saying that “the normal practice of Counter-Terrorism Policing would have been to provide material of this kind immediately to MI5 and Counter-Terrorism Policing has no reason to believe it did not happen on this case.”
However, it also says “MI5 had not received that material prior to 22 May 2017,” i.e. the day of the Manchester bombing. Similarly, when Abedi travelled to Libya by way of Istanbul in May 2016, MI5 knew that he had gone onto to Libya but didn’t tell the counter-terrorism police, even though a police officer had flagged up his trip to Turkey as suspicious.

Was information being compartmentalized so as to protect Abedi’s secret status? Salman made two visits to see Abdallah in prison – once in 2015, before Abdallah’s trial, and again in January 2017, after he was convicted, but neither of these visits seems to have set off any alarms at MI5.

In early 2017 MI5 received yet more intelligence connecting Abedi to SOIs under investigation. This was the fifth and sixth time that he turned up in the course of investigating other British-based jihadis, and finally MI5 cottoned on to Abedi’s relevance.

Again, the timeline is confused – according to Witness J they received this additional information in January and April, but the gist says it was in March that Abedi “hit a priority indicator,” and again in May. A meeting was scheduled for May 31st to discuss Abedi further, but it was too little, too late.

This pattern of inexplicable delays, repeated failures to share vital information, contradictory timelines of events and the clear implication that a would-be suicide bomber was targeted for recruitment by MI5 echoes the run-up to the 7/7 London bombings in 2005.
In that case, MI5 actually had phone numbers, license plates and surveillance footage of some of the supposed bombers, yet still somehow failed to investigate them, and prevent the attacks. For years prior to the bombings they turned up during MI5 operations targeting British jihadis and the wider international Islamist movement, but leads were consistently not followed up and dots left unconnected.

Whether these strange, ongoing and seemingly risky practices are a deliberate decision is an open question, and will no doubt remain so despite the inquiry’s best efforts. After all, investigation of these elementary quandaries would raise the possibility that Abedi was working undercover for MI5 at the very moment he blew up the Manchester Arena, a possibility that British intelligence simply won’t discuss.