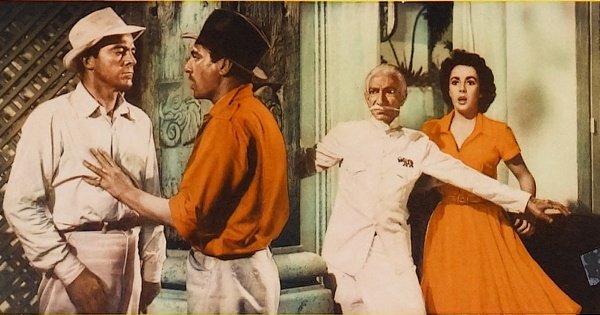 In 1953, in the early weeks of the Eisenhower administration, the CIA conducted an operation to alter the content of Hollywood films to help promote positive images of America to foreign audiences.  A series of letters addressed to a CIA officer named ‘Owen’ were written by an executive at Paramount – now known to be Luigi Luraschi – outlining the changes to movies that he made and attempted to make on their behalf.

Luraschi’s letters were discovered in the Eisenhower Presidential Library among files belonging to the secretary for Charles Douglas Jackson – a veteran of OSS psychological warfare operations.  Jackson became a speech-writer for Eisenhower and following the election was appointed as a special assistant to the new president.  He was a liaison between the CIA and the Pentagon, and advised Eisenhower on psychological warfare issues, working closely with the Psychological Strategy Board.  One folder among the Jackson materials at the Eisenhower library is titled ‘Movies’, which is where the Luraschi communications were found.

Initially, in her book The Cultural Cold War: The CIA and the World of Arts and Letters, Frances Stonor Saunders misidentified the author of these letters as Carleton Alsop, a Hollywood producer at Paramount who Saunders believed was a CIA asset.  It seems that Alsop was an Agency asset and was in contact with Howard Hunt during this period.  According to Saunders it was Alsop who negotiated on behalf of the CIA to buy the rights to Animal Farm and 1984.  However, academic David Eldridge subsequently figured out the true identity of the man behind these ‘movie reports’ – Head of Foreign & Domestic Censorship at Paramount, Luigi Luraschi.  Saunders’ mistake is somewhat understandable as the first letter has Alsop’s name handwritten on it (presumably by Jackson). Among other roles, Luraschi was a frequent chairman of the MPAA’s International Committee – an extra review board established by friend of the CIA and MPAA president Eric Johnston.  Luraschi held this position in 1950, 1951, 1953–1955 and 1958, throughout both the CIA and the State Department’s early operations in using cinema as a means for international propaganda.  They were concerned during the early Cold War period that the US be seen positively by film audiences all over the world, in contrast to the dour and evil and oppressive Soviet Union.  Given that the Soviet film industry had only a small presence in the international entertainment market, Hollywood and US entertainment in general were seen as significant and advantageous tools in the ‘Cultural Cold War’.  We can trace this back to the 1943 OSS memo on Motion Pictures as Weapons of Psychological Warfare, which laid out how movies were the best means of shaping the perceptions of audiences both foreign and domestic.

The letters to ‘Owen’ include intelligence on those executives who were loyal to the government and could be relied upon when it came to this sort of nationalistic and anti-Communist propaganda.  Luraschi warned the CIA against taking seriously Dore Schary’s conversion from being a Leftist who expressed reservations about the Hollywood blacklist to being an anti-Communist mouthpiece, and said that Billy Wilder was ‘a very very liberally minded individual’ who ‘will have to be guided very carefully’.  Meanwhile he said that Darryl Zanuck ‘will not consciously do anything to help the left’ though ‘how militant he will be against I don’t know either. Personally, very much so, I should imagine, but perhaps not in his product’.

However, perhaps the most important topics in the letters are Luraschi’s ideas and efforts towards changing the content of films.  Having outlined which of the major studios could and could not be trusted he commented that the Production Code Administration, ‘is a wonderful spot to keep check on the Independents, both from the standpoint of eliminating troublesome material as of injecting stuff’.  This is perhaps the most explicit acknowledgement in any documents I have seen of how MPAA and the PCA were sometimes employed as part of government propaganda efforts.

One of the ideas evidently discussed by ‘Owen’ and Luraschi was to portray the US as much more racially harmonious than it really was (bear in mind this is while the Jim Crow laws were still in effect).  From the very first letter Luraschi talks of placing black characters into movie scenes in the hope of convincing foreign audiences that this was an accurate representation of American society.  He wrote:

This subject has been discussed with Casting.  Henceforth, wherever the background of the picture permits, well dressed negroes will be planted as a part of the American scene, without appearing too conspicuous or deliberate.

He notes that this would prove impossible in the early 3D film Sangaree due to it being a period piece set in the South which:

[W]ill consequently show Plantation negroes. However, this is being off-set to a certain degree by planting a dignified negro butler in one of the principals’ homes, and by giving him dialogue indicating he is a freed man and can work where he likes.

Similarly, with films set in foreign countries Luraschi tried to temper their often colonialist overtones by portraying the natives in a more respectable way.  On Elephant Walk – filmed and set in Ceylon – scenes were rewritten to be more respectful of the locals.  Luraschi wrote:

We have had scene before Bhuddist [sic] shrines rewritten, to remove jocular feeling, and possible disrespect from dialogue of principals.  Understand, Bhuddist organization in Ceylon made same request of producer, so we are on the beam.  New dialogue has been approved by Bhuddists. Likewise, of the Martin and Lewis comedy Money From Home:

There was one funny gag involving a couple of wives of a visiting Pasha, a horse-race lover. We have had the gag removed, since it involved the manhandling of Moslem women by Lewis, and in my opinion would have had disastrous results in the Moslem world.

Luraschi also had the ability to kill off ideas or scripts for movies that did not meet with these propaganda aims.  He writes of Gringo:

A comedy vehicle for Bob Hope, involving Mexico, bandits, etc. Very funny, but very offensive South of the Border. Idea has been killed… Done by a U.S. company with a U.S. comedian, it would be most injurious to our Latin-American interests.

The movie was never made.

The other recurring theme in the Luraschi letters is the efforts made to make Americans, and by extension America, look better.  For Secrets of the Incas Luigi wrote that they weren’t sure if Paramount would produce the movie but he made changes anyway.  He wrote:

In the meantime we have planted the background for the female lead, so wherever the story goes, at least this will have a chance of remaining as an integral part.  The girl is now no longer an American girl of dubious virtue, but a nice foreign girl.  Whatever she did in her past was because she was on the run after the Commies took over the country, which until then had been a very nice place to live in.  Not quite as blunt and corny as this, but in essence this will be the idea.

Another set of changes concerned the appearance of drunken Americans in movies.  In one letter Luraschi notes several movies where drunken or at least hard-drinking American characters were altered: Alongside the elimination of America’s alcohol problem Luraschi also shaped a production about the possibility of nuclear war, that at the time was only in its very early stages:

Paramount had just made a deal with the author of the above piece, Beirne Lay, Jr., to do a story with Jimmy Stewart in the lead about the Air Force problem of keeping ex-air force men active in the reserve activities, in order to form a squadron of B47’s (the new six engine bomber) which would be capable of instant mobilization to deliver an atom bomb on any target in the world.

I’ve spoken to the author and have told him we don’t want this project to develop into a picture which the enemy can use to show that we are a lot of trigger-happy warmongering people, just itching to drop atom bombs at the slightest provocation, particularly on Orientals. The story doesn’t have to be like this at all. The author agrees with me, that this impression must be avoided.

This would become the film Strategic Air Command, which didn’t even have a first treatment until two months after this letter was written.  The political tone of the finished film was entirely in keeping with what Luraschi outlines here.

Was Luraschi working for the CIA?

The exact nature of the relationship between Luigi Luraschi and ‘Owen’ is still unclear over half a century later.  No document on the CREST database refers to Luraschi, and the rest of the CD Jackson folder on movies is a smattering of documents relating to similar ideas, but nothing that elucidates what was going on in this relationship.  Clearly ‘Owen’ was writing or talking to Luraschi as the letters frequently mention other discussions and ask questions which were, presumably, responded to in some way.  So the extent to which Luraschi was writing to his CIA contact voluntarily, and acting as a nationalistic citizen loyal to his government and motivated by genuine anti-Communism, vs. the possibility he was targeted and recruited and used by the CIA for their own purposes, is not something we can readily assess.

However, he was working for them to some degree.  There is no evidence of any money changing hands but the CIA usually don’t pay their assets.  Instead they prey on people who are predisposed to helping them or people who can be compromised, manipulated or otherwise turned into assets who can provide information and do a job for them.  While it seems that the specific changes to films were all or mostly Luraschi’s own ideas, the strategic thinking is entirely in keeping with the CIA’s mindset at this time.  Luraschi died in Paris in 2002, aged 96.