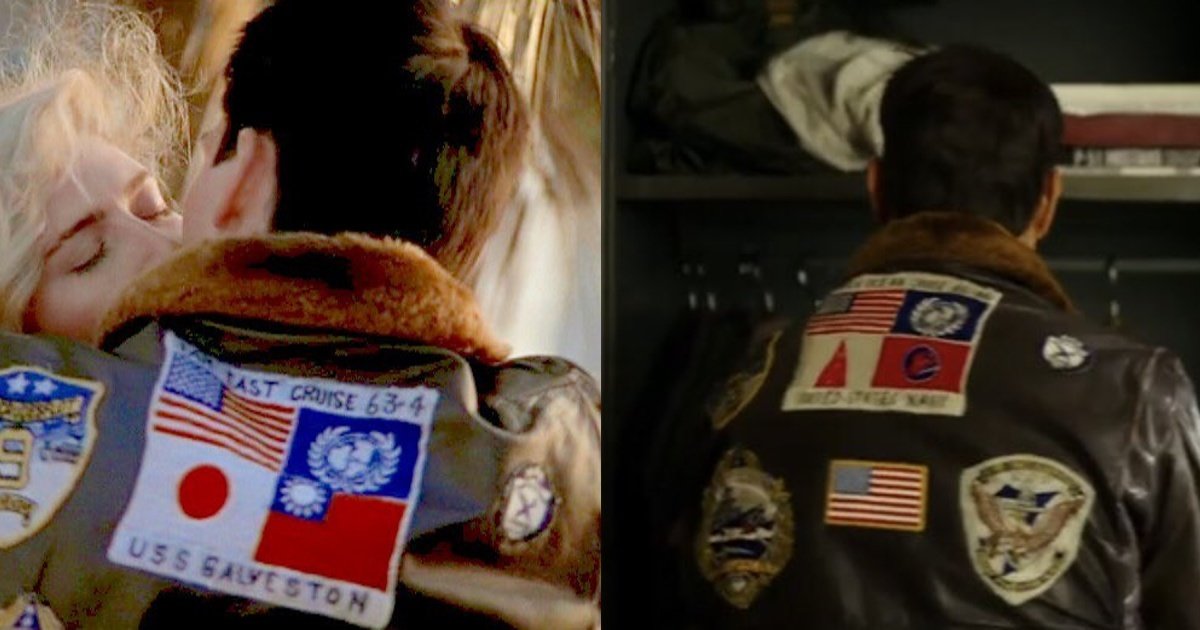 A story doing the rounds in the last few days claims that the producers of Top Gun: Maverick changed the decals on the back of his leather jacket in order to ‘appease Communist China’.  While the story may be true, not a single report has highlighted the much more egregious censorship of the original movie by the Pentagon.  As per usual, cultural warfare is reported in an extremely one-sided manner, making all of these reports a form of – you’ve guessed it – cultural warfare.

The stories originated with Globe and Mail reporter Mark MacKinnon, who posted on twitter when he noticed the altered patch on the top rear of Maverick’s jacket.

There’s a new Top Gun movie coming out. And Maverick is wearing the same leather jacket – only this time it’s Communist Party of China-approved, so the Japanese and Taiwanese flag patches are gone (screenshot on right is from the new trailer)… pic.twitter.com/gUxFNFNUKX

This tweet was picked up by Business Insider, and from there the story has spread like wildfire.  Almost all the articles make the same claim – that this change was done to ‘appease Communist China’, and most refer to China as the US’ greatest military adversary.  Leaving aside the issue of the Chinese economic system being state capitalism rather than Communism, it is certainly true that changes have been made to Hollywood films in order to gain access to the lucrative Chinese domestic market.  Whether this change was done for these reasons, only time and further information will tell, though MacKinnon pointed out that TenCent Pictures – a Chinese company – are co-producing the film.

What every single report on Maverick’s jacket has failed to mention is that the military heavily censored the original Top Gun film, going line-by-line through the script and removing or changing anything they didn’t like.  For example, when the producers considered changing the female lead (played by Kelly McGillis) to a Naval Officer the DOD told them not to because of ‘the inordinate sensitivity to the relationships in the service between male and female personnel’.  Other issues included the removal of references to alcohol on board the aircraft carrier at the start of the movie, toning down the ‘hard drinking’ and ‘sophomoric characteristics’ of the fighter pilots, references to ‘two sets of sisters’ and ‘virgins’, and the removal of any notion of an aircraft carrier ‘bobbing like a toy’ in bad weather.

Indeed, on the sequel the same process applies – with the Production Assistance Agreement for Top Gun: Maverick recording how the Navy would ‘weave in key talking points’ during their script review, and that on-set military technical advisors would help generate the dialogue.

But none of this has appeared in any of the dozens of articles about Maverick’s jacket.  Even though David Robb first drew attention to the script changes demanded by the DOD on the original Top Gun way back in 2004, and even though Roger Stahl recently copied the whole 200 page file from the Suid archive and I uploaded it, none of these ‘journalists’ felt it was appropriate to mention this censorship.

As per usual, when it’s ‘them’ doing the censoring that’s a problem that demands reportage, but when it’s ‘us’ it gets overlooked.  So strap into your cockpits, because the next few months of Top Gun: Maverick coverage are going to be a bumpy ride.