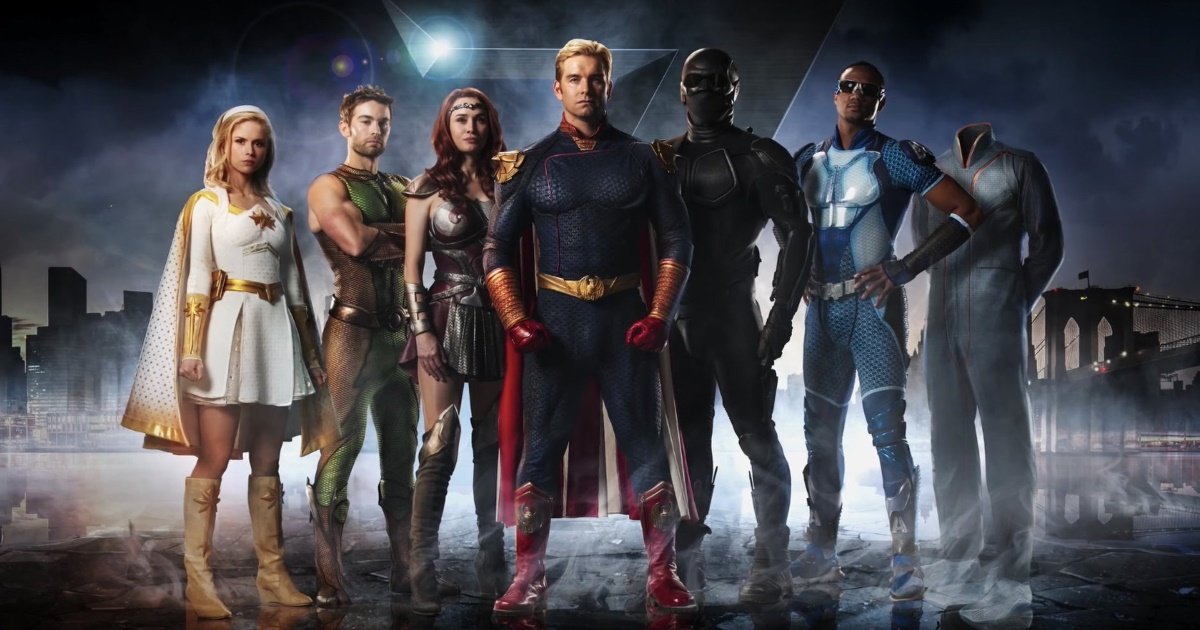 Amazon Prime’s The Boys is not only the most enjoyable TV show I’ve seen all year, it’s also the most subversive.  While it will appeal to audiences suffering from superhero fatigue after more than a decade of relentless Marvel and DC products, it is so much more than that.  It subverts both superhero pop culture and the role that culture plays in promoting the military-industrial complex.

For those of you who haven’t seen or read about The Boys: in essence it is the tale of a ragtag gang of vigilantes who fight back against The Seven – a team of elite, but entirely corrupt, superheroes and the Vought mega-corporation who employ them.  I will be quite thoroughly spoiling the show in this review, so fair warning you just got.

Context: The Many Mistakes of Man of Steel

As other commentators have noted, The Boys is likely what Zach Snyder was trying to do with Man of Steel and Batfleck vs Superman: Dawn of Narcolepsy.  ‘What if superheroes were real?’ is the basic premise, with the answer being ‘we’d all be fucking terrified of them’.

Snyder clearly saw the critical and commercial success of the Christopher Nolan Batman trilogy and tried to emulate it.  But he made one key creative mistake – instead of picking Batman or some other morally ambiguous superhero with a traumatic life story, he chose the cleanest of clean-cut, all-American superheroes: Superman.  He tried to take the American Jesus and turn him into Tony Soprano.

And it failed, miserably. Only a record-breaking quantity of product placement, along with a reduced production budget courtesy of the Pentagon’s huge-scale support for Man of Steel, saw the film turn a modest profit.

Likewise, in trying to mimic the success of the films that established the Marvel Cinematic Universe (Iron Man 1 & 2 and Captain America: The First Avenger, all of which were made with the Pentagon) Warner Bros., DC and Snyder turned Man of Steel into an advert for the US military.  This included the DOD rewriting the entire script to suit their PR and propaganda objectives:

The National Guard – who also provided support on Man of Steel – created a cross-promotional video series called Soldier of Steel to try to project the idea that being in the military is just like being Superman (life spoiler: it isn’t).

The ideological-symbolic exchange inherent in the DOD’s relationship with the Marvel and DC universes is simple: Superheroes are a metaphor for the military: the military are our real-life superheroes.

In a time of constant war this cross-branding of the military and some of the world’s biggest movie franchises is nothing short of military-industrial entertainment propaganda.

How The Boys Subverts the Military-Industrial Complex

The Boys turns all of this on its head.

Our superheroes are portrayed in the series as cynical, ego-driven megalomaniacs, especially Homelander – the leader of The Seven – an amalgam of Superman and Captain America.   Homelander’s public image is the epitome of the brightly-coloured Marvel heroes – a moral, noble public servant trying to make the world a better place.  In reality he is a vengeful murderer and a probable rapist, who sees ordinary people as puny, pathetic scum. In one early episode Homelander and Queen Maeve (The Boys‘ Wonder Woman rip-off) are sent by their parent corporation to deal with an active shooter in a skyscraper.  Though the man immediately tries to surrender when he is confronted by two semi-invincible superheroes, Homelander simply kills him on the spot, before fabricating evidence to make it look like he shot at the heroes first.

While this sequence of events will be familiar to viewers of cop shows – though not ones supported by the LAPD – it is not something I have ever seen before in the superhero genre.  In those stories the enemy always strikes first, making it not only justified for our hero/es to respond in kind, but a moral imperative.  This rationalisation for the use of lethal force is pure militaristic propaganda, making it seem like we’re the victims, when in reality all the West’s major 21st century wars have been wars of aggression.

Homelander is also a tool for soulless corporate profiteering.  A recurring storyline in season 1 of The Boys shows the Vought conglomerate trying to expand from hiring out their heroes for domestic policing and security into military contracting – not unlike Blackwater, MPRI, Dyncorp and the rest of their blood money cronies.  The diaogue is littered with references to Lockheed Martin and other major military-industrial players from the real world.

This plot involves some of the darkest and most horrifying scenes in season 1, in particular when Homelander and Maeve are sent to intercept a plane over the Atlantic that has been hijacked by generic Middle Eastern terrorists.  After screwing up, and destroying the flight instruments during a fight in the cockpit, Homelander decides to abandon the pilot-less plane in mid-air and refuses to take any of the passengers with him because they could tell the public what had really happened.  The plane crashes into the ocean, killing all the passengers – an event Homelander then exploits to try to further Vought’s plans to expand into mercenary contracting.  The parallels with the 9/11 attacks are quite obvious.

Expressed simply, our heroes aren’t heroic at all, and are a metaphor for the real-life military-industrial complex and how they exploit people’s pain and fears to make vast amounts of money.

In this sense The Boys flips the implicit ideology of comic book cinematic universes upside down, offering relevant real-world observations and provoking some very tough questions in the process.

How The Boys Subverts the Entertainment Propaganda Complex

Another target of The Boys‘ satirical wrath are the Marvel and DC universes.  Even more so since Disney’s buy-out of Marvel Studios the MCU is very clean, with little or no blood and gore resulting from the epic scale violence and – despite some very good-looking performers in the casts – no one ever has sex.

In The Boys the violence is spectacularly graphic, with notable scenes including when when our protagonist Hughie’s girlfriend is accidentally killed by the world’s fastest man running into her, when Translucent (the Invisible Man member of The Seven) is blown up via an ‘arse bomb’, and a tragi-comic scene with a dolphin that I won’t spoil for you.

The violence in The Boys is often played for entertainment, but the tone is not celebratory or congratulatory, as it so often is in the MCU.  Rather than violence being the fundamental means of conflict resolution, it is depicted as a horrific (if also amusing) by-product of conflict.

Perhaps my favourite example involves Karl Urban’s character Billy Butcher, the de facto leader of the anti-hero vigilantes who comes across like Danny Dyer is channeling Snake Plissken.  Upon discovering that the superheros are not, as the Vought PR machine claims, the special ones chosen by God, but are manufactured in laboratories and hospitals, Butcher is confronted by several armed guards.  He uses a baby with laser vision to kill the guards in a highly original but disgustingly gory moment of violence, commenting ‘Holy Fuck!  That was diabolical.’

While the realistic consequences of reckless superpowered heroes are systematically avoided in the MCU, they are front and centre in The Boys.

The show doesn’t pull its punches when it comes to sex either, especially in the story arc of our second protagonist Annie January a.k.a. Starlight.  She is recruited into The Seven in the opening episode, whereupon she is immediately manipulated/sexually assaulted by The Deep (basically Aquaman from the Justice League).  The consequences of this play out for the rest of the season, as Starlight struggles to know how to respond or deal with The Deep’s behaviour.

Unlike many other entertainment products that have ‘dealt with’ the ‘#MeToo era’ there is nothing preachy or tokenistic about this storyline in The Boys.  The consequences continue to ripple out for the remainder of the 8-episode season and even after Starlight exposes The Deep’s behaviour and he is forced into a public apology, the emotional trauma still nags at her.

This contrasts sharply with Captain Marvel – a film heralded as a feminist take on superheroes that was long overdue, but in reality is little more than bitchy snark and military recruitment propaganda with a female frontispiece.  While Captain Marvel maintains the long-standing entertainment liaison office tradition of covering up the military’s sex crime problem, The Boys offers one of the most prolonged, in-depth treatments of these issues that I’ve ever seen in fantasy entertainment.

While The Boys is hardly a perfect series – the mid-season episodes drag a little and the plot could advance more quickly – it is the most ambitious and subversive TV series I’ve seen since the first season of Fargo.  It isn’t as profound but it has a similar balance between brutal violence, high drama and genuine laugh-out-loud comedy.  It has been compared with the original Robocop, which is quite fitting as it uses a fairly standard superhero action story as a vehicle for exploring much more, satirising both its own predecessors and the role pop culture plays in the real world.

Not everything pays off – the storyline about Vought creating suped-up terrorists in order to justify the military hiring their heroes to deal with the problem somewhat falls down when it is revealed that Homelander, not the corporation, was behind this scheme.  That was the one moment I felt the series pulled its punch and reduced its high-stakes plot to some personal gameplan of an individual.  Similarly to 2009’s State of Play, this felt a little like the writers/producers didn’t have the stomach to go all the way in their satire and critique.

But a few minor gripes aside The Boys is a superb commentary on both the excesses of the superhero genre and how that genre has allowed itself to become a vehicle for military-industrial propaganda, without descending into endless self-reference and things that make twitter users say ‘meta’.  It seamlessly rebounds from deliciously fucked up ultraviolence to touching character drama to farcical comedy, building to a wonderfully understated cliffhanger that bodes well for season 2.