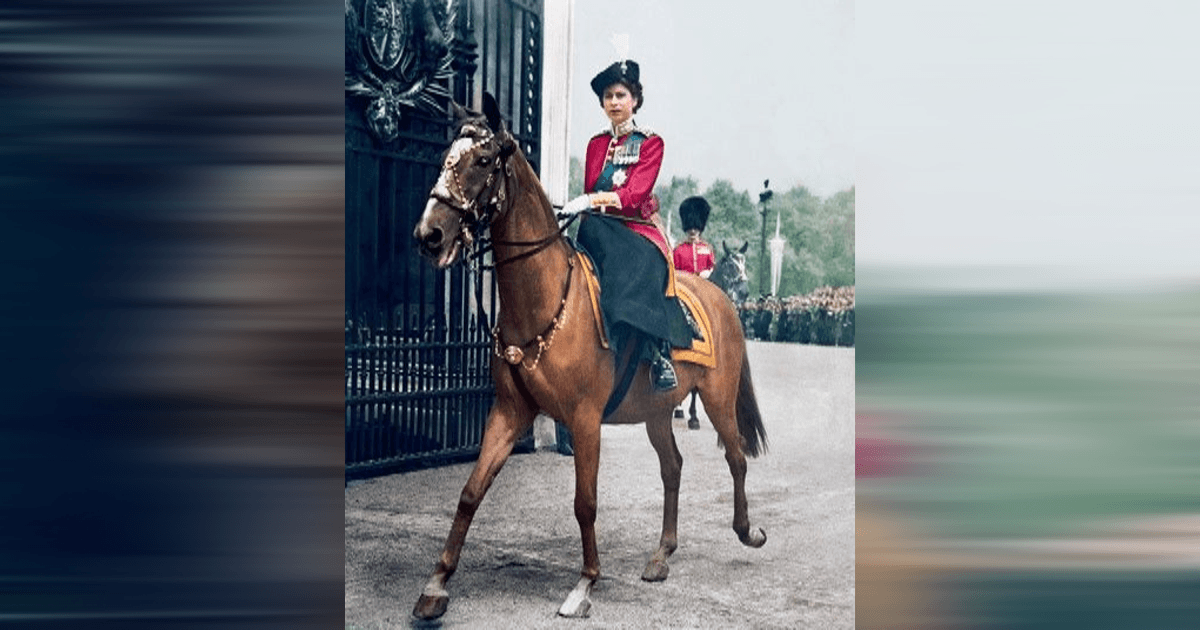 Winston the police horse was named after Winston Churchill, having joined the Met in the 1940s.  He featured in numerous royal events, ridden by both King George and princess and then Queen Elizabeth during the Trooping the Colour ceremonies in the 40s and early 50s.  Winston was also the subject of a BBC teleview, which involved getting the Met Police to review and make changes to the script.

Winston, a chestnut gelding, was born in Yorkshire in 1937 and was sold to the Mounted Branch of the Met Police in 1945.  Like all police horses recruited that year he was given a name starting with ‘W’, in his case he was named after the Prime Minister.  He was often seen on duty at public events like the Changing of the Guard, before being promoted to royal duties.  Much beloved by both King George and Princess Elizabeth, Winston did not have to have his mane trimmed in line with police regulations, as George thought it looked better long.  In 1947 George rode Winston at the first Trooping the Colour ceremony since the start of WW2, and when Elizabeth took over this role from her father she insisted on riding Winston, who had become her favourite police horse.  During Elizabeth’s coronation in 1952 Winston was rode by Sir John Nott-Bower, the Commissioner of the Met. Winston retired in 1956 and the following year suffered an injury and had to be put down.  His death was widely reported, and in true British fashion members of the public sent letters of appreciation and gifts in Winston’s name.  One might argue the public affection for Winston exceeded that of the Queen at this time.

Following the Met’s decision to start vetting scripts that featured the police they received a rather rushed request in 1952.  A letter from writer LV Thompson in the Met’s file says:

I’m inexpressibly sorry about the nonsense over this police horse teleview.  If there hadn’t been an announcement in the Radio Times and a harassed producer with 20 minutes to fill, I would have told them to go to —.

It appears the BBC were producing a short teleview about Winston and didn’t have the budget for filming original footage of him so Thompson went to the Met to try to get photographs of the famed police horse.  The Met then checked the script for accuracy and other concerns before providing help.

One of the changes the Met made was to correct the voice-over that said Winston joined the police when he was five years old (he was actually seven, older than usual for a police horse recruit).  Similarly, most of the other alterations the Met made were to the factual content of the script but they also sought to downplay how close they were to the government.  The original script said:

Winston’s usually ridden by the Mounted Superintendent of the Metropolitan Police’s Number One District, which has its headquarters right by the Houses of Parliament.

‘Right by’ has been underlined and a pencil note in the margin says, ‘Near would be better’.  The script goes on, offering the usual ‘behind the scenes’ narration that has become common to government-assisted propaganda, describing police horse training at Imber Court.  While these films and TV series – from Top Chef to The Recruit to Our Man In – claim to offer a glimpse behind the curtain of officialdom, in reality the glimpse is shaped and censored by the government agency in question.

Another change was made by the police to this section of the script.  The original teleview said:

And what it doesn’t know about training men, and horses, isn’t worth knowing.  The horses come to Imber Court as unbroken, uncurried three year olds, mostly from Yorkshire.  A good breed, Yorkshire, but you can imagine them at the beginning being — well, a bit like Len Hutton before Herbert Sutcliffe coached him into shape.

I can find no record of this broadcast but given that it was a one-off programme in the early 50s it probably wasn’t archived anywhere.  However, this was not the only time Winston appeared on screen.  He also features in this British Pathé reel about police horse training in 1956.  Winston is seen in his stable munching on some hay at around the 1 minute mark.

Met Police – “Winston”: the script of a story of a police horse for a television programme