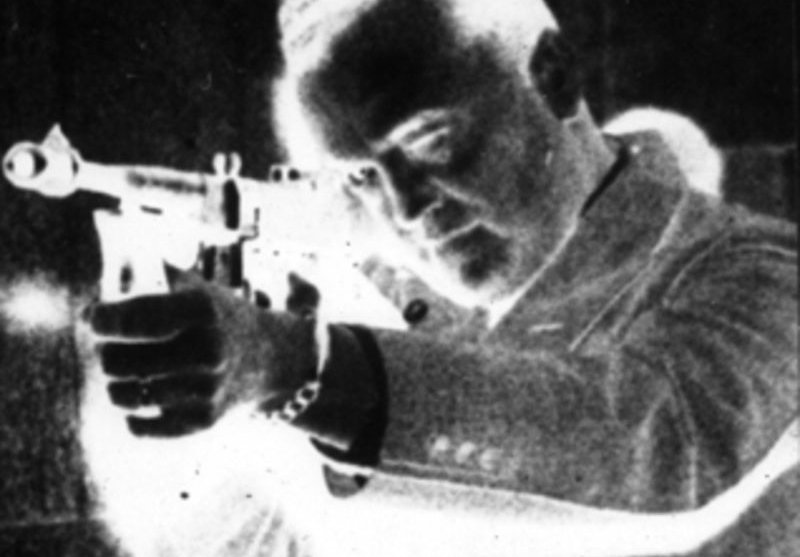 In the first of a series of releases, the FBI sent me some of their historical files on working with Hollywood, and how they helped frame the Bureau’s public image during its formative years.  This batch mostly covers 1936’s You Can’t Get Away With It – the first documentary to feature J Edgar Hoover – along with several other FBI episodes including them spying on a broadway comedy that apparently mocked the Bureau.

An earlier release can be found here, covering 1933-35, in particular how Hoover didn’t approve of films prospectively titled ‘Federal Dick’, or this phrase appearing in movie dialogue.  The newly-released documents cover 1936, and we should anticipate further releases from this file in the future.

As Hoover’s war on crime developed, and became the pretext for the Bureau of Investigation to become the FBI, Hollywood became increasingly interested in making films about G-Men, to quench the public thirst for information about this new federal agency.  Hoover and his minion Clyde Tolson were happy to provide assistance, but only on the strict condition that they and their agency were portrayed positively.

For example, in November 1936 Maurice Kellerman of Paramount was taken on a tour of FBI offices, and wanted to follow up by shooting some scenes for a short he was planning on FBI training.  A memo recording the visit comments that he:

[W]as in Washington on another assingment and evidently thought that he could lay out a complete ground work for the short in an hour and a half or two hours.

From his comments one could deduce that the company had no intention of bringing in much equipment and that they had an idea that they could borrow some from us, because he repeatedly inquired whether we had this or that piece of equipment. Of course, one cannot definitely impute the company’s attitude from just one of their representatives, but Mr. Kellermann evidently had no conception of the effort that must be put into making a short of this type of work.

Evidently, the FBI were not impressed by his behaviour.  Hoover’s handwritten note at the foot of the memo says, ‘I think we ought to go slow on allowing any such study to be made for it may be only for data to use as atmosphere in some cheap thriller.’  Kellerman’s movie was never made.

Likewise, while Hoover constantly reached out to any Tinseltown figure who praised the FBI, often putting them on mailing lists for Bureau publications, he gave short shrift to anyone who asked probing questions.  Republic Productions got in touch, writing to Hoover to ask for background help in developing their film adaptation of Dick Tracy.  They asked:

Do you believe comic strips, such as “Dick Tracy,” that glorify the law have immeasurably aided the prevention of crime by building up a deep respect and admiration for the law in the minds of our youth?

Is prevention of delinquency in youth the essential element in dissipating crime waves?

Do you read, or have you ever read, “Dick Tracy?”

What other agencies or factors are recent additions to prevention of crime?

It is sincerely regretted that because of existing Departmental regulation, I cannot furnish you with the statements and information which you desire.

The bulk of the file deals with the 1936 documentary short You Can’t Get Away With It – which was openly designed to discourage and dissuade people from committing crimes.  Perhaps not causing the Great Depression in the first place would have been a better idea, but Hollywood is usually a day late and a dollar short when it comes to solutions to societal problems.

Univeral’s You Can’t Get Away With It is a short documentary feature covering all aspects of the FBI’s activities, and was approved by Hoover and the Bureau, the Department of Justice and then Attorney General Homer S. Cummings (indeed, it was the first such film to be approved by the AG).

As you can see, the film stars Cummings, Hoover and Tolson, and opens with a caption reading:

Presented with The Permission of the Hon. Homer S. Cummings, Attorney General of the U. S., and with The Cooperation of J. EDGAR HOOVER, Director Federal Bureau of Investigation of the Department of Justice.

As such, this is one of the first examples of US cultural copaganda – a film designed to paint federal law enforcers as capable, well-trained and effective, with the explicit aim of deterring the criminal from committing his heinous, anti-social acts.  As Lowell Thomas intones on the voice-over:

This is a bureau of scientific crime detection – new, modern, up to the minute.  In action day and night, the FBI never sleeps.

The film goes on to highlight FBI agents who died while on the job, dedicating the movie to them and calling them ‘soldiers in war while the world is at peace, the victorious war that the G-Men have waged against organised crime’.  We see Hoover and Tolson discussing sending agents to different postings, the kidnapping switchboard, FBI secret teletype machines, the ‘up to the minute’ fingerprint punchcard machine, the training academy and more.

Among the more amusing moments are the declaration that female criminals are ‘deadlier than the males’, Hoover’s extremely uncomfortable on-camera presence, and grisly morgue footage of John Dillinger.  The film reconstructs the Dillinger and Baby Face Nelson manhunts, the resolution of the Bremer and Herschel kidnappings and other famous successes on the FBI’s record.

The files show how Hoover and Tolson were involved throughout the production of You Can’t Get Away With It, and their comments on a rough cut led to the removal of part of the segment about Baby Face Nelson (who shot and killed two FBI agents during their pursuit of him) and Hoover and Tolson’s scene being moved up the running order.  They even reviewed the layouts for promotional posters, and provided pictures and FBI documents to be used in marketing materials – including photos of Hoover holding a machine gun, which made its way onto some of the posters. 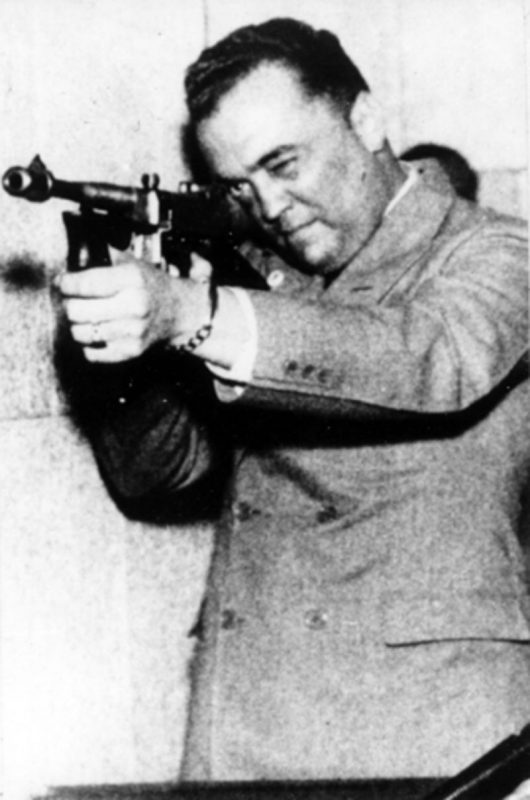 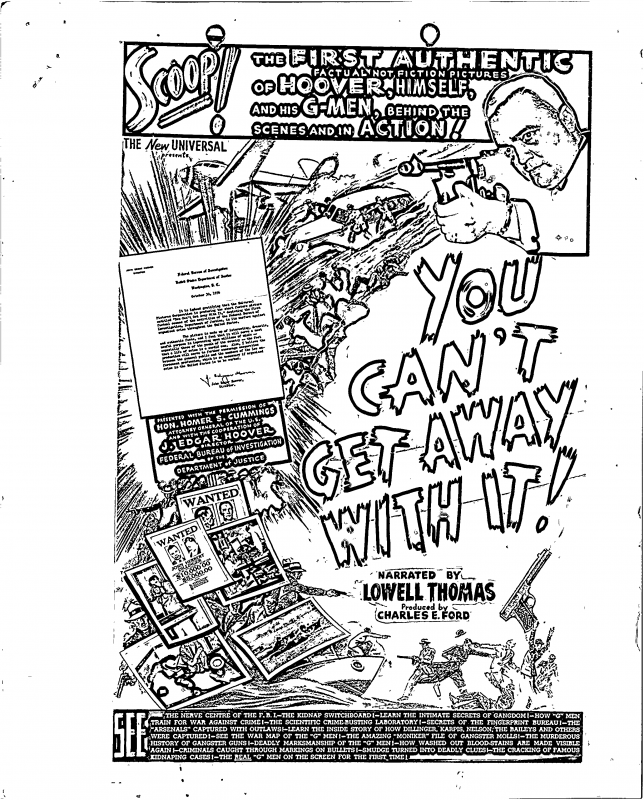 Poster for the film You Can’t Get Away With It

The file also includes press cuttings, reviews, and letters from various people (both law enforcement and otherwise) who had seen the movie.  Hoover even gave his permission for copies of his private letter to the film’s director, Charles E Ford, concerning the film’s production, to be sent to every salesman working for Universal trying to sell You Can’t Get Away With It to theatres.

However, it wasn’t all larks and happy days.  When Fred Quimby of MGM found out about the production of You Can’t Get Away With It he wrote a stern letter to the FBI, complaining that he thought they’d guaranteed him first dibs on making an FBI documentary.  Quimby wrote:

I want to tell you how keenly disappointed I am that another motion picture company was given the right to produce a short subject in your department, as it was definitely understood that our company would produce such a picture.

He recounted how he had spent considerable time and money developing a script with Mr Suyden at the Attorney General’s office that he thought had FBI approval, and so was quite irate at being gazumped by Universal and Charles E Ford.  Hoover’s response was typically bureaucratic and soulless, putting the blame on Suyden and washing his own hands of responsibility.

The final revelation from the documents is that Hoover effectively recruited Ford to look into a play at the Music Box Theater in New York, as they feared it was going to mock the FBI.  The Bureau received a phonecall asking what kind of guns their agents used, so they could get the correct replicas for use in a stage play portraying FBI agents.  The conversation revealed that the play was a ‘comic farce’ and the caller assured them it was ‘in no way is derogatory to the G-Men’.

But the federal dicks weren’t buying it, they worried that the whole thing was a ‘take off of You Can’t Get Away With It’ so they reached out to Ford to ask him to get a line on it.  A week later, having got Variety to look into the in-rehearsal production, Ford responded with a note from Variety saying:

In connection with that query on the theme of the play so far as we could find out it’s a subject with a Bronx background, which is certainly obtuse from the angle you suspected. You might pass on this info to the people interested in it, without in any wise mentioning us.

If this all seems a little cloak and dagger for a stage play that only may have been a sardonic rip-off of You Can’t Get Away With It, that’s because it is.

FBI file on liaisons with Hollywood, 1936