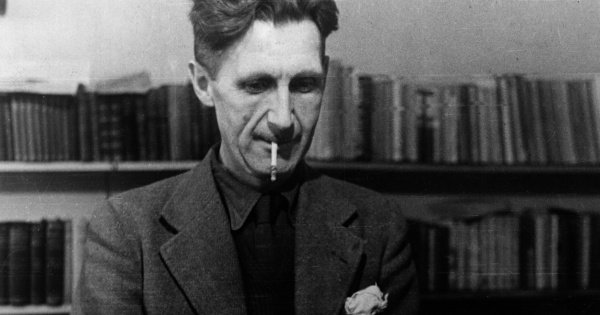 As with virtually every other 20th century writer of significance, George Orwell was on the books of the intelligence services as a suspected Communist.  His FBI file only contains material from after his death, but MI5 and Special Branch had tabs on him for 15 years before that.  The files begin in 1936, and contain a number of inaccuracies such as the year Orwell was born.  Perhaps most telling is a note recording an exchange between MI5 and Special Branch on the precise nature of Orwell’s political views. Those who have read Orwell’s works know he was no Communist, and even the more moderate term ‘Socialist’ doesn’t really apply.  Special Branch knew this, because their file includes a press cutting of a review of The Road to Wigan Pier.  The review explains Orwell’s complex opinions about Socialism. Certainly Orwell’s view that socialists are ‘bearded fruit juice drinkers’ ‘sandal wearers’ and ‘sex maniacs’ is true of modern hippy socialists, so once again he proved quite prescient about where the world was headed.  The files also include numerous vetting inquiries – for Orwell himself when he applied for a job with the BBC, among other places, but also for his wife Eileen Blair when she got a job with the Ministry of Food.  Despite the knowledge of Orwell’s radical politics, no objections were ever made by MI5.

The MI5 file contains another fantastic illustration of the complexity of Orwell’s views, and how he resisted being pigeon-holed by any movement.  In 1941 the Independent Labour Party publication LEFT issued a questionnaire about World War 2, whether it was an imperialist war and so forth.  Orwell’s answers were such that someone in MI5 added a note saying that they clearly showed he was not sympathetic to the Communist Party.

How MI5 obtained photographs of Orwell’s answer to this questionnaire is not explained, but clearly they had infiltrated the I.L.P. and their paper.  These files on George Orwell are inconclusive at best – they show that as with Wolf Mankowitz, here was a Leftist who did not fit into establish categories, and so MI5 did not know quite what to make of him.  Indeed, why they kept a file on Orwell at all is something of a mystery, given that there is no mention of his major novels, or any other reason why they were especially interested in him.