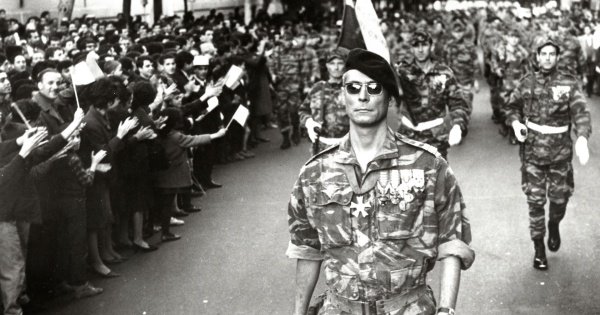 Did the Pentagon use The Battle of Algiers as a training film?

The Battle of Algiers was a groundbreaking film when it came out in 1966, not just for its depiction of the Algerian War against French occupation but for its quasi-documentary realism and its morally neutral approach, showing both sides committing atrocities.  Because of this realism it is a cinematic training manual in guerilla warfare including terrorist tactics and in state repression including torture.  Both are portrayed as horrible, but the inevitable results of the war for independence, itself the inevitable result of colonialism.  In the decades since its release The Battle of Algiers has been used as a training film by organisations ranging from the Black Panthers to the Department of Defense.  One document sheds new light on this special screening at the Pentagon.

The Battle of Algiers

The film’s newsreel style is so realistic that it had to include the disclaimer at the beginning saying this is a work of fiction based on real events, not actual footage of real events.  Despite this it is easy to be drawn in and to believe what you’re seeing either did really happen or at least could have happened.  The torture scenes especially are so graphic that they were censored out of some versions of the film.  As AV Club note:

Not surprisingly, the history of the film has been a tumultuous one, setting off such a crisis in France that the authorities banned it for several years and other countries trimmed scenes depicting the systemic torture of National Liberation Front (FLN). Much like similar scenes in Zero Dark Thirty, the torture in The Battle Of Algiers rattled a nation that didn’t care to grapple with the atrocities committed in its name.

The flipside of this is that the film makes for great instructional material for those teaching insurgency and counter-insurgency methods.  As the Carnegie Council for Ethics in International Affairs says:

The film has been used to train members of the Black Panthers and Argentine intelligence units. It has been speculated that Palestinian terror groups and al Qaeda may also use Pontecorvo’s film as a guide.

In 2003, The Battle of Algiers was screened at the Pentagon in order to offer some insight into the challenges surrounding the U.S. occupation of Iraq.

Thus, while director Gillo Pontecorvo intended the film to be political, to be a piece of anti-colonialist art, it has become something quite different.  In some ways it has encouraged the very actions that Pontecorvo portrays as the horrible but inevitable results of colonial rule.

The Screening of The Battle of Algiers at the Pentagon

On August 27th 2003 (only months after the invasion of Iraq) the Pentagon arranged a special screening of the movie at the Directorate for Special Operations and Low-Intensity Conflict.  A flier distributed before the screening read:

How to win a battle against terrorism and lose the war of ideas. Children shoot soldiers at point-blank range. Women plant bombs in cafes. Soon the entire Arab population builds to a mad fervor. Sound familiar? The French have a plan. It succeeds tactically, but fails strategically. To understand why, come to a rare showing of this film.

According to the NY Times:

The Pentagon’s showing drew a more professionally detached audience of about 40 officers and civilian experts who were urged to consider and discuss the implicit issues at the core of the film — the problematic but alluring efficacy of brutal and repressive means in fighting clandestine terrorists in places like Algeria and Iraq.

It appears the purpose of the screening was to provoke a discussion about how useful torture and other state methods of repression would be in Iraq.  Over a decade later, despite the widespread use of torture and other vicious methods, the Iraq insurgency has grown into ISIS.  I guess that means the answer to the question of how useful or effective these means are in counter-insurgency is ‘not very’.

ROGER BEAUMONT has taught history at Texas A&M since 1974. He served two tours of active duty with the army as a military police officer. A cofounder and former North American editor of Defense Analysis, Beaumont was the first historian named as a Secretary of the Navy Fellow at the U.S. Naval Academy.

While a 1st Lt, Military Police Corps, 32nd Infantry Division, Wisconsin National Guard Division, when it was mobilized 1961-62: During Survival Escape and Evasion training, following the procedure of our host unit at Port Lewis , the 4th Infantry Division, our MPs were used to guard and harass troops in a fake PoW cage. In their attempt to make things “realistic” our lads became a bit too zealous, and officers from other units and our MPs complained, I met with division chief of staff, and it was stopped. When the Stanford experiment results were published a decade or so later, I was not surprised.

At Fort Irwin, while I was Acting Provost Marshal in the “Exercise Bristle Cone” maneuvers – 1962 – I received a command letter from a four-star general asking for details on reports that Military Intelligence interrogators (Reservists called up from the Washington, D.C . area) had roughed up Aggressor PWs and taken away their outer clothing and sleeping bags when they put them out in our compound on a cold desert night. Our MPs had given the “PWs” their sleeping bags – fortunately.

These and other experiences, including the day-to-day leadership challenge of keeping police discretion on a tight leash, heightened my sensitivity to these issues. Many years later, when I had gained some reputation as a military historian, in full expectation that difficulties along these lines would arise in the future, I wrote two pieces on the subject:

“Thinking the Unspeakable: On Cruelty in Small Wars, SMALL WARS AND INSURGENCIES 1:1 (April 1990)

Reportedly they showed ‘The Battle of Algiers’ in defense circles before the Iraq War to sensitize them to these very pitfalls. Did they use it as a training film?

There is much about this email that is interesting, not least the ease with which soldiers slip into ‘abuse mode’ even during training exercises.  This is not surprising, the entire military doctrine of human history is about dehumanising the enemy but also dehumanising oneself, turning even ‘our’ soldiers into proto-sociopathic beings.  Like Beaumont, the Stanford Prison Experiment is not particularly surprising to me.

As to Beaumont’s question at the end – whether the Pentagon used The Battle of Algiers as a training film – while they weren’t explicitly doing this (at least as far as we know) they were in effect doing this.  This is different to the film’s use by Argentine intelligence and the Black Panthers – they were studying the techniques used by the warring parties.  The Pentagon appear to have been using the film to encourage the idea among those determining policy and strategy for the Iraq war that torture was a viable option.

Roger Beaumont email re: screening of The Battle of Algiers at the Pentagon