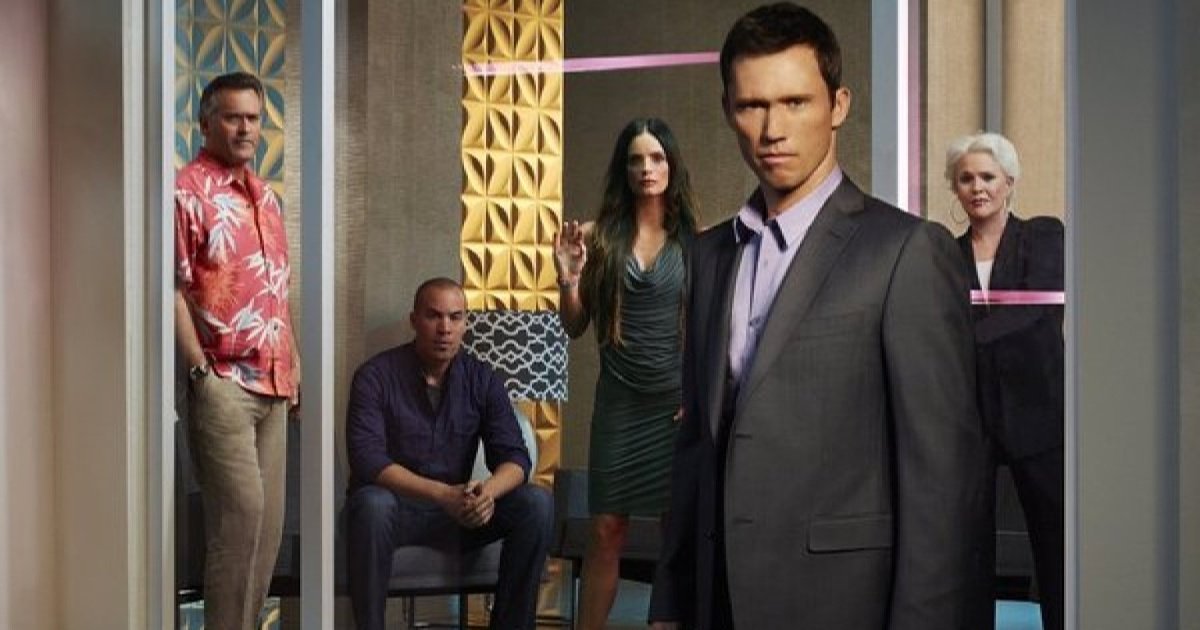 The FBI recently released a tranche of documents on the USA Network TV series Burn Notice.  While most of the file is redacted – in many cases every paragraph of every page – the small amount of unredacted information shows that the FBI and NSA are keeping tabs on how spies are portrayed on television.

In late 2015 Muckrock user Emma Best filed a request with the Bureau for any documents mentioning Burn Notice or the book The Setup: Memoirs of an NSA Security Operation on which the series is based.  After two ‘no responsive documents’ responses they finally released over 100 pages of heavily-redacted papers.

Some of the documents appear to be an email chain or discussion thread talking about how the NSA and its DOD liaison arm the CSS (Central Security Service) are portrayed on TV.  The NSA had to review these pages before they were released, and many of the comments were clearly written by NSA employees, not FBI agents.  For example:

The show Burn Notice featured a spy who wasn‘t “strictly affiliated with any one agency” or however he put it. But there was a recurring character who showed up a few times with a bad[ge] from “CSS”. I don’t remember why they didn’t just call him an NSA person. Maybe they referred to it as the military arm of NSA. I remember thinking it was a weird distinction. . especially since he was in a suit, not a uniform.

The show Timeless had NSA show up recently (haven’t watched the last few episodes so i don’t know what they’re up to currently). Mostly to be an antagonist (obviously).

Another memo is titled NSA in the Movies and appears to be an NSA-produced run down of entertainment products that feature the NSA.  Almost every paragraph is redacted due to being ‘non-responsive’ except for the one on Burn Notice, the subject of the FOIA request:

The TV show “Burn Notice” (about a spy who is fired) has featured CSS agents. The ID card used by the agent appeared to have the actual CSS logo.

Indeed, the documents released by the FBI appear to have originated within the NSA, including entries on the internal blogging system NSAJournal.  Exactly why the FBI had copies of these documents, and for what purposes, is not clear aside from monitoring depictions of spies on TV.  One of these blogs mentions Burn Notice in passing:

The girl who played Sonora in the 1991 movie was Gabrelle Anwar, now all grown up on the USA show ‘Burn Notice.‘ (An okay show, though it hasn’t made my ‘must—see’ list. I guess it hits too close to home, since l’ve been given my ‘burn-bag notice,’ that being, “you’re going to be stored down in the basement effective next month.”

Another blog entry titled October Monthly Notes mentions a trip to Miami – where Burn Notice is set.  It comments:

Miami was nothing like what ███ and I expected. I expected to be murdered/robbed and ███ was expecting Dexter or Burn Notice. The whole time we were there no one was murdered (that we saw), nothing exploded and I never got robbed. Successful trip.

Yet another NSA blog titled History Rocks appears to be part of the CCH (Center for Cryptologic History) and was looking for suggestions for relevant movies and TV shows, presumably to be shown to NSA staff.  One comment says:

I would recommend you take a look at the TV series ‘Burn Notice’ that was on for several seasons. It is about a CIA agent who has been burned and sidelined for something he didn’t do. He attempts to find out why, running into previous friends and frenemies from various intel organizations in many different countries. They include dastardly NSA/FBl/DOD/CIA, and everybody else, representatives tracking him. His girlfriend is an Irish IRA weapons expert and he finds himself in the midst of continuous chaos. The cast is excellent. All of the shows are both humorous and provide, more or less, technical info on how intelligence is gathered.

Another blog called External Gravity, subtitled What’s Making You Feel the Pull? includes a post titled Questioning Reasons to Leave.  What appears to be a comment on this blog mentions several TV series:

I’ve never seen it. Is that a show filmed in Miami about football? I watched Burn Notice when it was on… hahah… that‘s filmed right by Biscayne Bay and South Beach. My sister-in-law used to have a condo in Biscayne, and she used to be able to see them filming many of the scenes from her balcony.

My favorite Miami TV show though. is Miami Vice. There are actually quite a few former Miami Dolphins players in that TV show. They would occasionally get the “extra” parts… some of them with speaking roles, which is funny. Any Given Sunday (with the Miami Sharks’ versus whoever), also had a bunch of Miami Dolphins staff. .. like the grounds crew, equipment stafi, and the medical trainers.. they just hired them on to do those scenes in the movie. Dexter was pretty good. The whole first season was filmed in downtown Miami, but then they moved production to California, and only filmed scenes in Miami when they needed landmarks (like anyting on South Beach, or whatever).

I’m re-watching all the X-Files episodes though, in preparation for the new X-Files series that comes out in January… l’m not ashamed to admit it… totally psyched. I grew up in the DC Metro area, so I love seeing lots of areas in and around Maryland and Northern Virginia. (They filmed most of the woodsy scenes in Canada though).

Why the FBI would have copies of these memos and blogs is not at all clear, but the NSA/FBI are not the only ones to keep tabs on spy fiction.  The CIA also reviewed Burn Notice for a Film and TV review supplement to Studies of Intelligence.  A 20+ year veteran of the CIA writing under a pen name commented:

Burn Notice is a highly entertaining, action-filled television series about a former spy, Michael, who was “burned” or discredited by someone (not further identified) in his former organization and basically hung out to dry. He spends his time doing unusual jobs for hire, fighting criminals and getting people out of trouble, while all the time trying to find out who burned him and why. He’s got two sidekicks, a gorgeous ex-girlfriend and a former colleague, who feature in each episode. They are all highly trained operatives who can build explosives in their kitchens; handle most any kind of vehicle, weapon, or piece of technology with aplomb; and play any role that is required of them in their efforts to complete their “jobs.” The show, filmed in Miami, is glitzy, glamorous, and portrays the role of a spy as exciting, spontaneous, and mostly successful—the spies generally manage to get the bad guys killed and the mostly innocent victims out of trouble.

Michael has built a network of contacts in all areas of the Miami underworld and gets what he needs in the way of weapons, money, and supplies. The value to an operative of such a network and the skills needed to acquire it are highlighted. The show’s writers illustrate the value of good information, intelligence, in any operation, showing the detailed files Michael compiles on his targets and the types of data he collects—their habits, behaviors, relationships, overseas contacts, funding, cover stories,
and backgrounds. He is highly skilled at developing and maintaining professional relationships and has the complete trust of his two partners.

Burn Notice does a credible job of portraying the less glamorous aspects of espionage work. For example, Michael’s family lives in Miami and frequently involves itself in his life, but he is torn between his desire to maintain a relationship with them and his need to avoid getting too close to keep them from becoming embroiled in his activities and to avoid opening himself up to them. The show thus offers a glimpse of the isolation an operative can feel when he has few confidants and is used to working independently; this inability to form solid personal relationships is one of the main plot themes.

At the same time, the show can be humorous, as the clever writers continually come up with apparently impossible situations from which Michael and his partners must extricate themselves. Plan A rarely ever works—thus showing the need for backup plans. Burn Notice also underlines the importance of help: Michael rarely ever succeeds without the help of his two friends. In demonstrating the need in espionage for such attributes as flexibility, adaptability, and ability to think on one’s feet, Burn Notice—even while largely written tongue-in-cheek—depicts spies in a positive light. On top of that, good prevails over evil in nearly every episode, a welcome portrayal of espionage for a change!

What none of these reviews and comments mention is that the central character in Burn Notice – Michael Westen – is based on real life former US spy Michael Wilson.  Wilson is most likely a former CIA officer, but the ambiguous nature of the reporting on him suggests he also worked for other agencies too.  Bizarrely, showrunner Matt Nix admitted that even though they get a lot of story ideas from Wilson, he had never actually met the former spook face-to-face.