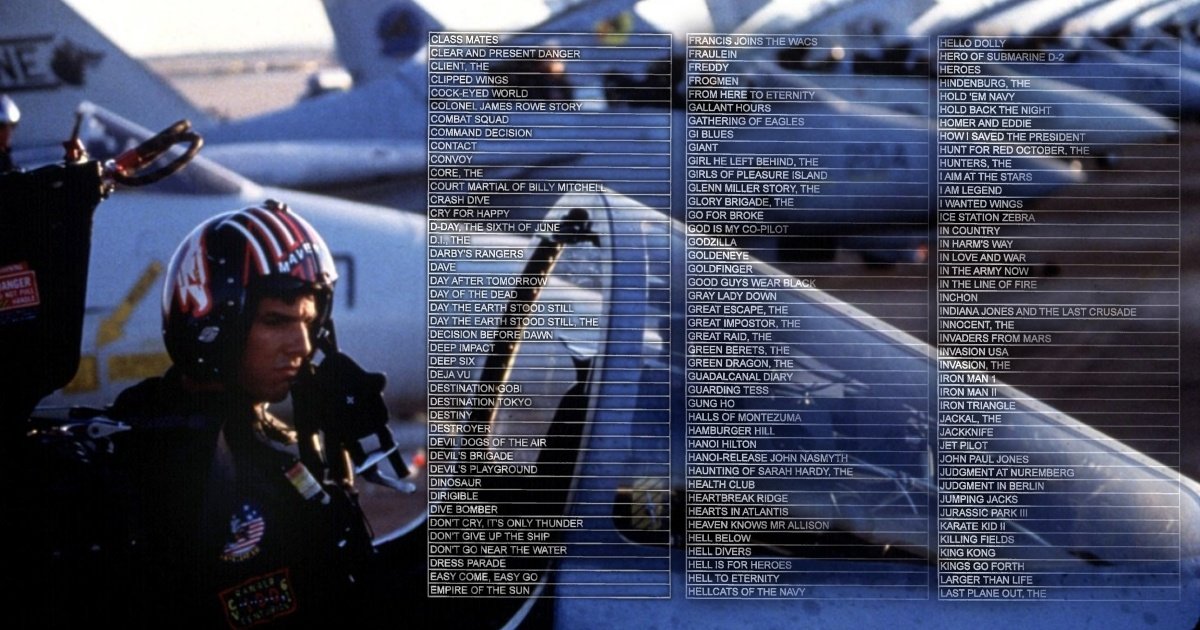 Sometimes the Freedom of Information Act is a strange beast and you receive something you didn’t ask for, but are still happy to get.  That happened to me recently when in response to a request about the Pentagon’s Hollywood database I received an updated list of DOD Films – movies that were assisted by the DOD.  The list is larger than the version released to me in 2014, though it is also missing a number of entries from the 2014 version.

Back when I started the Fun with FOIA project I had no idea how far I could go with it.  Since then it has liberated literally hundreds (if not thousands) of documents primarily from US government agencies who are involved in the film industry.  Some of these have found their way into major media stories and provided a new basis for investigations into this area.

The 2014 list of DOD films provided a series of leads, not least that I asked the other branches of the military for equivalent lists which turned up documents from the National Guard and the Air Force that included movies that were not included in the Pentagon’s central records.  Over time further FOIA requests and discussions with colleagues made it clear that this document is a list of files on a database maintained by the Pentagon of their involvement in Hollywood.  I am trying to get a complete copy of this database but due to some crossed wires between the FOIA office and the Office of Public Affairs they misunderstood my request and sent me another file listing for this database.

Nonetheless, this is a useful document because it expands on the 2014 version considerably.  While the 2014 list includes 323 movies the 2016 file has 410.  That is not because the Pentagon has been worked on nearly 90 movies in the last two and a half years, it is primarily because the 2016 version contains numerous entries for older films that were for some reason not included in the 2014 version.

The most notable example is Goldfinger, a movie that requested assistance from the US Air Force but according to the FBI file on Ian Fleming this request was rejected.  Nonetheless, other sources confirm that for the Fort Knox sequence there was military support and many of the soldiers you see passing out from the gas being spread by Pussy Galore’s Flying Circus are real soldiers. However, there are films on the 2014 list, for example 1977’s A Bridge too Far, starring the amazing ensemble of Dirk Bogarde, James Caan, Michael Caine, Sean Connery, Elliott Gould, Gene Hackman, Anthony Hopkins, Hardy Krüger, Laurence Olivier, Robert Redford and others.  Indeed, both lists contain 32 films starting with the letter ‘A’ but they aren’t the same 32 films. However, neither list includes the 2015 film Aloha, which is referred to in the Air Force’s entertainment liaison office reports, so neither the 2014 nor the 2016 list can be considered definitive.  Both include some older and some newer films, but neither contains all of them.  The 2016 list of DOD films is missing some that the 2014 list includes, and new movies are sometimes not being added to the central database.  However, sometimes they are – at least two other recent DOD-assisted movies Whiskey Tango Foxtrot and Bridge of Spies are is included on the latest version.

The upshot of this is that we don’t know how many films the DOD has worked on, except that it’s well over 400.  The absolute total (I have not comprehensively combined the two lists yet, and even that would not be the full and true answer) could be over 500.  Given that most of the existing literature only recognises around 200, this constitutes proof of a much larger Hollywood propaganda operation than anyone previously realised.