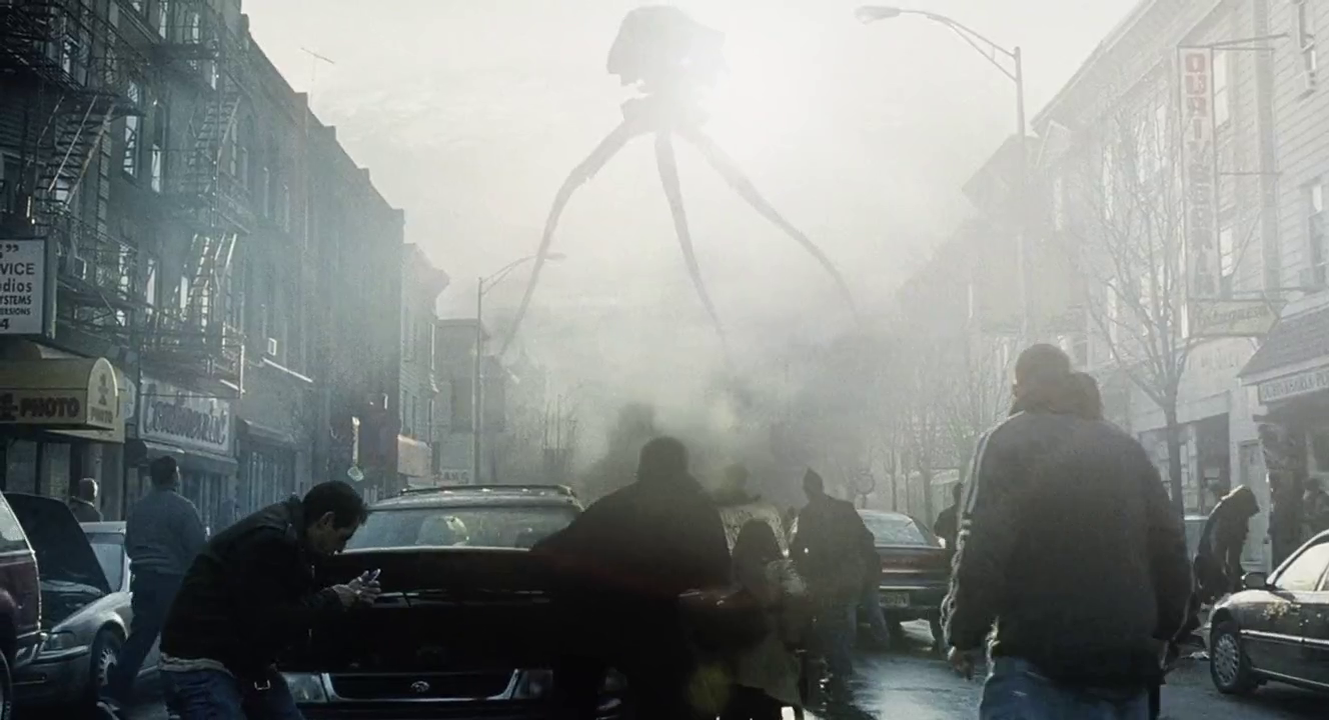 How the US Military Rewrote War of the Worlds

Steven Spielberg’s 2005 alien invasion adventure War of the Worlds helped kick off the recent string of military-supported extraterrestrial war films.  While the core story of one man trying to make his way through a chaotic world while keeping his family alive has nothing to do with the US Army, Air Force or the Marine Corps, all three military branches provided hardware in support of the battle sequences, and had some choice words to say about the script.

The film-makers initial approach in October 2004 did not go too well, with Army reports noting:

War of the Worlds. Reviewed script for military depiction. Participated in a conference call with OASD (PA) and other services. Only materiel support currently requested is from the U.S. Army. Agreed to see if there is any possibility that units in Virginia or West Virginia can support filming in December. If there is a possibility, then OASD (PA) will provide our joint suggestions for improving the military depictions beyond the comic book level.

A draft screenplay for the movie dated from the time of the Army’s review does contain a somewhat cartoonish portrait of the military forces.  When Tom Cruise’s son jumps on board a tank in the middle of an Army column, none of the troops try to stop him.  The soldiers are shown to be fearful as they head into battle, and at one point Marines are forced to retreat in the face of a vastly superior enemy.  All of these were problems for the entertainment liasion offices.  They wrote:

These soldiers would look tense, grim, but determined, not horrified, with eyes big and empty. They have no reason to think that they cannot prevail against the tripods at this point.

Rather than passively watch Robbie try to climb on a tank, it’s more likely that a soldier would warn him away, for example, “Hey, kid, knock that off, you’re gonna hurt yourself!”

In the film, this became Robbie trying to run out in front of the vehicles, and one of the soldiers warning him to get back.  When it came to the retreat, a large yellow post it was stuck to the script saying this was a no-no: 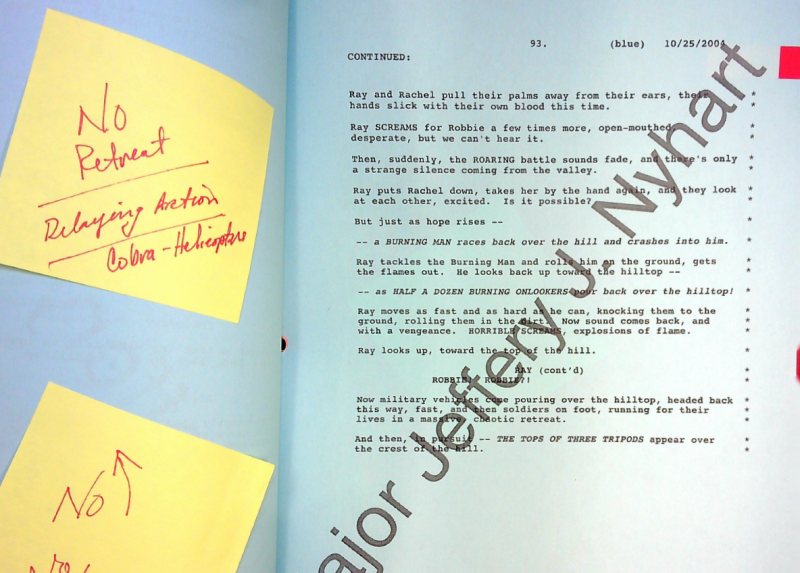 Military script review of War of the Worlds, saying no retreats are allowed

Scene 109 pg. 93  Marines don’t retreat. We conduct a fighting tactical withdrawal. We also will not have any dismounted troops. We could have a couple vehicles come over the hill and then take off in another direction to reengage the tripods at a later time. I would also anticipate that the vehicles that we’re evacuating have taken off by now. There could be some dialogue that tells them when to leave – before the armored vehicles and tripods come over the rise. Looks like Ray missed the evac.

The three military branches had a lot of input on the film’s battle sequences, where the US troops fight the alien tripods to little effect.  The large, hillside fight in the middle of the film is the major military depiction in War of the Worlds, and many of their notes focus on these scenes.  For example, the DOD’s office suggested the CGI planes be F-22 Raptors, at that time the most up to date in the Air Force’s arsenal, but didn’t want too many of them to be shot down by those infernal, three-legged foreigners:

[We] would obviously prefer only a couple of manned aircraft to be lost. In any case, our preference is that these aircraft either explode in fireballs with no survivors, or that the crews who have ejected are quickly rescued by our specialized helicopter-borne teams, even if ultimately the helicopter is unable, despite heroic evasion techniques to escape destruction.

The ground forces described would not panic and run off in all directions, completely abandoning the civilians to the tripods, but rather try to guide those who come their way to safety, and if Ray reappeared with his clothes on fire, they would put out the flames and try to persuade him to leave with them. Meanwhile, there would be other forces not necessarily seen before, Army soldiers in organized, small teams would risk their lives in trying to guide the civilians away from the attacking tripods.

However, the Marine Corps had a slightly different view of their responsibility for civilians either caught up in the battle:

Since we will not have many dismounted forces besides the recon Marines calling in fire support, I would recommend that we don’t have Marines trying to deter civilians racing towards the battle. If they’re that stupid, so be it.

Major Todd Breasseale of the Army also had some comments on this scene, including:

There really should be no spoken lines for the Forward Air Controllers (FACs) since by the time the war of the worlds starts with the Marines in their vehicles, the jets have all been rendered useless/ineffective/or burned (but please don’t burn any of the F/A 22s Raptors – the Air Force is really, REALLY sensitive about those) – yes, this is what my life has become.

Breasseale left the Army to become Assistant Secretary of Homeland Security for Public Affairs, before moving into similar roles at Facebook and Microsoft.  But now he’s back, like a serial killer released on a technicality, working for the DOD as Deputy Assistant to the Secretary for Public Affairs (Media).  I’m pretty sure this means that, in effect, he’s Glenn Roberts’ boss, overseeing the DOD Hollywood office, among other propaganda duties.

The overriding problem with the script, for the military, was that they were largely useless.  The aliens invade, Tom Cruise runs away, the military fire off some weapons that accomplish nothing, the end.  The DOD’s memo to the producers drew this out explicitly, suggesting dialogue about the need for the military to be seen rescuing civilians in the main war sequence and emphasising:

Presumably, they’d used up all their random die in place missions in Iraq and didn’t have any left for Spielberg’s movie.

The Pentagon’s objections resulted in a fairly major change to the ending, in Boston, where there is one final, successful battle between the US military and the tripods.  As the draft script had it:

Suddenly, ANOTHER TRIPOD, perhaps coming to the aide of its fallen comrade, emerges from the and of tha street behind them and walks forward. Staggers forward is more accurate, it’s barely able to stay on its feat. It SMASHES into the side of another building, bouncing off and taking another unsteady step forward…

…The Tripod takes another step forward, shakily, about to go clown.

It is at this point that Tom Cruise realises the tripod has no shield, points this out to some soldiers, and they fire off rockets to finish the job.  But this was revised to give a more heroic and effective image of the military’s efforts:

Pg 132, So 165 – BOSTON – THE OLD CITY. We believe it very important in this scene that at least the one tripod to be attacked is still fully operational – the alien occupant so far apparently unaffected by the disease. We see this as a hopeful sign that mankind in general, and the US military in particular would, in time, develop an effective way to destroy the tripods, one by one. Of course this is moot, since the aliens die well before there is any further action against them aside from this one scene.

Even though it didn’t serve the plot, and the Pentagon recognised this, they changed this sequence so that the final tripod is still rocking around, seemingly fine except for its shield not working, whereupon it is taken out by those brave Army boys.  Hoo-rah, beautiful and spacious skies, etc.

The script successfully rewritten, the only problems left were filming and release.  Apart from a flash flood at one location and a few logitistical snafus, actually shooting War of the Worlds worked out pretty well.  An Army report recorded how:

War of the Worlds. The filming is going quite well; the filmmakers took all of our suggestions, including how much “combat dirty” the soldiers would look (not very much, akin to Iraq). We were surprised to find that an actor had been hired to portray a soldier, probably an “insurance policy” in case none of the soldiers could serve as a squad leader, but, of course, the senior NCO served quite well, so much so that Spielberg added lines for him and the actor wasn’t used at all. The soldiers, all veterans of Iraq or Afghanistan, seemed to be having a good time. When filming ended in CT, Spielberg gathered everyone together for cake and thanked the Soldiers for the service to the country.

It isn’t clear whether Spielberg was thanking them for their service in fighting in Iraq and/or Afghanistan, or for appearing in this propaganda movie, but I guess it makes no odds.  Plus, more cake.  So much cake in these documents.

Another update from January 2005 states:

War of the Worlds. Met with the producer, director, and others at this picture’s temporary Fox studios location to discuss upcoming USMC portrayal as well as other re-shooting of extras and actors playing Soldiers in front of a green screen and in a water tank. Developed support plan with the 2nd assistant director. According to the producer, who has seen pieces of the edited project, “your Soldiers are (f-word removed) brilliant in this thing!”

However, the flattery was not so mutual.  The Army’s entertainment liaison office reports signal how they weren’t too impressed with the final product, and knew some reviewers felt the same way.  Officials attended the US premiere in New York and were somewhat underwhelmed by the reaction of critics:

War of the Worlds. After attending the US premiere and conducting numerous interviews with national and international press in NYC on 23 and 24 June, I anticipated rave reviews for the “sci-fi” aspect of this DoD (Army project officer) supported Spielberg/Cruise movie, but a panning of the story itself.

In the event, War of the Worlds actually did fairly well with movie reviewers, though audiences found it turgid and confusing.  Not least because this tale of military inefficacy was turned into more of a recruitment poster for them, to the detriment of an already weakly-executed plot.  I’m not saying the US military ruined this movie, I think Spielberg and Co would have done a fine job of that by themselves, but the Pentagon certainly did nothing to make it better.

US Military Documents on War of the Worlds (2005)